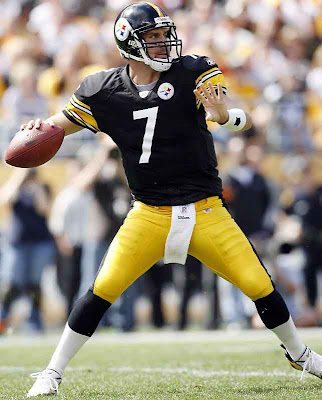 People, it is that time of the year and just like the Declaration of Independence, we hold these truths to be self evident: that all teams and players are not created equal. And the following truths are a lot more solid than the U.S. dollar, which may or may not be worth more than a rupee these days:
The Steelers are the class of the NFL
Eagle QB Donovan McNabb is Jekyll and Hyde, a football schizophrenic
Dallas QB Tony Romo is one of the best QBs in the league … when the games don’t matter
Denver QB Kyle Orton is who we thought he was and the Steeler defense reminded him of that.
The Ravens defense is what I said it was … old and figured out.
Ben Roethlisberger is in one body … a phenomenal QB and a complete dumbass

Last week’s picks: 10-3. This week: I am throwing s%$# like a monkey and hoping it sticks:
Niners 24 Bears 17. The Niners are pissing me off, but … it’s gonna happen. They are building a winner. They just need some more Lego pieces.
Falcons 27 Panthers 24. I am close to picking the Panthers cuz they realized what they had at QB and pinned his arm to his side and only allowed him to hand off the ball last week. Problem is the NFL defenses will figure that out, too. Hello 9 men in the box. QB Jake Delhomme can’t help himself, starts to call audibles and the INTs resume.
Dolphins 22 Bucs 17. The Buccaneers are on a roll. They won a game. And the rookie QB played pretty well. Hopefully they will keep the old uniforms and throw away the new ones. I don’t care what you say……..those creamsicle Buccaneer jerseys are the s$#@. They should at least wear them ‘til they lose … this Sunday that is. You know what, I’ve changed my mind. If the Bucs wear the creamsicles, Buccaneers 24 Dolphins 22. Those jerseys are worth 7 points at least. BUT if you picked up QB Josh Freeman this week for your fantasy team, you need therapy.
Vikes 31 Lions 20. Did you notice this week that Brett Favre’s started to talk about his latest physical ailments? Excuses, excuses, here they come.
Jets 23 Jaguars 20. I see that little fat Jabba the Hutt lookalike Rex Ryan has his mouth shut now. Funny how the Jets with Coach Rex, S Bart Scott and QB Mark Sanchez were talking all that s%$# earlier this year and the media was loving it. “The Jets are a breath of fresh air!”
Reality is you have to play and not just talk, bitches. I would pick the Jags if they weren’t so sorry.
Steelers 27, Bengals 10. The Steeler train is picking up momentum. The defense has S Troy Polamalu back.
Saints 40 Rams -4 (in fantasy defense points).
Vincanity Titans 23 Buffalo Wings 3. Why is it that if QB Vince Young goes 12-19 for 180 yards with 0 TD and 0 INTs but the team scores 34 points, the team has won “in spite of Vince Young.” But if Kerry Collins, Trent Dilfer, Jeff Garcia or Brett Favre have those numbers they are masters at MANAGING THE GAME. SOMEONE EXPLAIN THIS ONE TO ME … IN BLACK AND WHITE.
Redskins 24 Broncos 20. Upset special. The Broncos have begun their re-entry to Earth’s atmosphere. 6-0 will soon be 7-5.
Chiefs 4 Raiders 2. ExLax special of the week. Bring the sports section into the crapper and just try to wait it out. This game is unwatchable. By the way, you just know the Raiders will pick up RB Larry Johnson just because Al Davis has twisted ideas about this “rivalry.” Dear Al, when both teams suck, it isn’t a rivalry.
Cards 30 Seahawks 17. ‘Hawks fans are all fired up cuz they came back from 17-0 to beat the Lions, showing “character.” The first part of that statement says it all … they were down 17-0 to the Lions. Hawk fans should quit putting hemp in their Starbucks.
Packers 30 Cowboys 24. The Packers are struggling. Their defense is atrocious. The Cowboys are having fun. But the first sign of adversity and the QB will be whimpering like a bitch again and the spineless coach will turn his back and walk away from it and hope it goes away.
Eagles 30 Chargers 27. Don’t care really. Both of these teams are hit and miss and not going too far in the playoffs.
Patriots 29 Colts 20. The Colts are hurting and the Pats will take advantage of that secondary. By the way, when will the Colts cut Bob Sanders loose? He is hurt more than he plays. At some point, you need to cut your losses.
Monday night. This is the “Watch How I Met Your Mother Instead of Monday Night Football Special.” Baltimore vs. Cleveland? As the season progresses, they should tweak the Monday schedule to reflect a degree of relevance. If you didn’t know football and saw this as your first NFL game, you would turn off your TV and become a lifelong soccer fan.