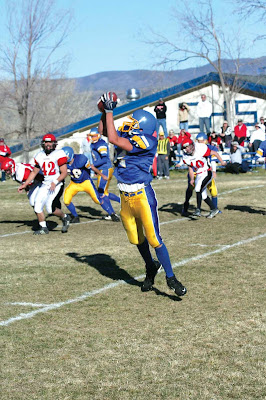 The undefeated Coleville Wolves 8-man football team advanced to the Nevada Division 1A championship game this Saturday with a 76-0 drubbing of the Tonopah Muckers at home last weekend.
The 11-0 Wolves have outscored their opponents 850-86 this season.
Saturday’s championship game will match Coleville against the similarly unbeaten 9-0 Pahranagat Valley Panthers of Alamo, Nev. The game will be played at Damonte Ranch High School in Reno. Kickoff is at high noon.
This will be the Wolves’ first trip to the state finals since 1992. They haven’t won a state title since 1971.
Pahranagat Valley defeated Coleville 128-74 in a semifinal playoff game last year.
This year, however, Colevile has shored up a defense which allowed 50 points per game in 2008. The Wolves are holding opponents to under 8 points a game this campaign.
Meanwhile, the offense is just as explosive, led by All-Everything Quarterback Jason Peters, who holds Nevada Division 1A state records for most TD passes in a season, total offense in a season, passing yardage in a season, career total offense and career passing yardage.
This year, Peters has thrown for 1,714 yards and 39 TDs. He has not thrown an interception.
He’s also rushed for 23 TDs this season.
His leading receiver (pictured above) is Junior Emmi Sandoval, who has caught 22 TD passes this season.
Sandoval also scored the Wolves’ second TD of the day last Saturday when he returned an interception 52 yards.
Lunch spent much of the first half taking photos next to a nice woman who turned out to be one of the players’ mothers.
Lunch: Which one is yours?
Mom: He’s the mean one, #11, the quarterback (Peters).
Lunch: Who does he get the mean from? Mom or Dad?
Mom (with a chuckle): Probably me.
Fortunately for Mom, the Wolves prevailed. As she said, “He’d [Jason] be impossible to live with if we’d lost.”