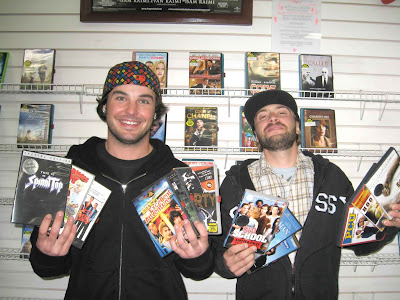 Miller (left) and Vuke take on the establishment. (Photo: Wolf)

Read the following in a deep and ominous movie trailer voice:
“In a world where neighborhood video stores are collapsing under the menacing fist of oppressive Netflix and redbox rental companies, one little video store stands alone.”
Boom! (Fade into a no turnaround slow motion walk away from a massive explosion a la the motion picture: Desperado)
Local entrepreneurs Alex Miller and Rob Vuke are the confident new owners of Take 2 Video in Mammoth Lakes. The purchase, though seemingly nebulous, is actually a mindful move by Miller and Vuke, who firmly believe they can play the role of David while competing against corporate Goliaths such as Netflix and redbox. To uncover their business strategy and find out just what the heck they’re going to do with all those VHS tapes, Voke and Miller spent a few minutes with the Sheet.

Sheet: So I hear you’re actually moving out of this store.
Miller: Yeah, we were supposed to move into Performance Angler’s space on Nov. 1. They haven’t left yet soooo … we’re anxiously waiting to make the move.
Sheet: It’s a smaller space over there, so what are you going to do with all those old VHS tapes?
Vuke: We’re trying to get rid of tons; we’re selling them for 2 bucks apiece or 5 for 5. See any you like?
Sheet: Maybe, I’m good for now. Will it be sad for you guys to see any of those old tapes go, like all of those Dolph Lundgren movies?
Miller: Hah, were actually going to keep some of them for a classic VHS section in the new store. It’s crazy because some of those films you can’t even get on DVD anymore.

The interview is briefly interrupted when Rookie Sheet Spokesmodel Matt Gushka finds a personal favorite, “The Wizard” on VHS.

RSSM Gushka: Holy s%$#! Can I buy this?
Vuke: Yeah, please take it.
Miller: That’s 2 bucks.
RSSM: Nice … now I just need a VCR.
Sheet: Look at that, ask and you shall receive! How about some Blu-Ray movies?
Miller: Yeah for sure, we need to make some more money first but that’s definitely on the investment list. We’re currently purchasing older movies on DVD and we have all of this year’s ski and snowboard movies.
Vuke: Once we make the move, we’re going to carry video games too.
RSSM Gushka: You should just get Madden.
Sheet: That would be sweet. I thought you guys already carried Wii games. I was here the other day and this employee was playing Tiger Woods in here.
Vuke: He doesn’t work here anymore.
Sheet: Huh … bad Wii player I guess. I have to ask, have you been following the fall of Blockbuster? What are you guys going to do to compete with companies like redbox that can purchase thousands of videos and slash their prices?
Miller: Have you ever rented one of those redbox videos?
Sheet: No … yeah.
Miller: It’s a limited selection and they’re always scratched. There is no customer service with those guys. If your movie doesn’t work, we’ll take of it and give you a free rental. We have way more control over the quality of the product and we clean our movies regularly with a cleaning machine.
Vuke: It’s called the DMI 3500-Deep Buff.
Sheet: Sounds exotic … and fun.
Vuke: Yeah, we can fix broken DVDs, too. So if you have a scratched disc we can probably repair it for you.
Sheet: I’d like to see redbox do that. But aren’t you nervous about the popularity and convenience of Netflix and On Demand?
Vuke: I think the only place a video store can survive is in a tourist town. People are away from home, they’re on vacation, and they want to easily get a movie or a snowboarding flick.
Sheet: Or Porn.
Vuke: Yeah, thank God we don’t have any of that crap anymore.
Sheet: What happened to it all?
Vuke: The old manager felt like it was too old or vintage or something. I guess he just threw it all out.
Sheet: Man, some employee taking out the trash at Subway was probably like, “Jackpot!”
Miller: Ha, It actually could still be hidden in the back somewhere; I guess we’ll find out when we move. It’s weird because people come in and ask for it sometimes. I don’t think I could handle it though … I mean literally, the cases would be disgusting.
Sheet: Let me know if you do find any in the back … not because I’m into that kinda stuff … but because it will be really funny. Okay, since you’re moving, I came up with a couple of new store names for you guys. Just tell me what you think.
Vuke: Got it.
Sheet: How about Take…3? Eeeh?
Miller: Yeah, I kinda like it.
Vuke: It’s good. It’s like Take 2 but (pause) one more.
Sheet: Alright, how about Take All of Our VHS Tapes?
Vuke: That might be a good idea for about a week; we have a lot to get rid of.
Sheet: Okay, this one has more of a movie theme to it, Take 2: Out for Vengeance?
Vuke: Yeah, that’s an awesome name … but it might send the wrong message.
Miller: Thanks for the suggestions, but I think we’ll just keep the name; it seems to be working alright.
Sheet: What does it mean anyway?
Vuke: It means if you rent 2 videos you save a buck.
Sheet: No, s%$@? Yeah, that’s a good name.