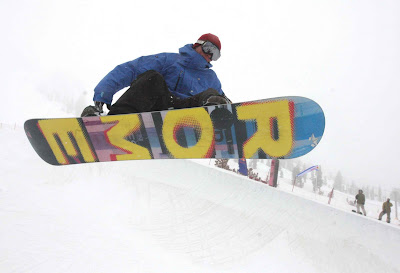 Concussions a cause for concern among snowboarders

When taken to its extreme, snowboarding is high on the “Wow” factor.
From the crowds that line Mammoth’s Unbound Terrain Park to people sitting in their living rooms watching the Winter Olympics, snowboarding is a sport that can take a spectator’s breath away.
Performed at its highest levels (as is regularly done by Mammoth-based pros like Danny Kass, Mason Aguirre and Greg Bretz and regularly attempted by people not as skilled or experienced), snowboarding seems to not only defy gravity, but flip off Sir Isaac Newton himself. Snowboarders launch gaps more than 60 feet wide. They do twisting backflips two stories above Superpipes that are more than two stories deep and as hard as concrete.
Unfortunately, it’s awfully tough to win when you take on Newton’s laws of motion, no matter how well you can shred. Big air and sick speeds inevitably mean big, nasty falls, which is why snowboarding is also soaring dangerously higher on the “Whoa, man, he got knocked the hell out” charts.

Newton’s second law of motion states that the greater the mass of something being acted upon, the greater the amount of force that will be required to move it. In layman’s (or knuckle dragger) terms, this means that when a smaller thing like a launched snowboarder hits a larger thing like snow packed down as hard as pavement, the snow as hard as pavement, the snow is going to win. Newton’s theory is indisputable evidence that snowboarders will just about always be the latter in the infamous equation sung about by Dire Straits, “Sometimes you’re the windshield, sometimes you’re the bug.”
The scary part is that more snowboarders (and to a lesser extent skiers, too) are playing the role of bug. A handful of studies done in winter sports meccas like France and Canada have shown that traumatic brain injuries to snowboarders are on the rise as the first decade of the 21st century comes to a close. They cite the growing popularity of snow parks and the tendency for riders, especially males under the age of 35, to push the limits of speed and air-time.
Between 7% and 15% of all reported snowboard injuries involve the head, considered to be the most serious injuries a snowboarder can suffer. While broken wrists and forearms are the most common snowboarding injuries and can be quickly healed, busted brains don’t bounce back as quickly.

In an article published in last month’s New Yorker, author Malcolm Gladwell, with the help of some of the country’s foremost neurologists, argued that because concussions are so widely accepted in football and repeated concussions can do long-term damage (including causing sufferers higher rates of clinical depression, emotional disturbances and memory-related diseases and the premature onset of dementia), football is no more enlightened a sport than dog fighting.
And, quite frankly, fans of the sport don’t care. As Gladwell wrote, “We are in love with football players, with their courage and grit, and nothing else—neither considerations of science nor those of mortality—can compete with the destructive power of that love.”
It’s easy for those of who live in snowboarding havens to change out the “football players” in Gladwell’s statement for “snowboarders.”
“Ollie McTwist” is the pseudonym of a former high school football star turned pro snowboarder. Ollie once explained, while still in the aftershock of a concussion, that (as in football) getting knocked out occasionally was pretty much par for the course in snowboarding too.
“It happens to just about everybody. It’s definitely worse in football, but it happens in snowboarding,” Ollie said. When asked what it was like, he responded, “You just sort of feel funny. You just try to shake it off … but it’s scary.”
A sentiment backed up by his father. “He breaks a lot of helmets snowboarding. It scares me,” Ollie’s dad said. As it should, according to testimony on concussions recently given to Congress by Chris Nowinski, a former college football player and current co-director of Boston University’s School of Medicine center for studying brain trauma. “Hitting your head thousands of times appears to create a disease that slowly and quietly causes your brain cells to die.”

Though to a much smaller degree than pro football, snowboarding is still big business. Most professional boarders make more than six figures a year and the sport’s biggest star, the “Flying Tomato” Shaun White, is easily one of the most famous (and well-marketed) people in the world — especially for males under the age of 35.
Dawn True, Manager and Buyer for local snowboard shop Wave Rave, has two young boys well under the age of 35, Odin, 12 and Morgan, 10, who look up to the likes of Shaun White.
“As a responsible parent, I think that if I buy them a pass, I’ve got to buy them a helmet,” said True, who added that helmet sales at Wave Rave have been steadily increasing during the last several years.
It’s estimated that wearing helmets reduces injuries up to 60%, which may not be that reassuring, particularly to anyone who’s ever seen the movie “Anchorman: The Legend of Ron Burgundy.” One of the movie’s biggest jokes involves the success rate of an aftershave that works about as often as snowboarding helmets claim to. “Studies have shown that 60% of the time, it works every time.”
Despite wearing a “brain bucket,” True’s oldest boy fell in Mammoth’s Main Lodge Unbound Terrain Park last season and suffered a concussion. Dawn said she was grateful for the care Odin got at the hospital and for the care other local riders gave her son after watching him fall, when they stopped him from taking the lift back up and brought him medical attention.
“He was vomiting and he was scared,” she explained. “So I took the opportunity to just tell him, ‘Don’t be that guy, the guy who pushes it too far.’”
That guy. The guy who’ll try anything, who’ll push any limit. That guy who’s willing to knock himself silly to get the biggest air or do the latest, sickest trick. The guy who’ll try defy the laws of Newton just to get the biggest “wow” from the crowd, because he just might be the same guy who gets the biggest “Whoa, man his brain is a mushy mess” when he’s older.