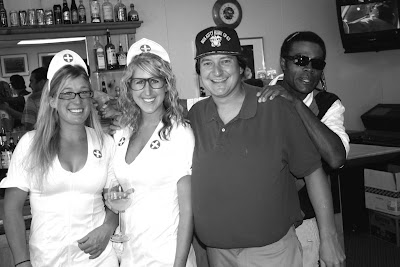 Hernandez (second from right) at the 2008 Lakanuki Open. Note: Photo illustrates one should always make sure the newspaper has a good file photo of you. (Photo: Sheet File)

And he’s got the hardware to prove it

15 screws, 7 plates and 2 rods. That’s the hardware holding Chris Hernandez together these days.
Girlfriend Lisa Dewey agrees, her significant other is bound to have a hellish time getting through airport security next time he tries to board a plane.
Given what he’s been through the past three weeks, however, it’s hard to imagine he’d mind.
Hernandez, one of Mammoth’s more beloved characters, appears to have cheated the reaper following a horrendous snowboarding accident on Mammoth Mountain Dec. 15.
He came out of two-and-a-half weeks of induced sedation this week, and while the road ahead promises to be long and arduous, at least there’s a road ahead.
Based on conversations with Dewey and Travis Thompson, who was skiing with Hernandez the day of the accident, we’ve compiled the following narrative.

Travis Thompson just happened to bump into Hernandez the morning of Dec. 15 at the bottom of Chair 2, so they decided to ride together. Hernandez was on his board and Thompson was on skis.
Though the pair are friends and have skied together as part of larger groups, Thompson said they’d never just skied together themselves.
They went from Chair 2 to the upper gondola, and from there, decided to ski down to the Paranoids, which Hernandez had ridden the previous day (which had been a powder day).
From the top of the mountain, they skied down Roadrunner around the back to where Roadrunner filters out at the top of Chair 14.
The run out to get to the Paranoids generally requires riders to build up a lot of speed to carry them uphill to the drop-in.
Though Cat crews had cleared Roadrunner overnight, the wind was blowing uphill and creating “wind lips” on the narrow Cat track.
Thompson, who was skiing about 30 feet behind Hernandez, slowed down when he encountered the lips.
In front of him, he could see Hernandez hit the lips and pop up once, twice …
A gust of wind blew and temporarily obscured his vision.
“I thought I’d been temporarily blinded and that he was still in front of me … but when I saw his line go off-trail, I stopped.”
There was no sign of his friend.
Off to his left, there was a very steep pitch leading to nowhere, as the backside was closed that day.
The location? At the bend in the trail just before it curves back to the right and intersects with Skyline (the trail which comes down off of Chair 23).
Thompson skied forward to where Roadrunner intersects with Skyline and looked back. From that perspective, he could see his now immobile friend, head downhill, facing upwards, with his board and legs bent over him, sprawled amidst some boulders.
He tried his cellphone to call for help. No reception. He then waited an agonizing three minutes until a group of skiers came down Skyline.
He told them to go get ski patrol.
Thompson then made his way over to Hernandez on the steep 45-degree slope. Hernandez was unresponsive, but he was breathing. His helmet was crushed in, but it had held. It was significantly thinner, however (Thompson held his thumb and forefinger about a centimeter apart to indicate the post-impact thickness).
Thompson kept the head and neck stable and waited some more.
“All I could do was talk to him,” said Thompson. And think about the people who loved him. And wish that he had been leading the way down Roadrunner instead of his buddy so that perhaps he could have slowed him down and prevented the accident.
Patrol was on-scene within 10 minutes, and Thompson helped patrol load Hernandez onto a stretcher.
“When I was lifting him and touched his back, it was mush,” said Thompson.
When patrol got the oxygen mask onto Hernandez, he became combative, flailing, trying to rip the mask off his face. Ironically, he kept complaining about his shoulder, the one body part which seemingly wasn’t injured that day.
One patroller had to ride on top of Chris on the stretcher, straddling him and holding his arms to prevent him from tearing the mask off.
Lisa Dewey got the call at work that Chris had been in an accident and met his brother Todd at Mammoth Hospital. Hospital Staff stabilized Chris so that he could be flown to Renown Medical Center in Reno, but on the initial drive to Mammoth-Yosemite for the flight out, his lungs collapsed and he stopped breathing, so they had to return to Mammoth Hospital and stabilize him again before he flew out.
The accident occurred at 10 a.m. He finally flew out by 10 p.m.
By the next day, Chris’s mom and two brothers and Lisa and her mother were in Reno.
From there, the good news and bad news ping-ponged. A look at the first MRI said no back surgery. But then, his blood pressure kept dropping, leading to a second MRI which revealed that Hernandez’s fourth thoracic vertebrae had burst.
As Dewey said, “Chris had more fractured vertebrae than non-fractured … his entire back looked like [that of] a Smurf’s.”
That first day, though he had been on a lot of pain medication, Hernandez was lucid and could communicate.
After the extent of his injuries became apparent, doctors decided to place him under heavy sedation. That time frame was from Dec. 16-Jan. 4.
During that time, doctors operated on one femur (which was broken just below the hip) and performed back surgery.

Never mind the broken hip or the five broken ribs.
With the injury to his spine, Chris has feeling in one leg but can’t move it. The other leg moves, but he can’t feel it.
“They won’t know for a year what nerves and/or feelings he’ll regain,” said Dewey. “Some stuff may come back sooner.”
All that said, he’s on the comeback trail. They got him off the ventilator on Thursday. He’s got a trachea tube in, but they’ve given him a device so that he can speak. And fortunately, he’s still got his libido.
According to Dewey, some of his first words were related to making sure she was taking care of his mother.
Then, “Hey, you’re pretty hot.”
From Dewey: “I am so overwhelmed with the way in which everyone has responded. I always knew that Mammoth was an amazingly supportive town, but I have never been on the receiving side. I started to freak out a little when everyone kept asking about money and fundraising, so we have asked Kama Newbry to speak on our behalf for fundraising, as our minds are elsewhere. Kama’s number is 707.498.8023. For general updates on Chris and his condition, we are asking that people check his Facebook page http://www.facebook.com/ChrisHernandez.Page rather than call. “
Lisa would also like to thank the Kukulus family, as she is staying with Fred Kukulus’s son Alex in Reno.
As for that helmet, Lisa says Chris jokes that he’s going to send it back to Burton for a replacement.