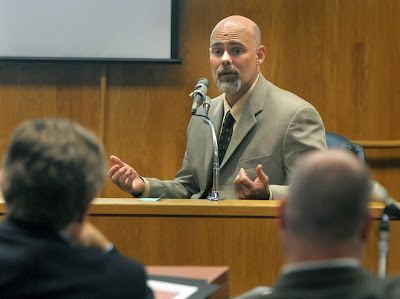 In many cases, says Mammoth Lakes Police Officer Jesse Gorham, you don’t get the payoff. The innocent victim doesn’t get justice and the bad guy doesn’t get punished.
But last month, almost eight years to the day of an attack on an innocent woman at Mammoth Mountain Ski Area, justice was served in Santa Barbara County. Sex predator Steven Neff, 42, of Goleta, who tackled and then injected a date-rape drug into a woman skiing off Chair 12, was sentenced to 23 years in prison by Judge Rick Brown last month.
Though Neff admitted to the ski area attack, that’s not what he was tried for. He was actually tried and convicted for two other attacks which occurred in Santa Barbara County. But it was evidence gathered at the crime scene in Mammoth which proved pivotal in his prosecution on two counts of attempted unlawful penetration and additional enhancements.
Gorham, who has served 12 years with the Mammoth Lakes Police Dept., including two stints as detective from 2001-2003 and then 2006-2007, says the resolution of this case represents the proudest moment of his career.