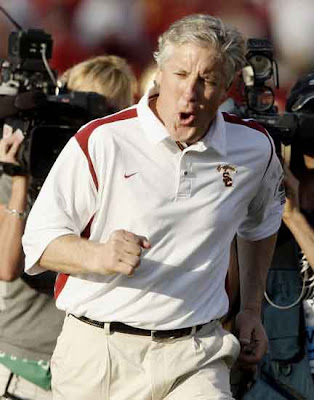 Pete Carroll will call the shots as the new coach of the Seattle Seahawks. (Photo courtesy OregonLive.com)

The Playoffs have begun. And after last week going 0-4 on picks I am not allowed to pick any games this week and have revoked my own keyboard privileges. That was terrible. The worst part is if I had bet any money, I probably would have finished 3-1 against the spread. But when I start talking smack and want to piss off Marv and/or anyone who likes the Jets, I pick with my hope, not my head.
Last week …
Pats vs Ravens. The Pats ARE DECIMATED. They got beaten by a team with a QB who was 4-10 for 34 yards with an interception and a QB rating of 10.0. That is 10.0 out of 158.3. The Ravens basically said, “WE CANNOT THROW THE BALL. We are going to run it on 1st, 2nd, 3rd and 4th down as well as extra points.” And the Patriots couldn’t stop them.
I know there are some folks out there who say the Pats traded away vets like Richard Seymour so they could reload for next year, but the problem with that reasoning is that the Pats just haven’t drafted well in recent years. You can stock up all the draft picks you want, but if your scouting department makes mistakes, you’re screwed.
Jets vs Bengals. The Bengals said they were a running team and physical on defense. Well, they got the first part right, as Cedric Benson ran for 160 yards. But they still lost. Their defense gave up rushing yards as if everyone were preparing for a tryout with the Patriots. And the Bengals don’t know how to throw the ball. They looked miserable and outcoached.
Packers vs Cardinals. That looked like Arena Football. There wasn’t a defense on the field between the two of them. Charles Woodson won the Defensive Player of the Year, but after seeing that game, they should take it back. And Aaron Rodgers played his ass off. The Packers should have called a timeout after he got hit the play before because he took one in the helmet and looked punch drunk.
Everyone is pushing Cardinal QB Kurt Warner for the Hall of Fame after that game. Now hold on. Even I can complete passes when the WRs are wide open on every play. None of the passes were contested.
The Pack can now legitimately say anything they want to about Brett Favre. Rodgers played his ass off. If you put up 45 points in a playoff game and lose, it isn’t the QB’s fault.
Eagles vs Cowboys. This one went how it should have. The Eagles have had issues all year with the Cowboys d-line and that didn’t change. But I still don’t believe in the Cowboys.
You know who Eagle Head Coach Andy Reid reminds me of? Bill Cowher. Cowher was the Steelers coach for 15 years and went to 2 Super Bowls, but it took him 14 years to finally win the big game. He went to 7 AFC championship games, too.
His weakness? He refused to change up his offense and make it versatile and couldn’t win the big games.
Reid’s problem is that the Eagles still can’t run the ball at all.
After 11 years.
This week … note NO picks …
Cowboys vs Vikings: I hate the Cowboys, but this is one week I am pulling for them. I’m just SO tired of hearing about Favre. The Vikings lose this game, and maybe it’s time to send them home wondering, “After all this, what did we get versus last year? Not a damn thing, except a year behind in finding our future franchise QB.”
Colts vs Ravens. If the Colts were smart, they would put 9 men in the box and tell their DBs to play off 7 yards. If the WR runs by you, don’t panic, just turn towards the QB before you put your hands up so they can’t call pass interference, because that’s all they have. Tell the DEs they can’t just run upfield blindly, just mind your assignments. All the Ravens can do is run the ball, throw up a long pass for pass interference or throw it to TE Todd “Scrap” Heap. The Ravens corners can’t cover the Colts WRs.
Cards vs Saints. They may need to keep some spare artificial turf handy, because these teams may wear it out. The Saints’ problem is they didn’t play well in the last weeks of regular the season and now they’ve sat for 2 weeks. Can you say Rustoleum?
Jets vs Chargers. The Jets are more talk than game. The Chargers have a bunch of offense. Thing is, I can’t stand either coach. Jet Coach Rex Ryan is an idiot nobody wants to hear from, especially when the team self-destructs, as it inevitably will. They had some luck this year, but I think it will run out next year. He and Buddy Ryan will be able to change their coaching bios to read the same thing: “Big-mouthed idiot better as a defensive coordinator than head coach.”
By the way, if I hear one more person talk about how Rex Ryan built the Ravens’ defense, I will punch them square in the mouth. That defense was at its height from 1999-2001 when Marvin Lewis was the Defensive Coordinator, not Rex Ryan.

In coaching carousel news, the Seattle Seahawks hired away Pete Carroll from the USC Trojans. Good move? Let’s start with him as a pro coach. Prior to USC, he took over the Pats the year after they won the Super Bowl and promptly led them to 10-6, then 9-7, then 8-8 records. So he inherited a Super Bowl team and ran them into the ground. Maybe he has changed his approach since, but his problem as a pro coach was his nature. He was soft and the players ran him. What do you think he will do with a team coming off a 5-11 season?
Speaking of Carroll, don’t believe any of his bull that he is leaving “because it’s time.” He’s leaving because the school is being investigated for recruiting violations and the guy who created the mess is simply leaving before he has to suffer the consequences. Another outstanding role model.