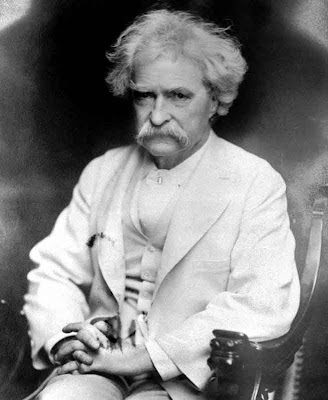 “Whiskey is for drinking. Water is for fighting over.” -Mark Twain (Photo: Historical, Public Domain)

You’d think it would be the other way around, but it seems that author-newspaperman Mark Twain was right when he observed, “Whiskey is for drinking. Water is for fighting over.” It was true in the earlier days of our country’s expansion into the west, and still applicable today.
Mono County is in the process of evaluating a controversial, though nonetheless interesting, water rights issue which has been ongoing since 1992. The dispute involves not only rights to water that exists across state lines (California and Nevada), but also whether those rights should be leased or otherwise transferred, how and by/to whom.
It started as a complaint filed jointly by the U.S. government & the Walker River Paiute Tribe. The U.S. has claims of its own, but also on behalf of the tribe, because of its trustee role through the Bureau of Indian Affairs. The Paiutes, meanwhile, are seeking water rights for land that’s been added to the reservation since the original Walker River Decree allocated surface water in the basin. Then there’s a non-profit organization, the Walker Lake Working Group, trying to intervene and make a legal claim to rights on behalf of Walker Lake.
Those are the plaintiffs.
The defendants are, in short, every single surface water rights holder in the Walker River Basin, from Walker Lake up to Bridgeport, and certain groundwater rights holders. The list of defendants is at least 11 pages of single-spaced type, and numbers in the hundreds.

The dispute, while formally taking shape in the early 90s, actually has its roots in the 1970s, when an interstate allocation was approved by both California and Nevada legislatures. The U.S. Congress never ratified it, though it has been used ever since, operating as if it were law, since both states agreed to it.
After the litigation was filed in ’92, it was tabled for a number of years starting in 2003 while a mediated solution was sought. The mediation involved plaintiffs and defendants that are government entities, including Mono and other counties, and tried to resolve the litigation. According to the County, there’s money available to resolve many issues, and certain ideas have been put forth, including cloud seeding and compensating people for making their water available downstream, but despite such optimism, by the summer of 2006, mediation had proven fruitless.

Show me the money

Efforts to resolve the issue have, as one might expect, meant an infusion of government money, which some may regard as “pork,” and lots of it, too.
Recently, Senator Harry Reid (D-Nev.), who finds himself embattled over growing unpopularity relative to his part in the U.S. Senate’s crafting and passing of its version of the controversial healthcare reform bill, obtained large appropriations through Congress. Reid, who said he’s “trying to save Walker Lake,” appropriated money via the Farm Security and Rural Investment Act of 2002 to the tune of about $200 million, part of which can be used for the Walker River situation “to provide water to at-risk desert terminal lakes,” specifically Pyramid, Summit and Walker Lakes in Nevada. In the Energy and Water Development Appropriations Act of 2006, $70 million was dedicated to the University of Nevada to “acquire from willing sellers land, water appurtenant to the land and related interests in the Walker River Basin, Nevada.”
The money’s original, chief purpose: acquire land and water rights, though only in Nevada.
Fast forward to the present and HR 3183, better known as the Energy and Water Development and Related Agencies Appropriations Act of 2009. This bill’s provisions “reference” the 2006 appropriation, and also include language for a three-year pilot (or “demonstration”) water leasing program. The difference here is the prominent inclusion of the word “leasing.” As opposed to an outright sale, leasing is generally considered more favorable to “upstream interests” because it doesn’t necessarily take land out of agricultural production permanently.
When you have money to buy out farmers, as in acquisition programs, if a farmer decides to sell, the land essentially is taken out of business … for example, it returns to sagebrush or becomes a subdivision. Contrast that to leasing, in which farmers not working certain parts of their land, or conserving water, can benefit from “renting out” their water until they’re ready to use it.
And there are other hitches. For one thing, California state law says an owner can’t transfer his/her water rights if that transfer causes some injury to a neighboring water rights holder. And even something as seemingly innocuous as leasing, if taken to extremes (such as a 99-year lease, one that will outlive the current rights holder), can look like acquisition.
The program authorized by HR 3183 provides $25 million dollars for a water rights leasing program that would be administered by the Walker River Irrigation District (WRID), pursuant to an agreement with the National Fish and Wildlife Foundation (NFWF). An additional $10 million dollars is available for restoration programs. In the earlier 2006 legislation, funds were provided for water purchase only: there was no leasing component. HR 3183 added the three-year pilot leasing program, and made that program available both in California and Nevada. Mono County successfully opposed another part of HR 3183 that would have extended the water purchase program into California as well. Its position on the leasing program was that it should not be implemented in California until local input and buy-in could be obtained. A resolution adopted by the Mono County Board of Supervisors at the time HR 3183 was pending states its opposition to California’s “inclusion into the leasing program AT THIS TIME.”
Late Supervisor Bill Reid, whose district is directly impacted by this legislation, took the matter to the office of Senator Barbara Boxer (D-Calif.) last year. Boxer, in turn, approached Reid. “She talked and he listened,” said Assistant County Counsel Stacey Simon, who’s been looking after the legal ins and outs, along with Supervisor Vikki Bauer, point person on Mono’s Board of Supervisors since Bill Reid’s tragic passing.
It was agreed that Mono County should have a chance to study the situation and gain local input prior to the implementation of the pilot program. As Simon described it, the appropriation may not be used to purchase water in California, but a portion of it may be used to lease water, at least temporarily. “What the Board asked Congress to do, vis a vis the purchase program situation, Congress did,” she points out. “It was a huge victory for the Board, and for Bill Reid in particular.”
What about the initial lawsuits pursued by the government and the Paiutes? They’re still pending, but could be resolved depending on the success of other efforts, including the water purchase and leasing programs. Any leasing, acquisition, conservation, cloud-seeding or any other programs are all ways to address the concerns that are being raised in litigation, the County says.
You can’t, in and of itself, end the litigation through those measures, but as a practical matter, if you give the plaintiffs what they’re seeking, or at least enough of what they’re seeking that it’s not worth them pursuing their litigation, that litigation may get dismissed by the plaintiffs, themselves. That, Simon thinks, is the hope of many involved in the issue. Otherwise, only the lawyers are actually making out on the whole deal.
“There are those who may say, ‘No acquisition, no leasing, no nothing,’ but nothing does not appear to be an option,” Simon stated. “There is litigation out there and it has to be resolved. Not a single substantive issue relative to any of the water rights has been decided.”

Meanwhile, back at the ranch

Several members of the ranching community have said they favor the implementation of a leasing program in California. The County’s goal is to ensure that it is managed properly, with no unintended consequences for either the County or its users. (Within Mono County at least, no money exists for water rights purchases, but there is some funding for limited leasing as previously noted.)
It was reported to the Board that Sen. Reid’s office has been supportive of the County’s request that implementation of the leasing program be delayed in Mono County.
“It’s important for everyone to know and understand their roles, as the money is rolled out,” Bauer said. Bauer and Simon were to have a meeting with NFWF representatives this week, along with Benny Romero, who’s long been following the issue on behalf of Mono’s ranching interests. A further meeting with WRID has been set for Jan. 26.
One facet of the program yet to be addressed: whether any new environmental analyses would be needed as per the National Environmental Policy Act.