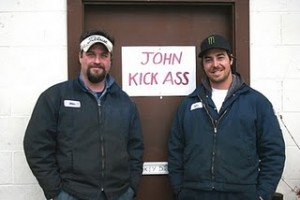 Alpine Garage’s Johnny Teller (right) was left out of the Olympics, but his American counterparts may not have been up for the job. (Photo: Wolf)

Skier Cross made its debut in the Winter Olympics on Sunday, Feb. 21, and Switzerland’s Michael Schmid went into the history books, taking home the sport’s first gold medal as part of the 2010 Games in Vancouver. Meanwhile, U.S. athletes Casey Puckett and Daron Rahlves were nowhere near the top 10, finishing 23rd and 28th, respectively. (Silver went to Andreas Matt of Austria, Bronze to Audun Groenvold from Norway. Canada, which was expected to do at least reasonably well, managed to put  Chris DelBosco in fourth, and France’s Enak Gavaggio rounded out the top five.)

Earlier this month, Puckett was nursing a separated left shoulder and Daron Rahlves was recovering from a dislocated right hip. With both injured, many in the sports community pondered the rationale being used by both United States Ski and Snowboard Association (USSSA) CEO Bill Marlot and skier cross coach Tyler Shepherd who insisted that Puckett and Rahlves would be 100 percent by the time racing commenced.

Maybe they were both able to ski, but being able to bring it full on was arguably another matter. Previously, Shepherd was quoted as having said Rahlves and Puckett need to be 100 percent if the team hopes to bring home a medal, especially a gold. “The gold medal is not going to be won by going 80 percent,” he stated. Shepherd was right on that point at least. In light of the poor results, it’s questionable as to whether Puckett and Rahlves were up to the task, as Marlot and Shepherd maintained.

The skier who was 100 percent, Johnny Teller, sat at home, skied the local Village Championship race series, and watched the Olympics from afar. Teller, who finished sixth at the recent X Games, was considered by many — Puckett included — as a logical choice to replace the injured team members.

After the race, the media spin attempting to take the edge off what may have been a poor decision by the U.S. coaching staff seemed to be taking effect. “Rahlves’ spill off the second-to-last jump during the first round was particularly exciting. The alpine master, who was sitting second in his heat at the time, went down on his back only to get back on his feet and make a photo finish of the race, of which he was unfortunately on the wrong end,” read part of story on www.utahskier.net.

The skiers themselves were apparently spinning out of control, too.

“I never have regrets. I’m out there having fun. I still had fun today,” Rahlves said in the story. “The ultimate is just to love what you do and go out there and give it a shot.” Rahlves, however, insisted he was ready for Sunday’s race. “I felt ready to roll. Today was the outcome I didn’t really expect it. I thought I was going to be moving through to the finals,” Rahlves said. “I felt great. I’ve been skiing hard and as of yesterday I had zero pain in the hip. I was still doing physical therapy every morning. To be back this way three weeks after dislocating my hip was a pretty outstanding recovery.”

Outstanding, it turns out, may not have been good enough.

Meanwhile, Puckett, who made little or no mention of his shoulder injury, was unable to generate enough speed, which he said probably cost him on Sunday. “The start is really important and I wasn’t able to get out of the start really well,” Puckett told www.utahskier.net. “There’s a little bit of apprehension when I’m going down a course like that — huge air coming down from pretty high heights. There’s nothing else I could have done. I did everything I could. I’m proud I was able to make it here, and I laid it out there.”

Of course, one can only speculate how the U.S. team would have done had they brought Teller up in one of the slots, but in any case it’s at least a curiosity that Rahlves and Puckett were kept on the team and fared so poorly.

Locally, Teller finds himself currently in the top spot in the Mens A category of the local Village Chamionships race series.