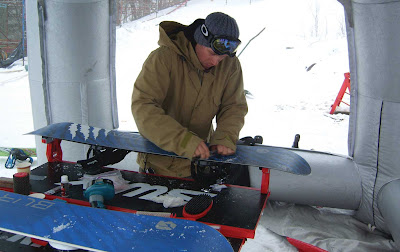 Kenny Nault working on on Terje Haakonson’s board at the Arctic Challenge in Norway the year Haakonson broke a world record. (Submitted photo)

But he won’t do shots with Bode

Behind every great snow athlete there’s a great ski tuner. Long hours, extensive travel and back breaking labor make up the life of this proverbial ski caddy.
For many top pros, Swix Global Freeski and Snowboard Manager Kenny Nault, 30, of Mammoth Lakes, is the person they call when they need it done right. Nault’s abbreviated resume includes tuning Terje Haakonson’s board when he broke the world record at the Arctic Challenge in 2007 and tuning for numerous X-Games medalists like Shaun White, Torah Bright, Kelly Clark, Jon Olson, Mason Aguirre and Danny Kass.
“If there’s a big name in freeride skiing or snowboarding I’ve probably worked with them,” says Nault. But this season he gets to add another page to his resume. Taking a break from tuning at local ski and snowboard shop P3, Nault is headed to Whistler, B.C., to grind boards for the U.S. Olympic Snowboard team. The Sheet hung out with Nault last Tuesday at P3 as he gave us the 411 on ski tuning, Twittering and the Olympics.

The Sheet: Every time I see you you’re wearing the same outfit, black t-shirt and jeans. Are you trying to imitate Rusty Gregory’s look? Is there some secret dress for success model I don’t know about?
Kenny Nault: You know, he tucks his shirts in, I don’t. I don’t really know the guy but he should try the un-tucked look. It makes you come across as easy going.
Sheet: Dude, you’re going to the Olympics! How did that come about?
Nault: In a nutshell, back when I was 19, I raced boardercross at Keystone and paid the bills by working at a local shop tuning boards. I worked with a guy named Franklin Crowe, who at the time was the Swix Manager. He taught me the ins and outs of good ski tuning. Through that experience, I got a job with Dominator Wax running their snowboard program. I made a move to Mammoth in 2002. Then in 2006, Crowe asked me to help him with U.S. Olympic team, which at the time included athletes like Ross Powers, Gretchen Bleiler and Kelly Clark. I got to tune their equipment and help them through qualifiers but I didn’t actually get to go to the Olympics that year because of budgeting reasons.
Sheet: That’s a bummer.
Nault: Yeah, it was a bummer. But then Crowe retired and I took over the Swix Team.
Sheet: Non-bummer! So, it’ll be your first time at the Olympics. Are you nervous?
Nault: No, not really. I’ve been doing it for so long you only get nervous right before the athletes’ first run. After that, you can take a breath.
Sheet: Aren’t you afraid you’re going to screw up someone’s board? I mean this is the Olympics were talking about.
Nault: Knock on wood. It hasn’t
happened to me yet. But I’ve seen it happen.
Sheet: Are there any events you want to see while you’re there besides half pipe and boardercross?
Nault: I’m hoping to catch some downhill and maybe a hockey game.
Sheet: You are so lucky. So what makes you better than me? I can scrape a board. Can I go with you to Whistler?
Nault: Sorry. There’s quite a lot to it. I actually just got back from a week with the head chemist at Swix. They spend a lot of money on research and development. A good tuner has to do his homework.
Sheet: Kind of like a PGA caddy.
Nault: That’s a fair comparison. I would say my job is more of a mix between a PGA caddy and a NASCAR pit chief. You’re the athlete’s technical support. You have to dial their equipment and also make good decisions based on different variables.
Sheet: Such as temperature?
Nault: That’s part of it. You also have to have knowledge of the equipment’s construction and base material. Some athletes will have their equipment tuned 10 times before they hit the snow. It’s hard work.
Sheet: What’s your schedule going to be like at the Olympics?
Nault: Well, I’m not quite sure yet. But I’ll probably be up at 5:30 a.m. waxing and scraping boards, out on the hill testing equipment and supporting the athletes at events, then be back in bed by 12:30 a.m.
Sheet: It doesn’t sound like there’s much room for pounding drinks with Bode Miller?
Nault: I don’t think I could hang with that guy anyway. But I could try.
Sheet: If you do try I want to hear about it. On that note, will you be Twittering back to Mammoth while your there?
Nault: Yeah, Swix actually wants me, too. So, I’ll be doing that and updating Facebook quite a bit. I try to keep that stuff professional and not tweet about what sandwich I just ate.
Sheet: I agree, but I think it might be important to tweet about a really awesome sandwich.
(Nault then checks his Blackberry)
Nault: Huh, looks like I might be going to Switzerland for the World Cup.
Sheet: Is that how it works? They just hit you up on the Bat-phone and you’re off?
Nault: No, I usually get more forewarning than that. But last year the U.S. Snowboard team gave me 2 weeks notice to head Spain with them. That was a little hectic.
Sheet: Question. Is it tough for you to come back to P3 and tune skis and boards for regular idiots like myself?
Nault: Oh man, the hardest part is going from equipment that I tune on a regular basis to working on someone’s board that is full of core shots. It’s kind of like a car enthusiast looking at a nice ride with a big dent in it. It can be frustrating. But I enjoy working at P3, we have the best equipment and the staff all shares the same enthusiasm for skiing and snowboarding. We’re all perfectionists around here.
You can follow Kenny Nault’s Olympic antics at Twitter.com/Swix_Freeride. Or find him for a quality ski/board tune at P3 located on 3225 Main St. next to Base Camp.