Randonee racer Jon Crowley ascending the final portion of Corbet’s Couloir. A ladder is affixed to the cornice to make it easier to climb over. (Photos: Joe Magajna)

Don’t be intimidated by the name, randonee racing is simply ski mountaineering, or backcountry racing on slender skis. Don’t believe it? Well then just ask Michela Adrian and Jon Crowley, two young athletes in Mammoth willing to supply the enthusiasm if you’ll come try the sport.

Adrian, a Mammoth Mountain Ski Patroller, recently finished third at the US Ski Mountaineering National Championships in Jackson Hole, Wyoming on March 20, missing World Championship qualification by just one place but exceeding her own expectations by a long shot. The first and second place winners in races throughout the year qualify for Worlds. 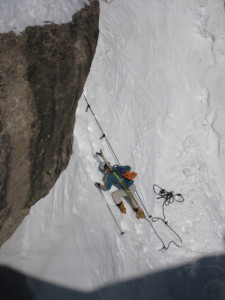 Michela Adrian climbing up Corbet's Couloir. Ropes were installed below the ladder on the final section because it was so steep.

Adrian got her start in the unique sport four years ago at the randonee race series at June Mountain, which has since been discontinued because of lack of interest and therefore lack of funding. Shortly after her first attempt she moved to Santa Barbara for school. She returned to Mammoth last year and started training with a buddy she had met at that original June Mountain race. That buddy is Crowley, a ski mountaineer who has his heart set on going to the World Championships and is completely dedicating himself to the sport in order to do so. Crowley is the local guru for ski mountaineering and Adrian credits his training techniques for helping her do as well as she did at nationals. Crowley finished 20th overall.

Ski patrolling is a common link between the two, but while Crowley has given up the job because it takes too much energy away from his training, Adrian has continued. She sees patrolling as a type of training, plus is still figuring out the level of dedication she wants to give to this vein of backcountry racing (although her third place finish is definitely pushing her toward a higher level of commitment).

Italy has the largest talent pool of ski mountaineers according to Crowley. By comparison, Crowley explained that the number three ranked woman in Italy would be a fully sponsored athlete.

“She would be on T.V. and would be a household name,” he said, as Adrian giggled about her comparative lack of fame.

So what is this sport with the funny name? According to Adrian and Crowley, skiers skin up a course, typically gaining 4,000 to 6,000 vertical feet. There is almost always a boot-pack section on the way up where your skis must be on your backpack as you boot up the designated area. In Jackson Hole, the boot pack area required a ladder to be used in one section not only because it was so steep but also because of the cornice of snow that would otherwise have required racers to swim through the snow rather than boot through it. Once at the top, skiers remove their skins and ski back down. The one to cross the finish line first is the winner.

“The skis ask you to work harder [than typical, fatter, backcountry skis],” Crowley said. “But when a ski doesn’t challenge you, something is missing.”

The uphill trek is where the lighter gear really makes the difference. The setup may be expensive, with the skis alone running between $600-$1800, but once you are able to get the weight issue worked out you can really focus on the strength and skill aspect of the race. Typically ski mountaineering setups weigh 3 pounds, with specialty bindings tipping the scale at only 3 ounces. A typical alpine setup weighs 10-12 pounds.

Gear aside, Adrian and Crowley have the common goal of expanding this sport in the Eastern Sierra, and encourage people to try it even if they don’t have race-specific equipment.

“As much as I like hanging out with Jon for 10 hours in the backcountry it would be nice to have other people come along with us,” Adrian teased.

Seriously though, the two have already started putting together the Eastside Ski Running Club. They hope to have it up and operating by the beginning of the 2010/11 winter season.

“We would love to be able to work with Mammoth Mountain to have some evening training events,” Crowley explained. One of the ideas he has would be to have dedicated uphill ski runs during very specific hours, similar to what they do in Europe.

“The mid-chalets in Europe often serve twice as many uphill skiers as they do skiers riding the chairlifts,” Crowley said.

The club will put on one annual race and the pair has their sights set on the Sherwins. Crowley claimed that the Forest Service is interested and a tentative time frame of the first weekend in February 2011 has been tossed around for an inaugural race.

To find out more about the Eastside Ski Running Club contact Crowley at Jon@mammothgear.com or call him at Mammoth Mountaineering Supply at 1.888.395.3951