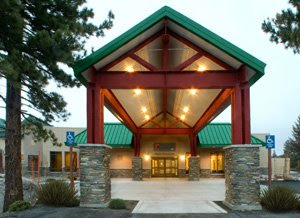 20 employees represents an approximate 6.2% staff reduction.
Boyd acknowledged that Mammoth Hospital expects to show a $2 million operating loss for fiscal year 2008-2009.
Salary and benefits for the average hospital employee add up to close to $100,000/year.
The Hospital is still receiving applications for a voluntary separation program. As of Thursday morning, Boyd said more than 15 applications have been received.
Not all voluntary applications will be accepted, however. For example, the hospital may not accept a voluntary resignation from an employee who occupies a key position – a position whose duties would have to be contracted out, for example, or a position they’d have to fill with another hire.
“As long as we get a good cross-section of employees, a reduction [of 20 FTEEs] should be enough,” said Boyd, but the number could end up at 22 or 23.
Boyd and the Southern Mono Hospital Board confronted a packed conference room full of concerned employees on Wednesday morning. Longtime nurse Margy Klammer spoke for many of her colleagues when she questioned whether cutting staff at the “point of service” would adversely affect patient care.
She said many staff members have signed a “statement of concern” in response.
Many employees also wondered what the incentive was in signing up for voluntary separation, as the benefits for voluntary vs. involuntary separation were exactly the same (two weeks severance pay for every year worked up to a six-month maximum.
It was pointed out voluntary separation would deny an employee the right to apply for unemployment.
Boyd assured employees that the hospital would not contest any unemployment claim in such circumstances.
One thing that everyone seems to agree on is that the hospital is overstaffed. Not one of four employees The Sheet spoke with after the meeting disagreed with that assessment. The issue, therefore, lies in allocation.
Employees believe the hospital is “top-heavy,” and Laurie Bates questioned why Mammoth Hospital has four senior managers while Northern Inyo Hospital in Bishop gets by with just two.
Hospital employee Rob Valentine, who was placed on administrative leave following a critical email disseminated throughout the hospital, summarized his position in a letter mailed to The Sheet this week.
“It can be concluded that a clinical assistant such as myself is the cost enemy at Mammoth Hospital …
Pointing the finger at folks like myself, and then having the audacity to not only drag out the cost-cutting exercises but to, in the same breath, offer a “success sharing” program, is all part of the madness. This “success sharing” program, and the staff cuts, seem to be partly or largely managed by [Chief Operating Officer] Joe Bottom. He is one of the main reasons Mammoth Hospital is in this mess.
Of course we are overstaffed; but you don’t simply cut across the board and allow non-productive people to hang around. It’s offensive to hard workers. Of course we may have to cut even productive workers; a solid plan detailing why and how is what senior managers are paid to do; they have failed the community many times in this area.”
(A transcript of this letter can be found in the LETTERS section at right.)

The hospital’s strategy looking forward appears to be twofold.
One prong is volume. The hospital, according to one employee, charges about 80% of what Northern Inyo charges for primary care, so there is an argument to be made on price.
The second prong is services, and Boyd outlined several services in a Thursday phone interview that the hospital is adding to its repertoire (including a histology department) to generate revenue.
Still, one couldn’t help but feel a sense of irony when an employee’s cellphone inadvertently went off during the tense board meeting Wednesday. The ring tone: “I Hate Myself For Loving You,” by Joan Jett.