Tuesday night’s Candidates Forum allowed the eight individuals running for the three available seats on Town Council this June 8 to let the public know where they stand on important issues facing the Town of Mammoth Lakes. For three grueling hours candidates were asked to answer questions about Measure U, the Town’s budget and the Town Manager, among others, in one minute or less.

Technology, social networking and the internet are playing a big role in this year’s election process. More than half of the candidates have set up websites and Facebook pages in order to reach out to the community. The Forum itself was not only being broadcast on television, but was also being streamed live on the Town’s  web site. During the Forum home viewers were allowed to call in questions or send them by e-mail. 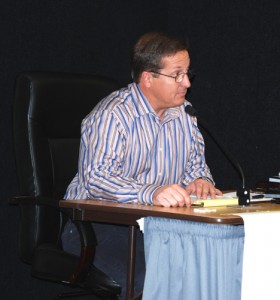 Moderator Tom Cage led the candidates through the gauntlet, keeping them on task and on time. To read how the candidates responded to the various questions, pick up a copy of this week’s print version of The Sheet.