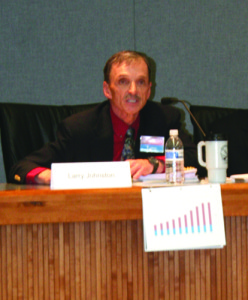 Larry and his charts

This is why I could never run for office.

And at each one, trying to pretend you care about every person you meet and every issue that’s raised.

That’s exactly what your Mono County candidates for Judge and Sheriff have had to endure since last week, with forums at Walker, Bridgeport, the Bridgeport Indian Colony, June Lake, Lee Vining and Mammoth Lakes.

The Mammoth forum, held Tuesday evening in Suite Z and moderated effectively and efficiently by Jack Copeland, was somewhat unique in that it gave voters the chance to weigh the merits of District 1 Supervisor candidates Bill Sauser and Larry Johnston.

Now I’m used to seeing Sauser at Mammoth Lakes Tourism and Recreation Commission meetings, a commission he now chairs (he has been a member of the Parks and Recreation and now Tourism and Recreation commissions for the past 13 years). In that realm, Sauser has developed a comfort zone. He knows the issues. He’s opinionated. He’s smart. He’s funny. He’s a big man with a big voice. If you had to come up with a campaign slogan for Mr. Sauser, it might be “Common sense for the common man.”

But the formal setting of the candidates’ forum appeared to prove somewhat unsettling for Sauser. He’s used to the freewheeling nature of commission meetings. And he’s used to having absolute command of his material. As Sauser acknowledged in his closing statement, “Maybe I don’t know the County issues as well as I should, but that gives me a fresh set of eyes [to look at things].”

Sauser has been a Mammoth resident for 52 of his 58 years and is a longtime Chairman of the Southern Mono Historical Society. Perennially active in civic affairs, he says, “This is a next step for me.”

Sauser is opposed by Larry Johnston, who has, quite simply, demonstrated an unparalleled work ethic and dedication to his campaign. He has, by far, outworked any other candidate for office in Mono County. I’ve seen Johnston spend entire weekends at Vons standing behind a card table handing out literature and talking up voters. He’s been a regular at Town and County meetings of every description and I even saw him last week in the audience at the candidates’ forum in Walker.

Johnston, who has worked in the County planning department for the past decade, is more of a technocrat, and I don’t say this derogatorily. The running joke at the forum were the many charts that Johnston had brought along to illustrate various points. He had command of his material. And unlike most technocrats, Johnston has actually walked the neighborhoods and knocked on the doors.

Johnston feels it is important to give some support to the local construction trade and views unemployment as the number one issue for the district.

Sauser replied that the lull in construction isn’t just about building fees. It’s also tied to the difficulty people are having in obtaining loans.

In addition, Sauser said our focus should be more on sustainable industry (tourism) as opposed to a cyclical industry like construction.

In the Judges’ race, the most interesting moment came about when Copeland asked a question about judicial discretion stemming from a recent local case involving a sex offender where the District Attorney had asked for a maximum sentence, which Judge Forstenzer did not grant.

“It is important that the judiciary is independent of the executive [District Attorney]. I would [as a D.A.] never have gone to the Judge or the press about a decision that went against me … a Judge has to have the courage to stand up to an ill-conceived will of the people who don’t have all the facts.”

Therese Hankel scored points by talking about how she is truly the only independent candidate, because her advertisements are not loaded with endorsements. She questions how independent a judge can be if a campaign supporter comes before him/her in court.

She is also the only candidate who’s actually worked within the judiciary, having prior experience clerking for a judge.

She also told a great story about bragging to her elementary school classmates about her father climbing Mt. Kilimanjaro.

Her teacher promptly sent her to the principal’s office for lying.

Hankel returned to school the next day with one of her father’s summit photos.

Lesson: Never judge unless you’ve heard both sides and have all the facts.

In regard to endorsements, he said these are the people who best know his temperament and how he’d perform as a judge and are therefore key people to speak to in order to gain a measure of the man.

In his closing statement, Gephart trumpeted his endorsement from District Attorney George Booth. “Some of my biggest supporters are in the D.A.’s office … and I’ve been opposing them for 22 years.”

As opposed to the last candidate forum I attended, where no questions were directed at Sheriff Rick Scholl and challenger Doug Northington, Copeland drew them out at this forum.

The biggest difference between the candidates, it appeared, was their approach.

Scholl trumpets “community-oriented policing.” He says “traffic enforcement is not a primary function of the Mono County Sheriff’s Dept.”

“I want my guys off 395 and in the communities,” he said in a follow-up interview Wednesday.

As he said at the forum, he advocates traffic stops as a law enforcement tool. Stop people for lawful violations, and then pursue evidentiary stuff if it presents itself, he said.

He opined that people should feel a little more nervous when they see a Sheriff’s Dept. vehicle behind them.

“Fear of police is the wrong thing to do,” says Scholl. “We’re here to help. I don’t want the public’s blood pressure racing every time they see a Sheriff’s Deputy.”

In an interview with Sheet journalist Andy Geisel, which will appear in its entirety next week, Northington did clarify the above comment.

“The power of the law is in the enforcement of it. In order to be motivated to follow the law, you have to have a certain fear of what happens if you break it,” he explained. “You should know they are there. It can make you feel more secure, but if you’re stepping over the line, it should remind you that they’re doing a job.” Each contact, he said, is an educational opportunity … for the deputy as well as the citizen.

One thing both candidates could agree on is that inmates shouldn’t be coddled and should be used as a labor force for various public works as needed.