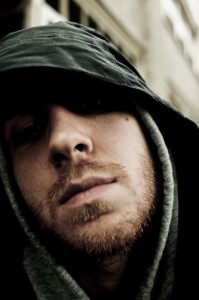 Sapient in his Jedi cloak (Photo by Kit Crenshaw)

I know exactly what you’re thinking. It’s summer, and in Mammoth Lakes when the warm weather rolls around it seems like there’s nothing to do but listen to Phish cover bands and eat fish tacos. Thank God for The Tap. Last Friday, Portland-based rapper/producer Sapient of the crew The Sandpeople, performed live with ex-Mammoth local and Gray Matters member DJ Nykon. Since I love to discuss the hip hop arts, I caught up with Sapient last Thursday.

So what’s with your name, Sapient? I know it means to be wise or thoughtful. You’re young and talented, are you like the Doogie Howser of rap?

Yes, I am precisely like Doogie Howser. Except Doogie Howser had an unusually huge noggin. I like to think of my head as proportionally beautiful.

You have a song called Stay Connected that talks about the importance of technology in your life. Being an “indie” artist, do you feel that you need to constantly have an online presence?

Yes, definitely. That song was from my 2008 album, “Letterhead,” which marked the beginning of my stepping up as a solo artist. As the commercial music industry continues to crumble, the internet really has become a savior to the DIY musician. The social networks and unveiling of the artists and businessmen as humans has exposed all the scandalous ways that the majors used to prey, and has cut out the need for a huge expensive machine to promote your music. My peers and I always assumed that being on a label roster was what our careers would eventually lead to, but now we’re here doin’ things ourselves, and a “self-released” album doesn’t hold the embarrassing stigma it used to. If you’re doin’ things right.

On your website you have a lot of free downloads. Is this a new reality with musicians? It seems like giving away music is part of the business so to speak.

Well music has been basically made free by the ease of pirating and free/cheap streaming sites, so I try to combat that by not pretending. I keep my standard of my own music so high that it has created faith in my fans. Consistency is one of my strengths. Giving away music is really a great way to give back to my fans, and is a way to compound the stress the major labels have been feeling. They spend millions on recording costs, mixing, mastering, producers, album art etc. I do all of these things myself, so I can create records better than their “shiny” hit seekers… for free!
Does this result in more tour dates?

Yeah it does. I’m really trying to drop two more albums this year, one hip hop and one rock. Then take a break from the ultra creative mode and tour for a year. I feel now that my discography is pretty hefty.  I need to work on bringing it to new listeners, in person.

You’re in a crew called the Sandpeople out of Portland. Didn’t Obi Wan say,“Sand people are easily startled, but they’ll return and in greater numbers.” Please tell me the name is a “Star Wars” reference.

Okay, don’t take this the wrong way but I never understood the need of forming these huge rap crews. In terms of history, it seemed like the bigger Wu-Tang got, the more the name became watered down. It must be a business move. Does it make sense financially?

No it doesn’t make any sense financially. In theory it might, in some ways, but really that sh*t doesn’t end up translating to real life. We really are just a huge rap crew because we enjoy making music together. With what we’ve built behind our name, it would be a shame to stop now.

I once read this interview with RJD2, and he said he hated working with most rappers because it always results in them screwing up his beats. You’ve worked with a lot of people I enjoy listening to (Grouch, Cage, Eydea, Josh Martinez, Luckyiam). Being a producer is it sometimes difficult to collaborate with rappers?

Yeah, as a producer it is annoying sometimes. RJD2 usually only works with garbage rappers though, haha. Except Cage and Copywrite. But yeah, I really only started making beats so I would have some to rap on, then I focused and really developed a love for it. Around 2007, I was starting to be more renown for my beats, so I had to slow down on the production, and make some more solo albums. My producer career with outside artists is usually a means to make a living and keep doing what I do without falling victim to that 9 to 5 venom. I have a wife and baby daughter that I am the sole provider for. I work harder than anyone I’ve met. Rappers are usually the lazy dregs of the earth. *sarcastic serious smile*

I feel like one of the appealing things with hip hop is its spontaneity. The rapper J.U.I.C.E once said that if you can’t battle rap you’re not really rapping. Do you think there‘s any truth to that?

Ha ha, maybe. I feel like battle rapping isn’t really the same thing as making music, though. Especially nowadays where they “street battle” acapella style. It sounds like they’re just yellin’ at each other. It’s more like standup comedy that rhymes.

That’s why I figure if anyone tries to battle me I’ll just hit em with a “yo mamma” joke and try to make it rhyme to something. You can’t go wrong with that.

Alright, I look forward to seeing you up here.

Yeah, lookin’ forward to it as well my man! We’re out here basically rappin’ for change. Ha-ha! Bring some friends that wanna buy shirts.

For more on info on Sapient and some free downloads check out his website www.sapientkills.com.