On Sunday, Aug. 29, a crew of Volcom professional skaterboarders spent the day at the Volcom Brothers Skatepark in Mammoth Lakes. The 13 riders were there for several reasons including filming an episode for Fuel TV, doing a photo shoot for Thrasher Magazine, and enjoying a skate session at the end of their Volcom Brand Jeans Tour 2010.

“We had to call it a skate session because the skatepark is too hard for a demo,” Volcom’s Steve Stratton told The Sheet. The tour began on Aug. 14 and visited cities all of over the country including Northbrook, Ill. and Seattle, Wash. Among the riders who showed up in Mammoth was recent winner of the X-Games’ Skateboard Park event, Pedro Barros.

The session arrived on the heels of Wave Rave’s annual skate competition that took place on Saturday and received a large turnout of local riders in the park. 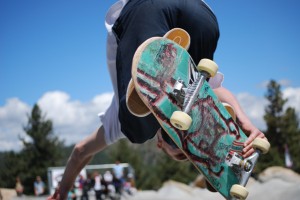