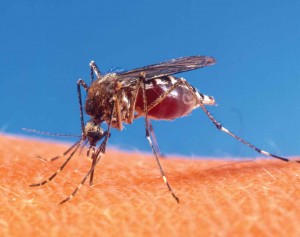 Culex, one of the 3,500-member family Culicidae, and a carrier of the West Nile Virus. (Photo: Wikipedia)

(The following is a reproduction of a story by Dr. Dostrow that appeared in our July 4 edition in 2009. We are including it here to archive it on the new website, and as a courtesy to our readers, since the Doc references this article in his new story, “Ticked Off,” which will appear in this weekend’s edition of The Sheet and online here at www.thesheetnews.com.)

Finally, a well deserved break from this unusually inclement weather. To be certain, the Eastern Sierra needs moisture and the flowers are going to be spectacular. However, with this mixed blessing comes another bloom: incessant, merciless blood-sucking hordes of mosquitoes.

Most of us around here have accepted a few bug bites as part of the price to pay for world-class scenery and panoramic views. This summer though, I fear, may be more mosquito-intensive than recent years.

Mosquitoes can not only be a major annoyance, but also pose a risk for disease. Although malaria, yellow fever and dengue fever are no longer dangers in North America, we should be aware of other mosquito-borne maladies that can cause significant illness and even death.

Mosquitoes carry a variety of diseases, some of which can result in encephalitis (swelling of the brain), but the most common in our area is West Nile Virus.

According to the Center for Disease Control (CDC), in 2006 there were 3,800 infections and 119 deaths caused by West Nile Virus. One out of 150 people bit by an infected mosquito will contract the virus. Of these, 80% will not show any symptoms. However, the other 20% may show symptoms such as fever, fatigue and muscle aches, usually leading people to think they have contracted the common flu. In rare instances, the infection can spread to the central nervous system, producing headaches, a stiff neck, tremors, convulsions, coma and sometimes death. Obviously, if any of these symptoms occur, consult a medical professional a.s.a.p., unless, of course, you’re dead.

Before we discuss prevention of bites, first a few freaky mosquito factoids:

Only females bite, and they feed every three to four days in order to nourish their eggs. Thus, it is unlikely to fall victim to the same female twice (if only our species were so kind!).

The most potent attractant for mosquitoes is carbon dioxide exhaled from the lungs and secreted by skin. They’re also attracted to lactic acid and heat. So stay cool, breathe easy and sweat less.

Mosquitoes escape from the daytime heat in cool, dark places such as trees, bushes and tall grasses. These are often desirable camping spots, so keep the trade-off in mind. Remember, dawn and dusk are prime feeding times for blood suckers to seek shelter.

To minimize the number of bites this summer, here are some tips for mosquito control:

The most effective and time-tested insect repellent is N,N-diethyl-meta-toluamide, a.k.a. DEET. Invented in 1959 for military use, this popular product is available in a variety of formulations with concentrations from 5% to 100%. Although considerable debate over toxicity of DEET exists, the CDC and the FDA insist it has a relatively low risk for serious reactions. Uncommon reactions can include rash, headache and nausea and are usually associated with prolonged use.

Picaridin is another repellent recently approved by the CDC for topical use. Unlike DEET, picaridin is odorless, non-greasy, and does not destroy Gore-tex, plastic and every other material in your backpack. Studies indicate that more frequent applications may be required.

Citronella and other citrus-derived repellants smell great but are significantly less effective than their more chemical counterparts. No matter which repellent you use, it is not necessary to re-apply until the winged warriors attack again.

Permethrin is derived from the chrysanthemum plant family and is

effective for treating clothing, tents and head nets. Some synthetic fabrics may be affected, so consult product warnings to be safe. Permethrin can induce severe skin reactions and is not recommended for topical use.

Loose fitting, light-colored, long- sleeved clothing treated with permethrin is optimal. A wide-brimmed hat with a treated head net can help decrease facial and neck bites as well as that incessant buzzing around the ears, which can drive a person to the brink of insanity.

Scented soaps, lotions and perfumes can be a powerful attractant, so leave the Old Spice at home.

As summer rears its long-awaited head, so do the unending masses of parasitic vermin. Perhaps these recommendations will help maximize enjoyment and minimize blood loss. Remember: repellent, clothing, location and time. Keep these in mind and you should fare well if caught in a feeding frenzy.

For everything you ever wanted to know about mosquitoes but were afraid to ask, go to www.mosquito.org.