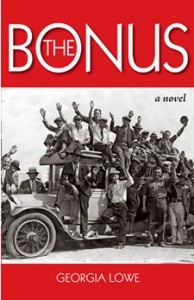 In the genre of “historical fiction,” it’s not unusual for novelists to set their stories during climactic or otherwise well known events. Margaret Mitchell’s “Gone With The Wind” takes place during the U.S. Civil War,  James Michener’s “Space” at the height of America’s race with the Russians.

Eastern Sierra local and first-time novelist Georgia Lowe set hers during a more obscure, though quite dramatic event: the Bonus March that was staged during the depths of the Great Depression.

The story, which starts in February 1929, is mostly set during the spring and summer of 1932. A confrontation is brewing between the U.S. government and the Bonus Expeditionary Force (or Bonus Army), made up of 43,000 marchers, including 17,000 World War I veterans, their families and affiliated groups, who protested in Washington, D.C., vowing to stay on the Capitol steps until 1945 if necessary.

The war veterans, many of whom had been out of work since the Depression began, sought immediate cash payment of Service Certificates granted to them eight years earlier via the Adjusted Service Certificate Law of 1924. The problem was that the certificates matured 20 years from the date of original issuance, and by law could not be redeemed until 1945.

Lowe, who grew up in Los Angeles — and from the descriptions she uses, has meticulously recreated Hollywood as it was in those days — made a smart decision, using her own parents’ experiences as actual Bonus Marchers to lay the foundation for the book.

The fictional characters of Will Hardy, an L.A. newspaper reporter, and Bonnie, a young movie actress, are based on her parents, Don and Bernice Hardy (she even kept the last name). The personal drama between them is intermixed with some fictionalized interpretations of real-life persons who were part of the major events of Bonus March. One key player: Royal Robertson, one of the more forgotten, but certainly heroic faces of the Bonus Army.

Lowe’s novel takes readers along with Will and Bonnie from Tinseltown to the nation’s capitol, and it’s from their point of view that we get an inside look at the events that led to a horrible, tragic attack by U.S. Army troops on their own veterans.

The novel zips by with snappy dialogue and short slices of life. Succinct chapters are marked by the passing of the months. No long, tedious paragraphs or clunky chunks of exposition. “The Bonus” has business to do and wastes little time getting to it.

With one-quarter of the country out of work, families losing homes and businesses failing, and dust storms ravaging the Great Plains, can the Bonus Army vets survive another war, one fought on their own country’s soil? What of Will and Bonnie, who just found each other in the midst of chaos?

Lowe’s first effort, 10 years in the writing, shows she’s done her homework. Her passion for her subject matter isn’t hard to get. She’s true to her characters and to the Bonus March, one of our nation’s most emotional, touching, bittersweet events. “The Bonus” is primarily about people, but its story also effectively uses actual history to establish links from what’s happening in the country today to our past, a past which, if we aren’t careful, we may be condemned to repeat.

“The Bonus” is avaiable at the Booky Joint and Spellbinder books in Bishop.