Mike Leisniak walked away with the title of Taco King last Tuesday at the Auld Dubliner’s taco-eating contest. (Photos: Wolf)

In a summer littered with memorable “bar-tivities” such as Jell-O wresting and wet T-shirt contests, it’s only fitting to throw in an eating contest. Last Tuesday was a glutton bowl as the Auld Dubliner celebrated the one year anniversary of its unexpected yet wildly successful Taco Tuesday night with a taco eating contest.

It was a tense atmosphere as 18 contestants (split into two groups and two rounds) raced to finish 10 tacos. This would have been an easy feat, except for the fact the tacos were laced with Ghost Peppers (whispered to be farmed by inmates at a Mexican insane asylum) giving the tacos a rating on the spice-o-meter a balmy 10 alarms (aka you‘ll sweat Tapatio sauce for a week).

In fact, in order to compete in the contest individuals had to sign a waiver written by kitchen manager/ taco artist John Kovatch stating, “You agree that you are a complete idiot, no one of sound mind would enter this contest.”

Bar manager Chris Camilli manned the megaphone and kept the crowd amped, however the most entertaining part of the evening was after the second round when Casey Rackowski projectile vomited into a bucket for a solid 3 minutes as local heckler Jac Barret dosed him with water (see photos).

“Damn that boy can eat, ” said one bystander referring to the overall winner of the night, Mike Leisniak who walked away (very slowly) with a $100 after completing  his 10 tens in 3:06. 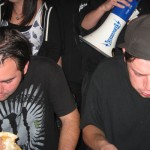 Side by side taco misery 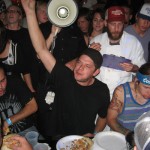 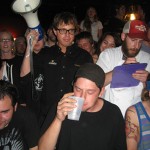 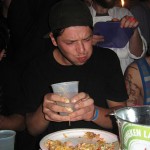 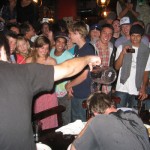 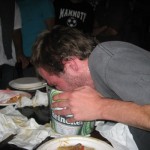 ?? vomited after round two 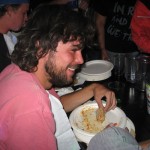 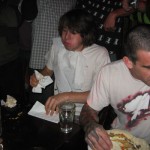 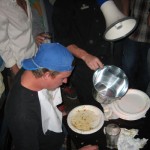 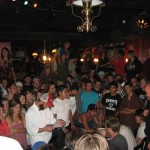 Packed house at the Auld Dubliner for the taco-eating contest 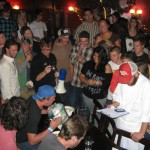