Mammoth’s bears are still awake and active. A fact that was apparent during a break in on Friday at Cabin #25 in the Lake Mary Tract in the Lakes Basin. Steve Searles was on scene, but with his hands tied on Forest Service land could only look at the mess in disgust rather than determine how he was going to reprimand the bear.

The bear was so gluttonous, it bit through the metal of canned goods on the premises. It was also determined enough to get past some booby traps the owners had left behind. According to Searles the cabin had already been broken into six times. 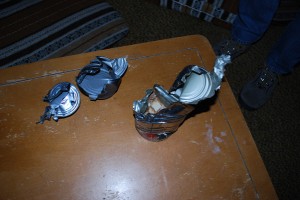 These cans were chomped through by the burglarizing bear

The booby traps were wood boards with nails sticking up through them that were placed at all entrances around the house. The bear easily navigated the trap to get through the kitchen door after gnawing its way through the doorknob.

Cabin 25 is just a few feet away from where a bear, thought to be the infamous Blondie, was put down this summer by Mammoth Lakes Police Sergeant Karen Smart. 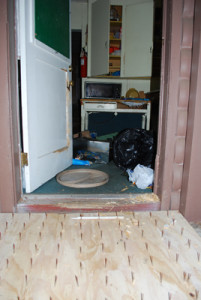