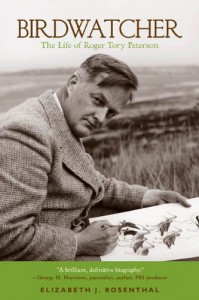 I love birds, but — full disclosure — I’m not a birdwatcher. What I know about ornithology you could fit in a birdfeeder. I do know, however, that in the world of birdwatching, or “birding” as it’s more commonly known, two persons qualify as the undisputed founding fathers.

One is obvious: John James Audubon (1785-1851), the French-American naturalist, ornithologist, hunter and painter, who catalogued, described and depicted North American bird species in a manner far superior to anything that had been done before.

The second has to be Roger Tory Peterson, whose amazing life and work is the subject of “Birdwatcher,” Elizabeth Rosenthal’s very detailed and yet very personal biography.

Her second book, Rosenthal’s riveting, revelatory read about the father of modern American birding, should be considered essential reading not only by birding devotees, many of whom probably have some Peterson books in their collection, but also by anyone who just loves to read about fascinating historical figures.

Peterson, as did Audubon in his day, revolutionized birding, inventing the modern bird guide. Born in 1908, the same year President Theodore Roosevelt invited members of the Audubon Society to the White House to watch the first motion pictures of birds, Peterson was the anxious, rebellious son of working class immigrants.

According to Rosenthal, Peterson was captivated as a youth by a woodpecker sleeping on a tree trunk that seemingly “burst to life” upon being touched. It is that single event, maintains Rosenthal, that is the touchstone for Peterson’s self-taught, homegrown evolution into one of the most important naturalist/scientist of the last 100 years.

From there, his story really soars. A teenage transplant from upstate Jamestown to New York City, he worked his way through art school, and palled around with a group of local boys — the Bronx County Bird Club — who were similarly into birds.

At just 22, in 1934 he conceptualized, and single-handedly authored and illustrated, the first practical (and portable) field guide to birds in world history. His landmark “Guide to the Birds,” was the first guidebook designed to be taken outdoors and help people identify the elements of nature. An instant smash hit, “Birds” sold out its first printing of 2‚000 copies in a single week, and immediately generated six additional printings.

Rosenthal, herself an avid birder, tapped into her passion when it came to writing about Peterson. She may blush a bit at the comparison, but her storytelling style isn’t unlike that of fellow biographer David McCullough. As if modeling her book using Peterson’s own methods, she opts to break down the story and examine the self-proclaimed “student of nature” via his “several lifetimes” as field guide author, painter, photographer and filmmaker, natural history teacher, scientist, conservationist and mentor. She exhibits a knack for place, time and flow; the book’s six-part, 19-chapter structure follows Peterson’s remarkable life from “Fledgling” to “Bird Man of Bird Men.”

Whether he was at his desk or in the field, Peterson was on the cutting edge of the modern conservation movement. This was true not only in the U.S., but also in far off locations, such as Spain, Africa, Midway Island and the most pristine (and remote) place on Earth: Antarctica, where he brought to light the need for real studies of the indigenous bird population there. This earned him perhaps his most prized nickname, King Penguin.

Rosenthal balances his fame and notoriety against the realities of both life with and being Roger Tory Peterson. As are many geniuses, Peterson was complex, and Rosenthal did her legwork, collecting more than 100 interviews to develop what is without question a definitive portrait. Included are observations from friends, colleagues, peers, members of Peterson’s family, and fellow pioneers such as Keith Shackleton, who hailed Peterson’s 1954 European bird guides as “the absolute bible.” Others consulted included Kenn Kaufman, author of “The Kaufman Field Guide to Birds of North America,” naturalist sculptor Kent Ullberg, and PBS journalist and producer George H. Harrison.

Peterson was the most sought-after ornithologist and conservationist of his time. Brilliant as he was at the art and science of birding and conservation, Rosenthal doesn’t shy away from the toll his career took on his family life, including three marriages.

Interesting facets of Peterson’s life include his fascination with and mastery of the camera, amassing a catalogue of roughly one million photographs of birds from all over the world. And I also found his perfectionism a curious part of his character. On the day he died, July 28, 1996, one month shy of his 88th birthday, he was in the middle of revising his Field Guide to the Birds of Eastern and Central North America for the fourth time. (It was finally published posthumously in 2002.)

You don’t have to know beans about birds to reap the rewards in “Birdwatcher.” It’s a marvelous account of Peterson, a historical giant who forever (and for better) changed the way we look at and document our world, and a book that should appeal to the historian and indeed the naturalist in all of us.

Order a copy from the Booky Joint in Mammoth or Spellbinder Books in Bishop.