Four years ago, Eastern Sierra local Rochelle Hair wouldn’t have been anyone’s choice for the swimming leg of a relay team. Seeing as how she couldn’t swim, not only would the team’s chances be in jeopardy, so would Hair’s life.

In this year’s June Lake Triathlon, however, Hair will fill out a relay team with Nancy Fiddler and Joe Walker as the swimmer of the group.

“Nancy will be running and Joe will be biking … I just hope I can fit in my wetsuit,” Hair joked.

A collegiate runner at the University of Nevada-Reno, 15 years later Hair decided she wanted to challenge herself in a new way and set her sights on becoming a professional triathlete.

“I hadn’t done anything competitive in about 15 years and I didn’t choose to run again because I didn’t want to be comparing myself to my college times,” she explained. “I wanted a new challenge.”

That challenge was, “could a 35-year-old come back in a new sport and be a pro?” It wasn’t without obstacles, foremost not knowing how to swim. Hair could tread water and move herself about, but when it came to swimming technique, she had none.

“The first time I was in the Snowcreek pool it took me 45 seconds to go one length,” she said (the Snowcreek pool is short by swimming standards). In her first competition at the Berkeley Bearathlon, she got out of the pool with one second to spare The competition had a time limit for each segment of the triathlon.

Following that competition in February 2008, Hair went to Reno for swim lessons. By June 2008 she competed in her first, real open-water triathlon at the Ironman 70.3 (total mileage in the race), in Boise, which included 1.24 miles of swimming. She placed 13th overall, including the pros. In 2009 she won the long-distance amateur championships by eight minutes. That same year she qualified for the pros.

But it wasn’t a complete cakewalk.

The night before her first pro race, Hair’s bike was stolen, forcing her to sit on the sidelines. The bike was fit perfectly to her body and her ability. It couldn’t be easily replaced and was a devastating blow, but Hair pressed on and participated in her first pro race in 2010 … again, however, tragedy struck.

“I had breathing problems and placed 22nd when I had expected to be in the top five,” she explained. During the next race her breathing problems progressed and she wasn’t able to the finish the race. To this day, doctors have not been able to diagnose the problem, claiming its not asthma or allergies.

“I really didn’t know how I would do in the 2010 June Lake Triathlon,” Hair said of the race last year where she signed up for the Individual Olympic. 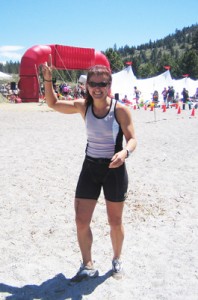 She ended up winning the women’s division by more than 10 minutes.

A self-proclaimed swim geek, Hair remembered a comment that a fellow competitor made to her after that race.

“She told me I looked so non-threatening,” said the 5’1” athlete. “I was wearing my swim cap, goggles and nose plug.”

The win gave her the motivation to continue trying to push through her breathing issues and continue training, but after continued struggles she decided to take last fall off and relax. She focused on the business that she runs with her husband and fellow professional athlete (a cyclist who went to the Olympic Trials in 1992), Bill Ossofsky, Eastern Sierra Tree Service, but by winter she began training again and plans to participate in more races this fall.

As the Eastern Sierra enters into triathlon season (the first is this Saturday, July 2 at Whitmore Pool and is just for kids), it is apparent that the sport is catching on.

“Triathlons are growing,” Hair said. “They used to be considered extreme but are now more like marathons. Something for someone to tick of his or her checklist.”

“We’re in an economic crisis and yet every year we get more participants,” Levin explained. “The July 4 Tri at Whitmore received so many entries that they had to close it off and make it kids only (hence the kids tri this weekend). The sport just continues to grow.”

This year’s June Lake Triathlon had 350 registered entrants at press time and Levin expected that number to rise closer to 400 by Monday, July 4’s registration deadline.

The Eastern Sierra holds great potential for the sport if it can just get organized. Both Hair and Levin felt that a year-round standardized pool (or even just extended hours at the already-existing Whitmore Pool) would be necessary for professional triathletes to come and train in the area (think Whitmore Track for triathletes).

Of course, Levin realistically pointed out that building a better pool is not the only answer.

“It’s not just ‘if you build it they will come,’” she explained.

Not currently a pro race, the June Lake Triathlon would also need a benefactor to provide purse money to push it to the next level.

“Rather than striving to be something we’re not, we need to tap into what we are,” she said.

As a first step, this year’s June Lake Triathlon will be completely solar-powered by Highpoint Solar.

For more on triathlons offered in the Eastern Sierra, check out visitmammoth.com.

For more on the June Lake Triathlon, being held July 9, visit www.highsierratri.org/junelake