It’s been 11 years since Sara and Erynn Lavagnino, aka the Lava Girls said farewell to their Eastern Sierra home, and headed east to Tennessee, in hopes of making it big in country music. The identical twin sisters, who were born in Bishop, and raised in Tom’s Place and Mammoth Lakes, agreed it seems like yesterday that they staged their farewell show, which helped pay their way out of town. “Time’s flown by,” they both exclaimed, but emphasized that if not for their hometown supporters, they never would have made it to Tennessee.

“We love Tennessee and Southern culture, but we do miss our home,” Sara said. “We’re still mountain girls at heart,” Erynn added.

When they arrived in Nashville, the real work began. The girls shared one car and worked three jobs each to get themselves established. And while the road to success has been a long, hard one, they’ve made some great strides.

They’ve been invited to perform at the Country Association’s prestigious Music Fest, and played Nashville’s legendary honky tonk, Tootsie’s Orchid Lounge. Among the greats who’ve cut their teeth on one of the Lounge stages: Willie Nelson, Patsy Cline, Mel Tillis, Kris Kristofferson, Waylon Jennings and Roger Miller. They also were selected to be the finale “finish line” act for Nashville’s Country Music Marathon, playing before a crowd of 30,000.

But on many a Friday night, you’ll find the Lava Girls honing their craft and trying out new material to their growing following at the Hotel Indigo in Nashville.

The Girls have been in Mammoth for the odd one-off gig [they appeared at Rafters earlier this year], but getting home even for family visits is tough. Not surprising … being a Lava Girl means recording, touring, working your day job, more recording, travel … you get the idea. Today, Sara works in sales, while Erynn is a medical assistant for a pediatrician.

With a unique sound that pulls from 1970s rock, old school country and the new crossover trend, the girls actually embrace the country music that all that life experience has been good for them as songwriters. “We grew up listening to anything and everything on KIBS,” Sara recalled. “I’d sing along to Alabama, Trisha Yearwood, Martina McBride, LeAnn Rimes. But our dad [Bob Lavagnino] was really into the Beatles, the Eagles, Crosby Stills Nash and Young, so we’re also really influenced by Stevie Nicks and Fleetwood Mac.”

Cut to present day and the twins have nearly finished recording songs for a new album, hopefully due out in late October or early November, which will include one of the most emotional songs the girls have ever written, “Timmy’s Song,” a tribute to Sara’s late fiancé, Tim George, who passed away this past April following a battle with cancer.

“It is what it is … Live every single day like we were meant to live,” the lyrics say. “It is what it is” was a phrase Tim used a lot in the last five years of his life as he battled skin cancer. “The song’s for people going through rough times; we want everyone to get something from it,” Sara said. “The chorus says we’re only here a short time, and we have to make the most of our time together.”

Tim’s phrase was a key part of how the song came together. “He was really close to the band,” Sara recalled. “Me and Erynn and our fiddle player and guitarist were writing things that Tim would do or say, and the guys in the band remembered that he’d always say, ‘It is what it is. It can’t be changed, so let’s make it the best we can.’”

Sara and Erynn first performed the song in public at Tim’s funeral, which — as happenstance would have it — ended up being the same day as the Country Music Marathon concert.

This Saturday night, the sisters have donated their talents to be the opener for the 6th Annual Franklin 4 the Cure Concert on the Westhaven Clubhouse’s great lawn in Franklin, Tenn. The concert is headlined by no less than country star Suzy Bogguss, who lost her best friend to breast cancer. “Suzy’s funny, but very genuine,” Sara described. “She can really relate, but uses humor to deal with cancer. We just love being with her.” 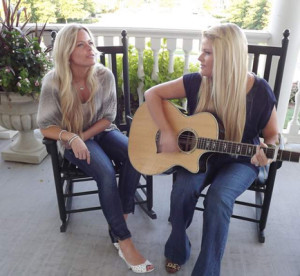 The event is a big fundraiser for cancer research at Vanderbilt’s Monroe Carell Jr. Children’s Hospital. That night both Sara and Erynn’s family and Tim’s family will be in the audience, and the girls plan to introduce them all before they sing “Timmy’s Song.” They also plan to run in the event’s 5k race earlier that day, and will sing the national anthem before the starting gun is fired. “Tim loved this event; we were there last year and saw Heidi Newfield,” Sara said. “I’m going to sing for Tim; he’d have had the time of his life at this show.”

Meanwhile, the girls are always looking to the future, which is more and more starting to come into focus. “It’s been so long, but we’re getting our name out there,” Erynn commented. “People know us, and we’ve sort of made our way into that ‘inner circle.’” They aren’t, however, throwing themselves at any record deal that comes along, preferring to wait for the right label that will put the right kind of money behind promoting them. “We enjoy what we do, so it’s not so much about the deal,” Sara reasoned. “It’ll pan out sooner or later.”

Having each other to lean on and discuss decisions hasn’t hurt any either. “We don’t know any different,” they said. “We’ve always had each other … first day of school, sports … we’re each other’s built in best friend,” Erynn pointed out. “It’s a twin bond; and you can’t break that,” Sara affirmed.

Their new life as country musicians doesn’t leave much time for doing shows back home, but Sara and Erynn said they’re looking forward to playing here the next chance they get. “We’d love to be invited to play Mule Days … hint, hint,” Erynn nudged. “The band is itching to get out there. They want to see where we come from and play in the mountains,” Sara enthused.

Sheet: Any shout out to your family and friends back home?

Lava Girls: Absolutely! Hi, Eastern Sierra! We wouldn’t be here without our family and friends; you’ve all been so supportive and we love you all!