Tim Alpers hopes the County and granting agencies can determine what can and cannot be done at Conway Ranch so that he can continue to supply fish to the Eastern Sierra. (Photos: Kirkner)

Still no resolution for Conway Ranch

If ever there was a case of too many cooks in the kitchen, consider the situation at Conway Ranch.

In May, The Sheet reported that Caltrans had identified alleged grant violations at Conway Ranch (https://thesheetnews.com/archives/8786). Caltrans supplied one of several grants to Mono County more than a decade ago as the County began purchasing land parcels on and around Conway Ranch. Since 2007, the Ranch has housed Tim Alpers’ modest fish farm. Alpers has made small modifications to the Ranch over the years, and in 2010 requested that he be allowed to build a small barn facility that would house a fish incubation operation and a small visitor center.  The County told him to contact the granting agencies before proceeding because a permanent facility is not allowed under the grant.

Alpers contacted Caltrans first and a representative made a site visit in June 2010. Before even discussing the barn, the representative pointed out several, alleged violations, including a handicap ramp that makes fishing accessible to those in wheelchairs, and disruption of the view from Conway Summit. Things have been on hold for Alpers ever since.

“We want to build a 50-year hatchery,” Alpers told The Sheet last week on a tour of the Conway Ranch facility. “To complete it we need incubation. Currently, 90 percent of the new fish are bought in Oregon. It’s expensive.”

Plus, bringing fish in to the Ranch violates another agreement, this time with the State Department of Fish and Game. During the modifications that began in 2007, DFG came to the Ranch and electroshocked the fish to look for invasive species and pathogens.

“One fish out of all the fish showed signs of the whirling pathogen,” Alpers explained. “So DFG would only relicense us under a compliance permit.”

Some of the restrictions under this permit include only being allowed 45,000 pounds of production (according to Alpers he needs to be able to produce 80,000-100,000 lbs. to be profitable), and not bringing in outside fish.

The incubation barn to grow his own fish onsite is one area where Alpers needs to get DFG off his back. The eggs would be hatched in the fall, so they need to be inside to avoid the cold Eastern Sierra weather.

“We’ve found pictures of the Conway homestead that show that it had barns on it,” Alpers explained. “We wanted the outside of the barn to look like one of the old structures, and then the inside would be a state of the art incubation facility and visitor center.”

“But Caltrans and DFG are not communicating,” Alpers said. And while talks have supposedly been going on between the County and Caltrans, neither entity could report any decision as of last week.

Mono County Counsel, Marshall Rudolph, stated that the Board of Supervisors would be reviewing the Caltrans issues, as well as new issues raised by the State Department of Parks and Recreation, another granting agency, during closed session at its Sept. 20 meeting. 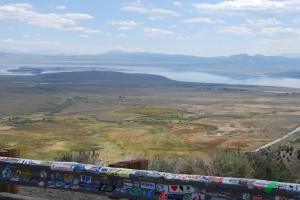 One beef that Caltrans has with the Ranch is its alleged disruption of this viewshed from Conway Summit.

“The letter from parks and rec is just raising questions, not accusing the County of violations,” Rudolph said. “It doesn’t have the same type of tone as Caltrans.”

Rudolph explained that the County bought the property in separate transactions over time.

Prior to the county’s purchase of Conway Ranch and the surrounding land the area was slated for development as a subdivision, according to Rudolph.

“It was a controversial purchase at the time, but the supervisors made the decision to do what they thought was in the best interest of the county,” Rudolph explained. The Board at the time had purchased the property to preserve open space, among other things. However, it had not wanted to use General Fund dollars, which is why the properties were purchased with at least three different grants, including the Caltrans and State Parks and Rec grants now in question.

“We all need to work through these problems one by one as partners,” said District 4 Supervisor Tim Hansen. “The place [Conway Ranch] is in way better shape now. We haven’t determined if it does indeed violate the grant.” He added that the County was expecting a letter from Caltrans with an update, “any day now.”

While Alpers waits for the County and the granting agencies to figure out what can and cannot be done on the land (he has not been allowed to sit in on the discussions between the County and Caltrans), he is taking what matters he can into his own hands. Conway Ranch is putting together a survey to send out to the public, both local and visiting, to determine what it wants to see at Conway Ranch.

“We hope it will give us an idea of whether we should stay or go away,” said Ranch employee Raven Angeles at a recent Mono County Tourism/Film Commission meeting. “We can’t stay competitive if we continue to have to buy fish.”

“We need the survey to know that we have people behind us,” Alpers told The Sheet. “It’s our way of doing something. We need a common vision that we want this place, and we need to prove that fishing is not a dying industry.”

There has been talk that at least one Mono County Supervisor believes fishing is dying on the vine.

“One supervisor does think fishing is dying but the rest of us believe it’s still a good thing,” Hansen said. “It may be changing, but it is still huge.”

Mammoth Lakes Tourism Executive Director John Urdi agreed. “Fishing is a huge thing for us and we need to focus on it. We need to build stuff around fishing to get people here and get them to come back. It’s foolish to think people aren’t coming here for it.”

“We can’t put all our eggs in the opening day basket,” Urdi explained about the editorial piece that highlighted fall fishing in the Eastern Sierra. “We need to get people here in the down times. Fishing is a huge piece of business we can’t overlook.”

And if the state’s budget continues its downhill slide, the County and the Town of Mammoth Lakes, Alpers’ two biggest customers, may need more of his trout to fill local lakes and bring in visitors.

“Right now we supplement the state [fish supply] but that could easily flip,” Alpers said.