Mother and daughter Nordic ski racers Nancy and Laurel Fiddler not only ski, train and race together, but Sunday they finished one/two in the 2011 Tannenbaum Classic.

The even bigger news is that they blew the doors off everyone else’s time in the 10K: making it twice around the Minaret Mile course up on Mammoth Mountain in a sizzling 20 minutes.

At the completion of the first loop, Laurel’s skis were almost scraping Nancy’s in front of her, and Laurel finished a scant 43 seconds behind her Olympian mom.

In many ways, the 2011 Tannenbaum Nordic ski race was a family affair. Everybody got into the act. Skiers raced. Parents ran the timing, handled registration, manned the course, gathered goodies for the fundraising bake sale. They also coached, cheered and supported their kids on the Nordic Junior ski teams.

Take for instance, the Thompson family. Dad Marty grew up in Mammoth, is a police officer and Mammoth High School football coach. Mom Heidi teaches at the elementary school. They came to cheer on their kids Martin, Carson, Meaghan and Ella, who were entered in each junior division of Sunday’s race.

Then there are Isabel and Scott Kusamoto, who did the timing for the race. Their son Connor (15:28) finished in fourth place in the Junior Boys Division.

But back to the race.

Usually held at Tamarack, lack of December snow moved the race up to the Minaret Mile at Mammoth Mountain Ski Area, between Mammoth Mountain Inn and Minaret Summit. Race director Ueli Luthi waved the first classic skiers out of the start at 10 a.m. The adults ran a two-loop 10K. It was a short race and tough, more like a sprint.

“To think that Nancy and Laurel Fiddler did the two laps in 20 minutes is amazing,” said Middle School Nordic Coach Robin Morning.

Mammoth’s Jonathon Bourne won the men’s division (24:29). His brother Andy was on the sidelines. “Go Jon, push. Feel the burn, you can catch her (third place finisher Carolyn Tiernan of Bishop),” he shouted. 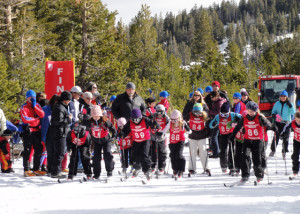 The kids take off at last weekend’s Tannenbaum Classic.

Next came a 3K for the junior skiers, both Mammoth High School’s nine members and the Middle School’s 24 racers. Coached respectively by Alana Levin and Robin Morning, the spirit and verve of these Nordic athletes is inspiring. “This year’s (MHS) team is an incredible group of individuals who make up an even more outstanding team,” Levin said. “I am so enthusiastic about the season ahead and seeing the potential of this team unfold.”

In addition, according to Morning, 18 of the Mammoth Chargers and Alpine J 4s and 5s entered the race. “It is great to have this crossover and joining together of the different teams from the Mountain programs,” she said. While waiting for their start the juniors sprinted up and down the side of the course. After their event, they went back up the course to cheer on the 13 little kids for their race.

Twelve elementary school kids raced with gusto on a 1K course to the cheers and whistles of parents and other racers. Seth Gacho won the boys division and Kendall Lach won the girls. Perhaps the girl who gave it her absolute all was Cecilia Bassler, who brought up the rear, in superb future Nordic style.

Although the majority of entrants were Eastsiders, there was a smattering of people from SoCal, which is appropriate, since the Tannenbaum race started back in the mid-1950s as a club and league race. It has long been part of a week’s training at Mammoth Mountain every December.

As the season begins, Levin believes all the components are in place for a significant development of a Nordic community. “Roy Moyer and Ueli Luthi at Tamarack Lodge and Cross Country Ski Center, Eastern Sierra Nordic Ski Association, Brian Ellison at Brian’s Bicycles & Cross-Country Skis, Mammoth Mountain Ski Area and the Mammoth Mountain Community Foundation have been an extraordinary support,” she said.

“Programs that Brian Knox at Mammoth Nordic and John Wentworth of Mammoth Lakes Trails and Public Access are developing feeders into the Nordic programs we are building by developing Nordic trails in the community for public use. I feel really fortunate to be leading the team at this time in Mammoth history. It’s an exciting time.”

Restaurant Skadi hosted the awards and provided a luncheon. Owner Ian Algeroen told the crowd that his grandmother had been a nomadic reindeer herder – a natural reason to support Nordic skiing.