Locals and visitors alike are daily bemoaning the lack of snow, but this unusually dry winter has one positive side-effect: the best ice skating season in recent memory.

Those who have skated a frozen lake or river know that there’s nothing quite like it. There’s something magical about skating around bubbles trapped in ice, or over ice so clear you can see fish swimming below; about seeing formerly familiar granite peaks in Yosemite, or the wooded ridges above June Lake, from an entirely new perspective.

Normally the skating season in Mono County lasts for a handful of days before the snow falls and bonds with the ice, creating a rough, uneven surface. But this year, local skating enthusiasts are astonished by the variety of available terrain, and the length of time these spots have remained in pristine condition.

“This is an incredible front country season,” said local photographer and backcountry skater John Dittli. “Ice skating can be super ephemeral. Last year we had about two days of skating. This is the best front country skating I can remember in a long, long time.”

While Dittli’s professed preference is for high country lakes along the John Muir Trail, “Ironically, the real high country lakes aren’t good this year because of snows in October and November,” he said. On the other hand, front country lakes like Silver Lake, Tenaya Lake, and Lundy Lake, are attracting skaters new and old from Mono and Inyo counties. Tenaya in particular has skaters raving: usually inaccessible from Tioga Pass without skis at this time of year, the ice is thick, and clear as glass.

Dan McConnell, another local skater, added Gull Lake to the list of top spots. “It just recently got thick enough to skate,” he said. “When that happens, the ice is best. You get the fewest cracks.” Rock Creek and Tioga Lake have recently been ruined by snow, he said.

McConnell also named Crowley Lake, which offers thousands of acres of skateable ice, including Crooked Creek and McGee Creek Bay, as a skating destination. However, when asked about Crowley, John Dittli was careful to note the risk of skating such a large lake that still has so much open water. “It’s not for the average ice skater,” he said. “It’s a real adventure. You need to be in a group that can take care of each other.”

Ice safety was on the minds of many skaters after a recent incident at Mono Lake. Last week, two Los Angeles tourists ventured out onto Mono Lake without skates after watching an ice skater traverse a frozen section near the lake shore. The tourists broke through the ice and fell into water up to their chests, but were lucky enough to be rescued by former Certified Ice Rescuer Instructor Dave Carle, who happened to be driving past on his way to Lee Vining.

“My wife Janet and I were driving from Mono City when we got to the shore of Mono Lake just south of Lee Vining and saw the two people on the ice,” Carle said. “We pulled over and saw them go in just after we parked.” The Carles raced to the scene, bringing with them a length of rope they use when ice skating. “The man got himself out,” Carle said, “but the woman couldn’t. It became obvious when she started shouting for help.” Carle successfully got the rope to her, and she used it to pull herself up onto the ice. The tourists were treated by paramedics who arrived soon after. Both came through generally unscathed. 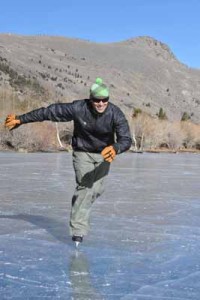 Carle explained that the frozen lake on Mono is a lovely but potentially dangerous phenomenon. Mono Lake is a saltwater body, but creeks and streams provide fresh water that separates in the cold and freezes. Although this ice can provide a thick enough surface to skate on, McConnell called it “sketchy.”

“You need to really look at the ice,” Carle said. “Perfect ice is the stuff that’s crystal clear. Then, with wind and melting, you start to get bubbling and cracks. You need to know that if you come back to the same ice a week or two later, you might not have good ice anymore. It’s not a guaranteed thing; ice changes.”

Always go with people who know how to read the ice.

Carry self rescue picks and a rope. (Pick-of-Life awls go for between $15 and $20 online).

Make sure you’re strong enough to self rescue, which will involve pulling yourself up over the ice.

Bring a change of warm, dry clothes. These will be crucial for avoiding hypothermia should you fall into the water.

Don’t skate on ice that’s less than three inches thick. To measure thickness, use an ice screw. Mark three inches and screw it through the ice.

Be aware that there are faults and thin spots in the ice that, regardless of these precautions, can still be dangerous. Ice can be thinner around rocks, where streams come into the lake, and near sunny shores.

“You shouldn’t just do this by yourself if you’ve never done it before,” Dittli said. “That would be akin to buying climbing shoes your first time and free soloing a 5.10.”

Dittli also referred backcountry ice skaters to a YouTube safety video, “What To Do If You Fall Through The Ice” (http://www.youtube.com/watch?v=ysnKtuUTt8k&feature=youtu.be ).

The final piece of advice offered to backcountry ice skating newcomers: buy your own pair of skates.

“My new definition of a local is someone who owns their own ice skates,” McConnell joked. At present, no store in Mammoth rents skates, but  Value Sports in Bishop sells used skates for $20 a pair.