Updated Jan. 30, 7:46 p.m. The following is the press release issued by the Mammoth Lakes Police Department this evening:

“On Sunday, January 29 at approximately 12:55 p.m., Mammoth Lakes Police, Fire, and Paramedic units were dispatched to the area of Minaret and Chateau Road for a car that had crashed into a condominium unit. The responding personnel determined that a 2003 Nissan Altima driven by Shannon Ellis, age 21 and a resident of Mammoth Lakes, was traveling westbound on Chateau and failed to stop for the stop sign at Minaret. The car continued across Minaret, jumped a snow berm, and went down a hill crashing into a condominium in the Snowcreek I development.

Neither Ms. Ellis nor her passenger, Kjelli Jennings, also a Mammoth Lakes resident, were injured. The Police investigation determined that Ellis was under the influence of alcohol. She was arrested and booked for 23152 (a) and 23152 (b) of the Vehicle Code (DUI) following a breath test which showed her blood alcohol level was .27%, more than three times the legal limit.

On Sunday, Jan. 29 at approximately 12:30 p.m., local Mammoth emergency services were called to Snowcreek I condominiums. According to Mammoth Lakes Fire Marshal Thom Heller, the pictured vehicle was headed westbound on Chateau Road and failed to stop for the stop sign at the the intersection of Chateau and Minaret Road. The car also failed to stop for a snowbank, which it clipped and traveled down the bank into Snowcreek I, units 1, 2, 3 and 4.

John Graves, who lives upstairs from where the car crashed, had been outside with his dogs in the very spot the car hit just seconds before the accident.

“I was letting my dogs out [to go to the bathroom] and had just gone back inside and closed the door when I heard a loud ‘Boom!’,” Graves said. “I thought something had fallen out of the closet.”

But when he opened his front door he saw the car at the bottom of the stairs. There were no injuries, but if Graves had been outside a few moments longer, it could have been a different story.

Graves estimated that the car was traveling somewhere around 40 miles per hour. He believed the car hit the snowbank and jumped, coming to a stop at his doorstep.

“I went outside and asked the two girls in the car if they were OK,” Graves said. He estimated that one woman was in her 30s and the other was in her 20s. The woman in her 30s was already outside of the car when Graves found them. She quickly told Graves that she was fine, but when he asked the other woman if she was OK, he received no response.

“The car was smoking and both airbags had deployed,” Graves explained. “I turned the car off. The one girl wasn’t responding to me, she seemed dazed so I called 911 and asked them to send an ambulance and a tow truck.”

There were however, no injuries, according to Heller, but the two female occupants of the vehicle were detained by the Mammoth Lakes Police Department. Graves suspected that they were intoxicated. At the time of this post The Sheet was awaiting further information from the MLPD.

Damages included destruction of the front porch. The corner of the unit downstairs from Graves was hit and a window was broken. Two of the three legs holding the roof over the porch area were also knocked down, according to Heller. 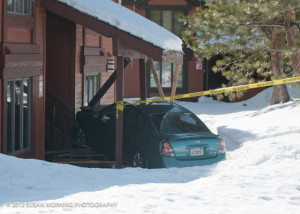 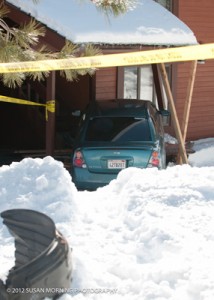