New G.M. has Mammoth Creek Inn on the rise

The Master Bedroom in the Master Loft is flanked by two decks offering expansive views of The Sherwins. (Photos: Lunch)

But he’s more than happy to have you take pictures of his hotel.

If I’d told Michael that the only time I had to write this story was at 3 a.m., he would have met me in the lobby at 3 a.m. to give me a tour of the facilities.

It’s this fanaticism on behalf of his hotel guests which has paid dividende for Edelshtain since he took the job last October.

He notes that when he started, Mammoth Creek Inn ranked #7 on www.tripadvisor.com among local area hotels (based upon customer reviews).

Edelshtain attributes the improvement to both customer service and reinvestment in the property.

A native of Israel, Edelshtain’s family immigrated to the U.S. in 1988 when he was 10 years old.

He began his career in the hospitality industry 15 years ago at Caesar’s Palace in Las Vegas.

Most recently, he worked at the “Guest House” at UCLA.

It also features a downstairs conference room for private parties which can accommodate up to 50 persons.

Above the second floor, in a cozy little alcove accessible via a spiral staircase, the Inn has a small room with a pool table and flat screen television popular with the apres ski crowd.

One area in which Mammoth Creek Inn is trying to drive business is with larger groups. Already, Edelshtain says the entire hotel has been booked by three different wedding parties for three different weekends over the months of June and July.

Edelshtain’s also been trying to create a partnership with reunions.com to drive group sales. 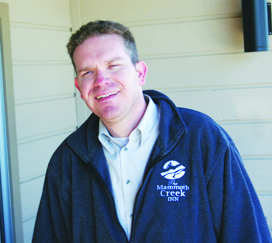 Among the renovated rooms, the piece de resistance is the Master Loft on the 2nd floor, a two-level room with fireplace and full kitchen and access to two decks which rents for $350/night and sleeps six.

Edelshtain had never visited Mammoth before he took the job and, shockingly, does not ski, although he promises to learn – next year. This year, he’s just too busy. He’d like to find time for a girlfriend as well, but his colleagues joke that the hotel wilol run better if he stays singloe and miserable so he can work all hours.

Mammoth Creek Inn is hosting an open house this coming Wednesday from 5-7 p.m. All are welcome. The event will be catered by the Java Joint.