Coach Rena McCullough said this is the 2nd straight year Lee Vining has won at least one CIF playoff game.

The team has won seven consecutive Hi-Lo league championships and finished the year with an 18-4-1 record. 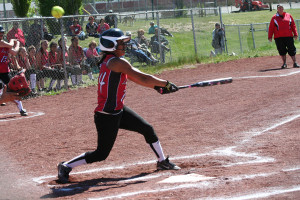 While Cristina Amezcua may have fouled this pitch off, that was more of an exception than the rule this year. Amezcua set school single-season records for the Lady Tigers this year with four homers and 39 RBI.

As Coach McCullough explained, there’s a core of girls at Lee Vining High School who play all three varsity sports (Volleyball, Basketball and Softball) and this has contributed to the camaraderie which has built a winning program.

Amezcua and Tasha McCullough have played together on all three teams for all four years of high school. And if that weren’t enough, both will play softball together at Lassen College next year.

On Tuesday, Lee Vining twice battled back from two-run deficits. A first-inning triple by Tasha keyed a two-run rally, and after falling behind 4-2, Cortney Duro belted a massive two-run homer to knot the score at 4-4 in the 4th inning.

Speaking of 4’s, it was just the 4th at-bat of the year for Duro, who was sidelined for most of the season with a knee injury and had just recently received medical clearance to play.