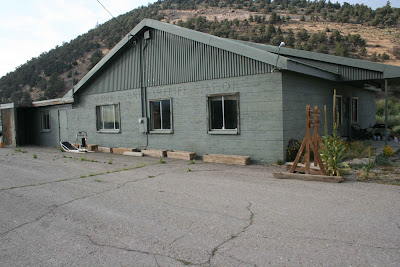 Who would’ve thought a building like this could attract so much attention? (Photo by Lunch)

Last week, Mammoth Dog Teams (MDT) owner and operator Jim Ouimet may have thought he was barking at the moon, facing possible eviction from the team’s headquarters at the Old Sheriff’s Substation just south of the Hwy 203 interchange along U.S. 395. But winds of change blew in Ouimet’s favor and he was allowed to sit and stay when Mono County Board of Supervisors took up the disposition of a lease Ouimet previously held on the property.
He didn’t even have to roll over or beg.
The 5-year lease had previously expired in 2008, but Ouimet and MDT continued to occupy the building. He and the County came to loggerheads during the last few weeks over whether his lease could be renewed and a further threatened eviction following inspections by County agencies revealing that Ouimet had living quarters on the property.
Ouimet has said it’s important to have either himself or one of his crew on site to monitor the dogs, and was hoping to simply extend MDT’s lease on the property. “The dogs love the place, people love to come by and see the dogs. We’re on hold until this whole thing is resolved,” Ouimet commented to the Board.
In support of Ouimet, Disabled Sports Eastern Sierra submitted a letter praising the dog team’s work and asking for cooperation to provide “a facility” for the team.
The hitch as the County sees it is that, according to County Counsel Marshall Rudolph, leases on the property have to be won and the laws encumbering the property say it’s required to go out for new bids at the conclusion of each lease term. Supervisor Byng Hunt questioned staff as to what other uses there might be for the building. County Administrative Officer (CAO) Dave Wilbrecht said the County’s received requests from other interested parties, including a Water District and nonprofit agencies such as Jazz Jubilee, all of which are jockeying for a place to stash their stuff.
Supervisor Tom Farnetti brought up the building’s poor condition prior to Ouimet’s arrival (it had sat abandoned for 2-3 years) and the significant amount of facility improvements MDT has done to spruce things up. Farnetti said with few options out there, he thought it important to use the Board’s discretionary authority to let things ride at least until spring, giving all parties time to work on the problem, as long as Ouimet resolves the “residence” issue. (A trailer or campers in “night watchman” type of occupancy was talked about.)
Hunt asked if the Board has discretion to do that, which Rudolph said it does, given that use of the property is governable by the County and a conditional use permit had to be issued before Ouimet occupied it to begin with. Rudolph said Ouimet’s situation basically qualifies as being a “holdover tenant or tenant in sufferance,” … not an ideal situation, he said, but at least the terms of the lease continue to apply and would allow Ouimet to “limp along” until a proper analysis can be conducted.
Supervisor Vikki Bauer said she was fine with the extension to spring, but also wanted to clear up OSHA and liability requirements for the site’s incoming power lines, which she said are required to be moved underground. Supervisor Bill Reid said the DSES endorsement carried a lot of weight with him, and then referenced an MOU for a thrift store in Walker that’s still operating, even though its lease has expired, which he said is not unlike Ouimet’s situation.
Reid was less than enthused about the idea of allowing other nonprofits or community entities to use the space for storage, essentially causing the County to compete with other private sector storage businesses. “On an operation like this, I wouldn’t be looking for the County to make money,” Reid said. “There’s a different set of goals here other than making money.”
Supervisor Hap Hazard recalled that the building was originally put up in 1969 as a place for stranded travelers needing shelter. In 1978, Hazard recalled, 60 cases of backcountry rescue were conducted out of that building. Modifications could easily be done to the building that would go to the lease language, which he said should reflect the building’s original intent and stewardship of how well it’s been taken care of and maintained. Hazard said he also was at issue with other possible applicants seeking to use it for storage.
He also said he doesn’t want any people living in the building, saying it doesn’t comply with any codes (septic, water), and has a history of mice and related Hanta Virus health problems. He also, however, recognizes the need for Ouimet to have some sort of presence on property.
Supervisors debated the pluses and minuses of going ahead with the bidding process in the interim. Hunt opined and Ouimet agreed that perhaps it would be better to know the results sooner rather than later. Reid, however, said the property currently exhibits several code, maintenance, health and other issues that have more questions than answers, and suggested postponing going out for bids until Public Works and other County agencies have a chance to properly evaluate and deliver an analysis of the site and building.
The Board directed staff to review the use and limitations of the property and report back in 120 days. During that time, Ouimet was basically granted a stay, and further was allowed to continue using his property as per the provisions of the lease.