This summer, five Mammoth Hospital doctors and their “celebrity” partners will be shaking their booties for a chance to be crowned the winning team at the “Dancing with the Docs” gala event, to be held Sept. 22.The fundraiser, a dance competition between physicians, takes the place of Mammoth Hospital’s Festival of Trees annual event. The hospital’s Fund Development Coordinator Bubby Greene pitched the idea to Community Relations Director Lori Ciccarelli after seeing a Dancing with the Stars spin off titled, “Dancing with the Priests.”

Ciccarelli loved the idea and easily got the board of the hospital’s foundation, the Healthcare Trust of Mammoth Lakes, to buy in as well.

“It’s going to be something fun for the town,” said Ciccarelli, who will emcee the Sept. 22 event with Chair of the Healthcare Trust and former hospital CEO, Gary Myers.

Many of the teams met for the first time this week to kick off rehearsals. As an additional bonus to the event, the teams will be filmed throughout the three-month process. Beginning July 27, local television station Sierra Wave will turn the footage into a nine-week miniseries leading up to the gala. New episodes will play every Friday evening (time TBA), and will then repeat throughout the week. The gala event will also be taped and play the week after it occurs.

The Sheet touched base with all of the teams this week to get a look at how the competition was stacking up.

Kathy Copeland, known for her fun-loving and energetic personality seems like she might be tough to keep up with on the dance floor, but at their first meeting on Wednesday night, Yuri Parisky proved a good match.

“Yuri will do his homework and Kathy will wing it,” said their choreographer Gigi Van der Riet to the camera after spending an hour and a half with her team.

The couple will be performing the Jive.

“The Jive is not as technical but it takes a huge amount of energy,” Van der Riet, a native of South Africa with a background in ballet, contemporary and jazz dance, said.

With zero dance background, Yuri did his best to pick up the moves quickly in the two-hour rehearsa.

“I’m doing this because I believe in the hospital,” Parisky said. “Patients I take care of benefit from the Healthcare Trust. Plus, it’s a great way to get back in shape, lose some weight and prove that talentless people can be taught to dance!”

“Going out and making fools of ourselves is a fun way to give back,” Kathy joked. She says her sole claim to dancing fame was at Whiskey Creek during her drinking days.

“It’s like the Romans feeding someone to the lions,” Yuri added.

Expect high energy and even some lifts to be part of Yuri and Kathy’s routine. The pair’s method of practice will be slightly unique since Kathy will be hiking the John Muir Trail for the entire month of August.

“We’ll be shadow dancing with Gigi when the other isn’t around,” Yuri said. “So when we come together the sparks will fly!”

Kris and Tommy were scheduled to meet for the first time this Friday night, June 29, according to Czeschin.

“I have no dance background, whatsoever,” Czeschin admitted. “I am really doing it to support the hospital.” He thought the team would be learning the moves to the Cha-Cha.

Czeschin, fresh off of the reality television show, The Amazing Race, didn’t see Dancing with the Docs as following a similar reality TV track. Perhaps no one had clued him into the miniseries portion, yet.

The team’s choreographer, Leah Dutcher was excited to get the process rolling. “I can say that I am quite anxious to get started,” she wrote via email. “Having been a Ballroom dance instructor for 10 years in Los Angeles, and again for 8 years here in Bishop, I know how much hard work it takes to get people to the ‘performance’ level. I hope my team is ready for a fun, but difficult, journey!

I do hope the event is a huge success!”

Disco actually has some of its roots in various forms of ballroom, and can be very elegant when done well. Mammoth Hospital Anesthesiologist Dr. Kurt Smith and the Mammoth Lakes Foundation’s Jamie Halverson plan to put Studio 54 sheen on a disco routine for their dance.

“I picked out ‘Last Dance’ by Donna Summer, who died recently. Disco was sort of aerobics before there was aerobics in gyms,” Smith noted, emphasizing its natural athleticism, which he thinks is a bit overlooked in the dance world.

Their routine is based on one that was created by Smith for an intra-fraternity competition during his college days. Smith won, always a good reason to dig up the old moves and dig out the old Saturday Night Fever suit and dancing shoes!

Halverson said she’s also done a few turns on the disco dance floor back in the day. “I’m came out of the disco era,” she acknowledged. “I remember bell-bottom jeans, hip huggers, white and red checkered tops, collars that were super big with the sleeves flared out.” Look for their routine to be as much about the costumes as the dancing. “When I think of disco, I think of fashion,” Halverson quipped.

As mentioned, this team will be choreography its own moves.

“The toughest part of putting this together has been finding choreographers,” Ciccarelli said. “I couldn’t talk anyone into taking on two teams.”

Jennie Walker and Stu Brown – Crazy like a Foxtrot

If it’s true that you can’t beat the classics, then Mammoth Hospital Emergency Medicine Doctor Jennie Walker and Town of Mammoth Lakes Recreation and Communication Director Stu Brown plan to highlight why the Foxtrot isn’t just formal, it’s also a lot of fun.

I was also a dancer for many years,” said Walker. “I studied mostly ballet and jazz, with some tap and a little ballroom experience. I made a short-lived attempt at a professional career, but realized that was not likely to be successful, so I went to medical school instead! I am really excited to have an opportunity to perform again!”

“My best friend was a ballroom dancer and I danced with my daughter at cotillion, which is the extent of my ballroom dancing experience,” Brown acknowledged. “But I would describe myself as a casual observer of ‘Dancing with the Stars.’” The duo hasn’t yet settled on music, but has started working out the steps.

Choreographing the pair is actress and theatre director Allison McDonell Page, who as it happens has a fair amount of dancing on her impressive resume. “I have little ballroom dance experience, though I hope to live vicariously through my great aunt who taught ballroom dancing for 40 years in Chapel Hill, North Carolina,” she said. “However, I was a dancer most of my life. I studied jazz and modern mostly. I choreographed through high school and college and was the Director of a Dance company at Harvard.

Page said she contemplated a career in musicals as a chorus girl, but wasn’t too sure of her singing voice and decided to change paths and become an actress. “I worked as an actress for 15 years in New York City, Los Angeles and theaters around the country. Though it’s been a while since I took a dance class, I did choreograph a number for last year’s high school production of “The Wizard of Oz” (she did “The Jitterbug” number). I think we will have a blast and will be the team to beat!” 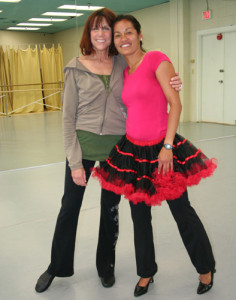 Dr. Kim Escudero loves to dance, but has never done so in a formal setting.

Now she’ll get her chance … if her partner John Teller shows up.

Johnny was late for practice on Wednesday because he’s busy competing in the Mammoth Motocross.

Mike Fiebiger, who employs Teller at Alpine Garage, is dubious of Teller’s talents.

“He can’t dance. He makes me look like Fred Astaire. You know white guys can’t dance. All we can do is slow dance.”

“And I’ve been pleasantly surprised [by Johnny],” Stayden added. “He’s been giving input. And they’ve got their song picked out.”

Teller and Escudero are dancing for Rhiannon’s kids, a fund set up for local children to help pay for families’ transportation costs if a child with serious medical issues needs to be transferred to a bigger hospital.

Ciccarelli said that there is a possibility of a sixth team if she can find another doctor to commit.

“There were zero takers when we first put the idea out there, but slowly the doctors have come around,” she said.

The competition will take place on Sept. 22 and money raised will go the hospital. Each team’s dance will last between 2-2.5 minutes. There will be two forms of judging at the gala. A panel of judges as well as a People’s Choice Award.

“The event is already bringing in people from all walks of life,” Ciccarelli said. Athletes, the medical community, DSES volunteers and more have already begun to approach her. Placing the doctors outside of their elements is a real draw.