In the early hours of Tuesday, Aug. 21, birders and biologists gathered with binoculars, tripods and scopes for a singular birding event: Fall Big Day at Owens Lake. Eastern Sierra Audubon Society (ESAS) educator and field trip leader Mike Prather has organized the Big Day, a bird count in both spring and fall, since the early 1980s. In that time he and other ESAS members have seen a dramatic change at Owens Lake as the Los Angeles Department of Water and Power (LADWP) has brought water back in an effort to mitigate dust, encouraging the return of thousands of migrating birds that once used the lake as a stopover on their long journey north and south.

Not since the early 1900s, before the diversion of the lower Owens River into the Los Angeles Aqueduct drained the lake almost completely of water, have residents and visitors witnessed such a spectacle of birds. The last recorded viewing of this kind occurred in 1917, when premiere zoologist Joseph Grinnell visited the shores of the lake in September and noted a spectacular conflagration of birds: “Avocets, phalaropes, ducks, [and] large flocks of shorebirds in flight over the water in the distance, wheeling about show en masse, now silvery now dark, against the gray-blue of the water. There must literally be thousands of birds in sight of this spot,” he wrote.

Little did Grinnell know, that by the 1920s only a 30 square mile brine pool would remain to mark what was once a 100 square mile lake.

Over the next decades the bird population dwindled, then virtually disappeared, while residents of Inyo County began to suffer a toxic mix of arsenic, cadmium, nickel and sulfates in the windblown dust from the dry lakebed. Then, in 1999, the Environmental Protection Agency (EPA) mandated that the LADWP begin a dust mitigation project in order to meet federal air quality standards. The DWP reached an agreement with the local Great Basin Unified Air Pollution Control District (GBUAPCD), and in 2001 began channeling water back into the lake in contained “T cells.”

“The first water came on in November,” Mike Prather recalled. “But the DWP did test plots beforehand. Algae began to grow in the plots, then came brine shrimp, then birds. So we anticipated huge numbers of birds to return.” Prather’s and others’ expectations were met immediately. The bird population at Owens Lake has continued to grow over the past decade of dust mitigation, with a record 74,511 birds of 81 different species counted this spring. “It’s the biggest wildlife spectacle in Inyo County,” Prather said. 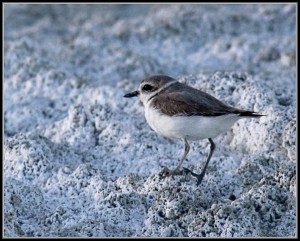 Prather originally conceived the Big Day count in order to provide accurate data to the DWP, California Department of Fish and Game (CDFG), Audubon Society, and State Lands Commission for the preservation of the bird habitat at the lake. The technique for counting so many thousands of birds in a single day is simple: “We divide by species, then we get a scope and start at one end of the birds and get a feel for what 20, 50, 100 looks like,” Prather explained. “Then we start ‘chunking’ using this visual estimation. This gets you within 10 percent up or down. We try to be conservative.”

Numbers at spring and fall Big Days have varied between 40,000-70,000 in recent years, but Prather noted that this flux has much to do with weather and timing along different species’ migratory routes. “You have to be careful with numbers,” he said. “We’re trying to focus on surveying habitats.” To that end, the Big Day not only makes a count of birds, but also maps where birds are on each cell, creating a model for different species’ habitat preferences based on factors like water depth, vegetation, and salinity.

This data has been used in the DWP management of aquatic habitats at Owens Lake for many years, but recently the data has also become an integral part of a new Owens Lake Master Plan created through a collaborative process between more than 60 organizations and interest groups including the ESAS, DWP, CDFG, the District, Inyo County, and the Owens Valley Indian Water Commission. The Master Plan, which DWP Public Relations Manager Chris Plakos said will hopefully be finalized by the end of this year, focuses on habitat, dust control, renewable energy, public access and recreation, and water conservation. Once the Plan is completed, the different agencies involved will have a framework to guide them in future projects on the lake.

One of the major concerns of the DWP addressed in the Master Plan is how to continue the dust mitigation project with less water. The project has grown from the initial 13 and a half square miles of shallow flooding in Phase 1, to the current 36 and a quarter square miles in Phase 8, and currently uses 95,000 acre-feet of water, according to Plakos. “How to save some of this water is not just a concern of the DWP, but of the whole state and country,” he said.

While saving water for the DWP, which provides water to a population of about 4 million in Los Angeles, may be a controversial subject in this area, water conservation at the lake is also a shared goal of the ESAS. One might think that preserving the aquatic bird habitat and conserving water used for dust mitigation at Owen’s Lake would be a contradiction. Not so, said Andrea Jones, Audubon California’s Important Bird Areas Director. “One of the goals of the Master Plan is to find more efficient ways to use water and still maintain the bird habitat,” she said. “The DWP will explore new ways to do dust control, and the Master Plan will make it easier to be innovative and make a higher efficiency mosaic, a richer habitat mix, while still maintaining that baseline habitat the birds need.”

“It’s a highly engineered and manipulated habitat,” said ESAS President Peter Pumphrey. “For a while we fought that, then we came around to using that engineering to our advantage.” DWP biologists and ESAS members have been studying what exactly each species of birds on the lake needs, including water level, salinity, topography, and vegetation. This means that no matter how the T cells shift and change in coming years as part of the dust mitigation project, the DWP will always maintain the same baseline and variety of habitat for the birds. This also means that the DWP may be able to use less water in the habitats if, for instance, data shows that certain species can thrive with less water and more vegetated land, or if species prefer water with higher salinity, which tends to evaporate more slowly, requiring less water use overall.

“It’s exciting to be doing this,” Pumphrey said. “The future of conservation is not in preserving what was there, but in finding ways to enhance what’s there now in areas that have been damaged.”

As for whether the ESAS might one day request the DWP expand the bird habitat to support the numbers that may have visited Owens Lake in the past, Pumphrey said, “Our position is that we’re satisfied with the Master Plan guarantee of no net loss of existing habitat. But I can see where it could be possible that the habitat baseline could actually grow in the future, as we figure out how to do dust control in a habitat-friendly way.” Said Chris Plakos in response, “If the proposal was made to the City [Los Angeles] to expand the bird habitat, that proposal would certainly be looked at.”

Until then, scientists and birders will continue to gather data, and marvel at the sheer number and variety of birds at Owens Lake each spring and fall Big Day. “It’s a haunting place,” Pumphrey concluded. “When I first saw it 20-some years ago I thought, ‘that’s where Owens Lake used to be.’ Now, I think it’s beautiful.”