For 3 days during the last week of August, Eastern Sierra Wildlife Care staff and volunteers rose to the challenge of caring for a tiny, day-old American Coot and embraced the joy of releasing a magnificent Golden Eagle. The busiest baby season in the rehab facility’s history had just begun to slow when the one-of-a-kind orphaned water bird was rescued at Twin Lakes and transported to the Center.

Weighing in at only 14 grams (about the weight of two quarters), the baby Coot immediately charmed everyone with her down tipped in bright colors, her red beak, and outsized feet. Coot babies are rarely seen in rehab; ESWC had raised a much older one in 2004. Out came the reference books, calls were made to other rehabbers, and we turned to the Internet for help as well. How to house her and what to feed her were the most urgent questions we needed answered.

While seeking answers, animal care staff were also preparing for the return of a one-year-old female Golden Eagle who was sent to Ojai Raptor Center after her rescue and admission on June 17, severely underweight at 6 pounds and unable to fly. Ten weeks later, now weighing in at 12 pounds and flying strongly, the adolescent eagle was coming home to the Owens Valley for her second chance. Ventura Wildlife and ORC volunteer Ginny Hoover, who has assisted with transport of more than 5 eagles to Ojai, would drive the eagle to ESWC the next day where she would spend the next 18 hours in a flight cage, resting from her long car ride and adjusting to the heat and elevation.

Staff and volunteers busied themselves with tasks at the Center that ranged from cleaning and disinfecting our large raptor flight to feeding miniscule amounts of formula and tiny mealworms to the equally tiny Coot every 30 minutes. Food was also thawed and made ready for a hungry eagle. The fluffy baby was housed in a clear plastic cage, one end resting on a heating pad while a feather duster—to simulate “mom”—was hung in the warm corner. The eagle’s housing was 6’ by 27’ with perches large enough for powerful talons the size of a man’s hand. 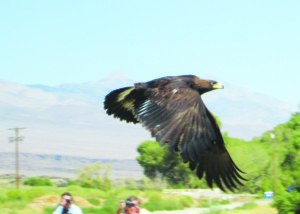 The release of the Golden Eagle

Sunday morning dawned clear and bright and at 9:30, the eagle was placed into her transport carrier for her last car ride—about 30 minutes to the release site not far from Black Rock Fish Hatchery. A caravan of excited volunteers and staff members followed the lead car down U.S. 395 while other staff and volunteers remained behind to care for our little down-covered patient and nearly 50 others.

A breeze was freshening as the carrier was placed facing a tree-lined canal with the blanket cover lifted so the eagle could see out. The door was opened and, after a quiet moment, the Golden Eagle stepped out calmly, paused briefly, then lifted off toward the trees, landing neatly on a large dead limb. The watchers cheered quietly while cameras clicked. A few minutes later she took off through the trees and veered left, disappearing from view. There was an air of celebration as people hugged and shared their impressions of the release. The eagle was free, reclaiming her wild birthright! What a happy success on this beautiful morning!

People began straggling along the dirt road back toward their parked cars when the eagle reappeared above the trees, flying into the wind, soaring with the current. Everyone stopped and watched; it was as if she had returned to let us see her mastery of the wind and to share her joy in her freedom.

Eleven days after her arrival at Eastern Sierra Wildlife Care, the young Coot now weighs in at 60 grams, more than four times her admission weight. She is finished with formula and happily chows down on mealworms, bloodworms, tiny fish, seed and greens. She bows down and performs a little “begging” dance, weaving her head back and forth before snatching a worm or fish from the hemostat. Her feet grow faster than her body, her colors are changing a little each day, and she is on her way to the day when she too, like the eagle, will claim her right to a wild existence.