Galaxy Centaurus A, the best known photograph of jets being emitted by a black hole.

They are the subject of much speculation and theory, and in pop culture they’ve been used for fodder in science fiction movies and TV shows. They are “black holes,” a region of space-time made up of collapsed matter so dense and compact that their gravity prevents anything, including light, from escaping. If you want to learn more about these real-life space monsters, there’s no better place than the Owens Valley Radio Observatory (OVRO) and Cerro Coso Community College “Explore Your Universe” Fall Lecture Series, which held its third episode on Nov. 9.

Each installment features talks by prominent astronomers. This time, Dr. Anthony Readhead from the California Institute of Technology (Caltech), spoke on the massive subject of “Supermassive Black Holes.” But instead of focusing on conjecture about what black holes are made of, and whether or not they are portals to other parts of the universe, other dimensions or timelines, he stuck to the mechanics of how they might be the most awesome engines driving galaxies and galaxy clusters.

South African by birth, Professor Readhead received his PhD from Cambridge, England, before taking a job at Caltech in 1977, where he has been in residence ever since. Readhead is a Rawn Professor of Astronomy at Caltech, Director of the Owens Valley Radio Observatory and a Senior Research Scientist at the Jet Propulsion Laboratory. He started his astronomy career at the Ratcliffe observatory near Pretoria, South Africa while still in his teens. His major fields of scientific interests are active galaxies and the supermassive black holes that power them, as well as the study of the evolution of the universe.

Einstein’s theory of general relativity predicts that a sufficiently compact mass would deform space-time to form a black hole. Around a black hole there is a mathematically defined surface called an event horizon that marks the point of no return. It is called “black” because it absorbs all the light that hits the horizon, reflecting nothing, rendering it invisible.

Geologist John Michell is credited with first putting forth the idea of a body so massive that even light could not escape in 1783. His idea was largely ignored during the 1800s, but during the 1900s, many prominent scientists including atomic bomb creator Robert Oppenheimer and others worked extensively on theories about what were then called “dark stars.” The term “black hole” wasn’t in our scientific lexicon until 1967.

Black holes, Readhead said, have an amazing story, one that interacts particularly with California. In 1912, George Schott, a Cambridge University mathematician, competed for a math prize, studying radiation. He posited that the gravitational force on the electron would cause it to spiral around and emit radiation, known as synchotron radiation. The faster it goes, including close to the speed of light, the more radiation is emitted, a premise no one else dreamed was possible even during the early 20th century. His work is the basis for today’s massive, powerful particle accelerators.

According to Readhead, Schott’s calculations, done just as an exercise, rank up there alongside those of Einstein. “He got all the theory right,” Readhead said.

In 1915, Einstein released his field equations as relates to the effect of mass on geometry and space. That same year, once those equations came out, physicist Karl Schwarzschild applied them to a body such as our sun, which is 1 million miles in diameter. If you squashed all the matter in the sun into a space smaller than 3 kilometers, the gravitational field would be so strong, that nothing including light could escape.

Just three years later, at the Lick Observatory near San Jose, young astronomer Heber Curtis was observing Virgo, a constellation in the southern sky about 54 million light years from Earth’s galaxy. He took an exposure on a photographic plate, which in those days required long exposure times, particularly when capturing clusters of distant galaxies. On that April day in 1918, Curtis decided it might be interesting to make shorter exposure, the first of its kind in astronomy. On that photograph, he found a curious “jet” steaming out of the center of the galaxy. Curtis had no way of knowing it at the time, but he’d stumbled on supermassive black holes residing inside large galaxy clusters.

This remained a mystery until 1963, when the first discovered quasar was also found to have a jet protruding from its nucleus. Quasars are active galaxies with nuclei the size of the solar system that outshine 100 billion suns. The central engines in quasars are now known to be supermassive black holes, which eject matter in narrow jets along their spin axes at close to the speed of light, but first a little more background. For starters, we might not know much about what they’re composed of, but we are learning more about how black holes behave. 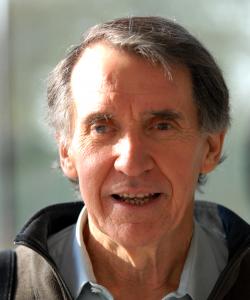 Every black hole has a flat “accretion disc” of matter orbiting it at an incredibly high speed. Matter is shredded into individual molecules, atoms and subatomic particles, and eventually spirals in towards the center.

Though anything within the black hole’s event horizon will remain trapped, its gravity has far reaching effects on nearby matter, light and radiation, long before they become doomed as a permanent part of the black hole’s collection. Supermassive black holes are thought to produce synchrotron radiation, noted by those jets Curtis found, gravitationally accelerating ions at near the speed of light through the polar magnetic fields, along what are thought to be hoops along the field’s polar lines. Those lines enter the space just around the black hole and get twisted and spun around, which is how the matter ends up getting shot into space as a jet.

Such jets have been confirmed by the Hubble telescope and computer simulation is going a long way to prove the theory 35 years after it was posited by in 1977 by scientist Roger Blandford.

Objects in the universe, as we learned in earlier lectures, look different when viewed in different radio wavelengths, including cosmic background radiation produced by the Big Bang itself. By the early 1950s, astronomers found the visible sky and what you would see with a radio telescope have almost no correlation. Lots of radio sources had been detected, but no one knew what they were, other than perhaps “radio stars.” In 1952, the second brightest source in the sky, Cignus-A, revealed an odd looking collection of galaxies. At first the interpretation was colliding galaxies, but later research would show that there was no way collisions would produce the amount of radiation coming from the Cignus-A cluster, which was determined to be 600 million light years away.

“This is crazy. When you look at the sky … the brightest thing you see is the moon, and the planets and nearby stars, then you look at the radio and the next brightest thing in the sky is that far away,” Readhead enthused. Only a few years later, astronomers determined that the emissions were coming from two distinct, and very large, sections of Cignus-A. In 1957, scientists Geoffrey and Margaret Burbidge determined that the energy output was calculated to be the equivalent of the annihilation of 10 million of our suns. There must be something else accounting for all that energy, a source far more efficient than even the nuclear engines powering stars.

Years later, following the discovery of the first quasars, Caltech Professor Maarten Schmidt was observing 3C 273, a quasar located in the constellation Virgo, and the twelfth brightest radio source in the sky even at 2 billion light years away. He made a photograph of 3C 273, revealing … a jet. “This is a very common signature with these beasts,” Readhead noted.

Radio astronomy, such as that used at OVRO, has helped make the greatest steps forward in studying these amazing anomalies. It would have taken decades longer for visual astronomy to find some of these quasars without radio frequency studies. The OVRO is one of about 10 such radio observatories in the U.S. making high-resolution images of deep space, on the order of seeing a human hair from 50 miles away.

Ejections of galactic matter along the spin axis of such jets can be as large as small galaxies themselves, with the spinning black hole as the source.

One major oddity about black holes is that, while they drag nearby space around with them as they spin, they produce electric fields, which leads to the creation of a magnetosphere. So, the angular momentum, or rotation, of a black hole can be determined electromagnetically.

Readhead said it’s now thought that almost all galaxies have a supermassive black hole at their centers, including our own spiral-shaped Milky Way. That black hole is estimated to be 4 million solar masses, each the size of our sun, its location easily plotted in space via stars rotating around an unseen object near Sagittarius A.

In the future, Readhead said science is going to work with gamma rays for what it hopes will yield a more precise look at the root of those jets, using the recently launched Fermi space telescope.

The jets —beacons that point to the black hole centers of these galaxies — serve as a starting point toward a greater understanding of the black enigmas that generate them, and what are perhaps the largest, most powerful engines, propelling, steering and ultimately consuming immense amounts of matter in galaxies across the universe.

The series’ final lecture of the season will be “Current and Future Missions to Mars,” presented by Pam and Tom Hoffman from NASA and the Jet Propulsion Laboratory in Pasadena on Wednesday, Dec. 5, at Cerro Coso College’s Bishop campus. Lecture is free, lasts an hour and starts at 7 p.m. Info: call OVRO at 760.938.6015 or visit www.ovro.caltech.edu.