Mammoth Ski Team’s Madeline Riffel took a pair of bronze medals during the first of three events in the Hole Shot Tour. The Hole Shot Cross Tour is a competition designed to bridge the gap between grassroots and world cup level for Snowboardcross and Skicross. The event also brings together athletes across the country to identify the top juniors in the country. Athletes 15 (SBX)/ 16 (SX) and older compete together in an open-class style event. The top juniors will be named to U.S. Snowboarding’s and U.S. Freeskiing Project Gold, a group of the top development athletes in the country who will train together in the summer and are invited to other select projects. Athletes also qualify for Junior World Championships and World Cup events from the Hole Shot Tour.

Once again, athletes from Mammoth High School swept the top of the podium across all events last Friday! While Fleur Connolly warmed-up the women’s snowboarding field with a win of over a second in the third race of the season, she finished the fourth race with a combined finish that was nearly 9 seconds ahead of the rest of the women. Devin Tubbs also completed his day with a double win in the men’s snowboarding races, while Sierra Gilfoy and Kevin Wolfe also each walked away with a double win in both ski races.  Ski coach Jimmy Morning said, “I am really pleased with our athletes. I think a great girls and boys team has been put together this season.” Snowboard coach Emma Romo said, “I am really excited to see how our team does at State Championships in March.”For more results: www.facebook.com/MammothMountainCommunityFoundation

Coach Lauren Oxfords pointed out that, “Mammoth XC ski racers managed to perform beautifully despite the rain, a slushy race course, & dense race traffic. These racers are dedicated and it shows in their racing.”

Mammoth Mountain Snowboard & Freeski Teams athletes, Jed Sky SNB, Greydin McCalla SNB and Carly Margulies SKI traveled to Aspen to compete in the 2013 USASA Rail Jam at Winter X Games 17. Ben Wisner, Director Mammoth Mountain Snowboard & Freeski Teams, explained that the athletes “were all in a USASA event on the X Games course, it is not a actual X Games event but one the qualified to enter through the Unbound Series at Mammoth.” “It was a great trip with all the athletes representing well with the boys just missing finals and Carly placed 4th in women’s ski. The course was exactly the same as the pros at X Games ride and was extremely technical. I was proud of how they all stepped up to the challenge,” reported Wisner. 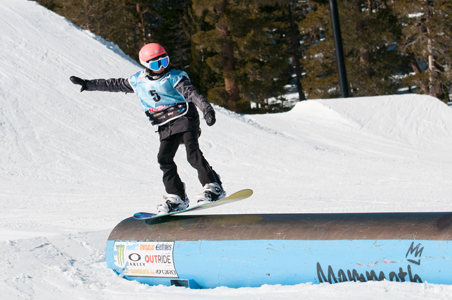 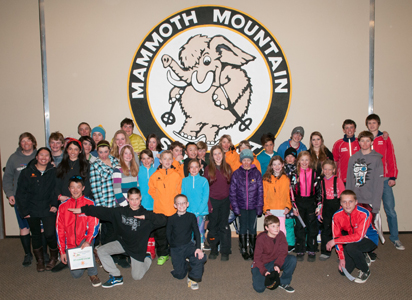 Executive Director of the Mammoth Mountain Community Foundation, Stacy Corless, recently announced the 2013 Academic Elite Team. Academic Elite Team status is given to Mammoth Teams athletes in grade 5 and up with a grade point average of 3.5 and higher. 111 student athletes were presented with the award, for which they had to apply and write an essay that explored how they balance snow sports and academics. Peter Hensley, free ski, Mammoth Middle School wrote, ”I don’t only work hard on the slopes, but I have maintained a 4.0 GPA for the past couple of years in middle school and I also love learning just as much as skiing so I guess you could call me the kid with a Ph.D. in ski.”

A full list of recipients can be found at: www.facebook.com/MammothMountainCommunityFoundation

Twenty-five Mammoth U14 racers competed in the Mount Shasta U14 North Series GS. But one athlete, Ryan Foulke, did double duty. First, Foulke raced in the Inyo/Mono High School event taking two third place finishes on Friday, then he traveled eight hours to race with his MMST teammates at Mt. Shasta on Saturday and Sunday. Eight members of the team took top 15 results including: January 26, 2013

A contingent of seven MMST U18/U21 athletes spent four days racing against some of the best racers in the western region at both Snowbird and Park City, UT. Their results are as follows:

PARK CITY, UT (Jan. 28) – Stacey Cook (Mammoth Mountain, CA) joins Lindsey Vonn (Vail, CO), Ted Ligety (Park City, UT), Julia Mancuso (Squaw Valley, CA) and Mikaela Shiffrin (Eagle-Vail, CO) as part of a winning group of 19 athletes named by the U.S. Ski and Snowboard Association to compete in the 2013 FIS Alpine Ski World Championships Feb. 4-17 in Schladming, Austria. The U.S. Ski Team has placed nine different athletes on the Audi FIS Alpine World Cup podium this winter for a total of 24 top three results, including 15 victories. The Best in the World women’s speed team has placed five different athletes on the World Cup podium this winter including downhill wins by Vonn) and Alice McKennis (Glenwood Springs, CO) and podiums by Mancuso, Cook and Leanne Smith (N. Conway, NH). Race starters will not be finalized until the Team Captains meeting the evening prior to each event. This is Cook’s fourth time being named to an Alpine Ski World Championship Team.