Pictured: Ricky Johnson is the “Crusher”/

His nickname is “Crusher.”

So it may come as little surprise that young Mr. Johnson enjoys playing football, playing both ways as a left guard and defensive end.

Johnson, who played on the Mammoth Youth Football team this fall, was selected to play in the “2013 Offense-Defense 7th Annual All-American Bowl Game” over the Christmas/New Year’s holiday in Houston, Texas.

This was the second year in a row that Johnson was chosen to participate.

According to Ricky’s mother Nancy, who works as the Pharmacy Manager at Vons in Mammoth, 680 players, ranging from age seven to high school seniors, participated in the Bowl games, including 60 in Ricky’s 7-8 year old age group.

In order to participate in the bowl game, they had to earn a spot at summer camps all over the country, attended by more than 7,500 players.

The games were played at the Houston Texans Reliant Stadium.

The Sheet spoke to Ricky this week about his experience.

Sheet: How’d you get the nickname Crusher?

Ricky: I used to be called Pup, but Pup is too cute for football so me and my Dad started thinking of a new name. I was the one who thought of Crusher. My Dad said, ‘If you want to be Crusher, you’re gonna have to hit hard.’ 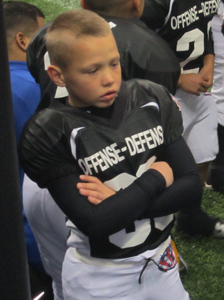 Sheet: Do you enjoy playing line? It’s not quite as glamorous as playing quarterback or running back.

Sheet: Your Mom says you trained daily for the 3 weeks after football season ended to prepare for Houston. (Ricky would meet with Alejandro and Francisco Flores and Brallan Martinez at Snowcreek every night at 5:30 for a two-hour work out).

Sheet: I understand you made a lot of friends at the camp.

Ricky: Yeah. Those kids who were in Houston play year-round. Some guys said they only take 3-4 weeks off from football the whole year.

Sheet: What are some of your other interests?

Ricky (while fiddling with a lacrosse stick): Baseball, basketball, snowboarding P.E. … and violin (Ricky just took up the violin this fall).

Mom (cutting in): No school, no football.

While Ricky loves Mammoth, and loves football, it is unfortunately somewhat doubtful you will ever see him line up for the Mammoth High School Huskies.

For one, Ricky’s father John (Ricky’s ultimate mentor and role model) was the victim of recent budget cutbacks within the Town’s Parks and Recreation department and is currently looking for work down in the San Diego area.

And two, as Mom says, if Ricky wants to pursue football at an elite level, he’ll probably have to live in a bigger place to do it.