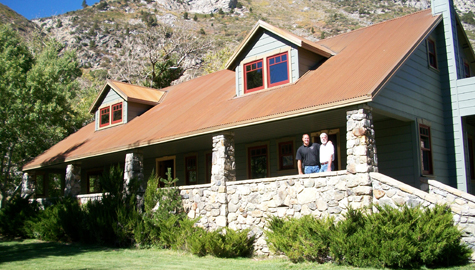 Co-owners Andrew and Gary Jones show off the newly renovated exterior of the 1930 Parker House at Silver Lake.

With the snow now melted away, the Silver Lake Resort proceeds again with its full-scale renovation of the historic Parker House, overlooking Silver Lake. The two-story, 1930 lodge was freshly painted late last year with a tri-tone exterior color — representative of the period — along with the new windows, doors, and roof. Co-owner Gary Jones is directing the renovations.

Sitting on Alger Creek, the lodge was built for water thief William Mulholland’s personal attorney Stanley Parker (also the namesake of Parker Lake). Mulholland and Parker chose the site while visiting the area to “negotiate” for water rights throughout the Mono Basin. The Parker family owned the structure until 1962 when a long-time June Lake family, Bob & Marcia Dore, purchased it from the Parker estate. The Dore family lived in it until 1983. It sat vacant until 1998 when Gary Jones purchased it.

On a long-term lease from the Forest Service, Jones first checked with the agency about his plans to turn it into an upscale bed & breakfast. “They were very positive about us changing its use from residential to commercial,” says Jones.

It took another nine years before Jones could begin renovations. Banks would not loan money for a project where the land wasn’t owned. So the Jones family saved up, and began drawing up plans in 2007.

The interior structure remains in tact, currently open framing. With originally only one bathroom, several more will be added for the planned five guests rooms. The original hardwood flooring was kept and will be renovated. All the plumbing and electrical had to be completely redone. The planned commercial kitchen will be able to cater up to 200 guests should a large wedding or event be hosted on the large front lawn overlooking Silver Lake and Carson Peak.

With construction being in a pay-as-go-mode, the Jones family expects it to take another three years to complete. The Jones’ are hopeful the grand opening will coincide with the 100th anniversary of the establishment of the Silver Lake Resort, in 2016.