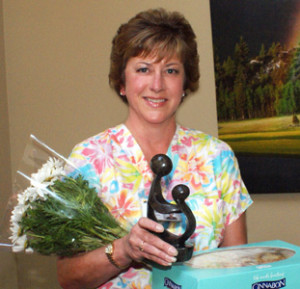 Mammoth Hospital nurses were honored recently with The DAISY Award for Extraordinary Nurses. The award was part of the DAISY Foundation’s program to recognize the amazing efforts nurses perform every day. A luncheon was held May 7 at Mammoth Hospital.

Out of eight nurses nominated in various specialties throughout Mammoth Hospital, the overall winner was Janet Jarvis, a nurse in Sierra Park Family Medicine. Janet has been a nurse for 29 years; spent the last eight at Mammoth Hospital. “I was very surprised to be honored with the Daisy Award,” Janet said. “I’ve always believed that the things I do really make a difference in the lives of my patients and their families. Winning the Daisy Award validates that. I love being a nurse and am honored to be a DAISY Nurse!”

DAISY is an acronym for Diseases Attacking the Immune System. The not-for-profit DAISY Foundation was established by family members in memory of J. Patrick Barnes. Patrick died at the age of 33 in 1999 from complications of Idiopathic Thrombocytopenic Purpura (ITP), a little known but not uncommon auto-immune disease. The care Patrick and his family received from nurses while he was ill inspired this unique means of thanking nurses for making a profound difference in the lives of their patients and patient families.

Nancy Johnson, Vons Pharmacy Manager, nominated Janet for the DAISY Award for consistently going well beyond what is expected of her on a daily basis. “Janet is the most efficient nurse I have ever met in my 16 years of experience,” said Nancy. “Whenever I call her with a question, she is quick to find out the answer or solution and respond to it. When a medication requires a prior authorization, Janet will go out of her way to get the medication approved so the patient never has to go without. She shows compassion for her patients on a daily basis. If their medication is too expensive, she will ask me to help her find a solution, as she feels genuinely bad for their situation. Janet cares personally for each and every patient she sees every day. I have also had experience with Janet as a patient at the clinic, and as my nurse, Janet has always given me her complete attention to my needs and shows genuine compassion for whatever is ailing me,” said Nancy.

At a presentation given in front of the nurse’s colleagues, physicians, patients, and visitors, Janet received a certificate commending her for being an extraordinary nurse. The certificate reads: “In deep appreciation of all you do, who you are, and the incredibly meaningful difference you make in the lives of so many people.” Janet was also awarded a sculpture called A Healer’s Touch, hand-carved by artists of the Shona Tribe in Africa.

“We are proud to be among the hospitals participating in the DAISY Award program,” said Kathleen Alo, Chief Nursing Officer at Mammoth Hospital. “Nurses are heroes every day. It’s important that our nurses know their work is highly valued, and The DAISY Foundation provides a way for us to do that.

For more information on the DAISY award and how to nominate a nurse, visit www.mammothhospital.com. –Mammoth Hospital Press Release