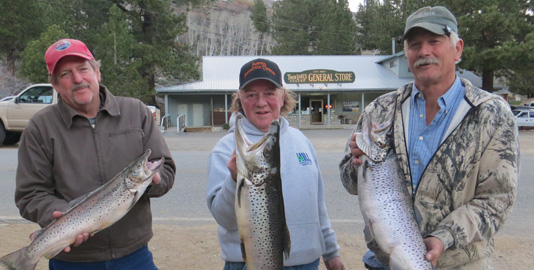 Steve Marti is a trout bum. So is his cousin Richard Sheltren. So am I. Three trout bums who live and die for spending time on the water in Mono County. Thing is, I didn’t know “Marti” and “Richie” until a week ago. I am glad I do now.

Here’s the story. About ten days back, I coincidentally run into Jack Lunch in a local business in town. In one arm, he’s porting a small bundle of his young, adorable baby girl. I comment on how cute she is, wondering if some day she will speak French like her mom. Lunch simply responds, “Yep. I have a fishing story I want you to report on.” Always curious about what Jack might know about fishing which I haven’t yet heard, I ask him what it is. He tells me that I need to call Bob Peters up in Bridgeport to talk about this rare occurrence of large quantities of double-digit pound trout coming out of Lower Twin Lakes (Bridgeport). I have heard mumbling about this before running into Lunch, and the idea struck a chord with me. It wasn’t more than ten minutes later that I was on the phone with the owner of the Bridgeport Inn, listening to what was going on in North County.

Bob and I talked about Lower Twin Lakes. It was more like Bob talked, and I listened. Bob also told me that he would give Steve Marti my name and number. Steve called me one day later with more information of what is going on in Bridgeport. Marti is the man when it comes to trout bumming it on Lower Twin Lakes.

Indeed, there is a rare opportunity to hook very, very healthy (think: HUGE) trout out of Lower Twin Lakes now, as a consequence of the early spring and warm temperatures. The science behind this? Spring came early this year and lit up the fishing all over the Eastern Sierra. With the early blooming of wildflowers and swallows present at Hot Creek, comes bug hatches all over the moving and still-waters of Inyo and Mono counties. What’s going on at Lower Twin Lakes is no exception. There is a warm layer of surface water at Lower Twin Lakes. This has ignited the midge hatch a little earlier as usual. Midges attract bait fish, namely the Kokanee Salmon which was introduced into Lower Twin Lakes back in the 1960’s. The salmon in this body of water don’t grow much larger than a foot in length. They are plankton-eaters in their native environments, but they have substituted midges for phytoplankton in the Eastside. Where the salmon go looking for food, so do the carnivorous brown trout that aggressively feed off these smaller, but tasty, bait fish. Anyone who knows of the brown trout of Lower Twin Lakes knows that they are traditionally huge. “Why?” I asked Steve. “Because the water is so cold in Lower Twin Lakes, their lifetime metabolism slows down, hence they live longer lives, and grow bigger.” This means, for example, that a 17-pound trout caught out of Lower Twin Lakes is probably about 13 or 14 years old, according to DFG biologists. So how does all this science translate to fishing? Well, I found myself on a boat with Steve and Richie last Saturday evening, and it was a great time.

Marti and Richie have devoted most of their lives to the waters of Lower Twin Lakes in Bridgeport. They are the fourth generation of anglers on the water. Marti is the owner of Twin Lakes Resort. Richie is his partner-in-crime. In the trout bum world, this means that Richie beats him up at a few rounds of cribbage until they are ready to troll for four hours every single evening. I was super stoked to see that these two have not, nor ever will, tire of trout fishing. They are my newest favorite superheros.

We spent four hours trolling sink lines with huge Rapalas and other large lures around the lake. It is a different type of fishing for me. I spend no less than five days a week pitching flies at Hot Creek. To get on a boat and troll Twin was as foreign to me as tarpon fishing off the Florida Keys. With Richie at the helm of the boat most of the time, Marti taught me everything of what we were doing. We were first seeking out the trout on the lake. We had the fish finder, and we would mark points where large schools existed. Those large schools were usually around 45 – 70 feet deep. After finding several marks, we then connected the dots, and backtracked back over them. Several times, we went through huge schools of trout. We spotted eagle in the skies, but never got hooked up that evening. I can appreciate though what we did. It is like trophy buck hunting: You pass on the opportunity several times to harvest a forkie only to look for that 4-plus pointer. We didn’t bang bambi’s brown trout counterpart that evening, but I saw some majestic water, and I have no doubt that they are in there. You just gotta put in the time to troll to reap the rewards.

The waters of Lower Twin Lakes in Bridgeport are currently producing impressive trout. Browns that weigh in at 10, 12, 14, 17 pounds. Waters will warm up in a couple weeks and tactics will change, but the large trout will be there still to be caught. Marti told me that in a couple weeks, the best way to fish for them will be with Chui Tub Patterns, as the sucker fish make their way toward shoreline from the deep waters, and the browns lay in wait to ambush them from behind rocks and stones in the lake. In short, the trophy trout are there for you to hunt and take, if you are willing to put in the time.

I don’t know a lot yet about Lower Twin Lakes, “yet” being the operative word here. I’m going to spend a lot of time this summer up in Bridgeport. Lately, I’ve been completely and totally obsessed with fly fishing The East Walker River. Marti and Richie are bound to see me again soon enough, as I will mix it up midge fishing “The Res” and streamer Chui Tub streamers at huge browns in Lower Twin Lakes. If you want to catch large trout, it would serve you to come across Steve and Richie, and spend time on Lower Twin lakes. The number of Lower Twin Lakes Marina is 760.932.7751.

A more detailed report can be found at http://kittredgesports.com/fishing_report.php. Leonard guides for Kittredge Sports. Call 760.934.7566.