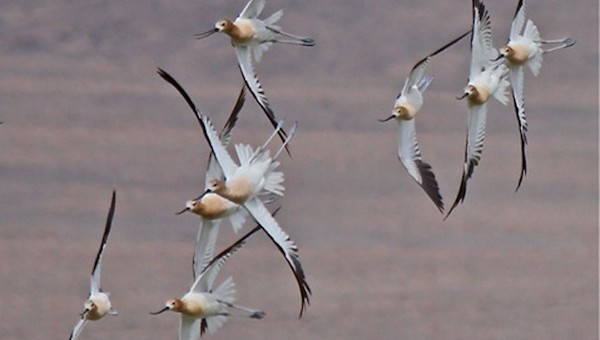 I really like birds. Everyone always wants me to say that I can’t stand to go near them, just like they want Janet Leigh to confess that she can’t bear to take a shower. Well, I’m sorry to disappoint you.

Tippi Hedren, star of Hitchcock’s classic “The Birds,” will therefore be pleased to learn that bird populations are spiking at Owens Lake.

Local birders witnessed a stunning congregation of birds at Owens Lake during the sixth annual Spring Big Day on April 23. ESAS (Eastern Sierra Audubon Society) recently released the number of birds counted on the lake during the Big Day, which occurs in spring and fall of each year. This spring, participants counted a whopping 114,999 birds, up from last year’s spring high of about 75,000.

The largest difference was in shorebirds, ESAS reported, with some 20 shorebird species identified, including American avocets and Least and Western sandpipers. Shorebirds accounted for some 63,524 birds out of the total count. The total number of different species of birds on the lake was recorded at 67.

“There are many possible reasons for such high numbers this year,” said count coordinator Mike Prather; “we can only hypothesize in trying to find the answer.” Migrating birds may have been attracted in greater numbers to Owens Lake because, in this second drought year, water and habitat in other areas is scarce. Prather also noted that strong northern winds led up to the Big Day, and may have encouraged birds to stay longer on the lake to rest and refuel.

As for the rise in shorebirds, Prather explained that “shorebirds require specific types of habitat, and many are in decline due to loss of marshes, wetlands and tidal flats.” Owens Lake, which provides water and shoreline in a vast, dry region, would present a welcome layover for these birds.

ESAS co-organizes the Owens Lake Big Day with the LADWP (Los Angeles Dept. of Water and Power), using the count as an opportunity to collect data on bird populations to inform the Owens Lake Master Plan. “All of the data collected becomes part of the management program for wildlife at Owens Lake,” said Prather. “It is incorporated into the Owens Lake Master Plan Draft Habitat Suitability Model, which makes sure that the current baseline wildlife values at Owens Lake are not diminished.” ESAS and the LADWP also share their data with the Audubon Society, the California Department of Fish and Wildlife (CDFW), Great Basin Unified Air Pollution Control District, Inyo County Water Department, and the Point Reyes Bird Observatory.

Historically, Owens Lake provided a crucial stopover for birds migrating along the Pacific Flyway during spring and fall. Tens of thousands of shorebirds, waterfowl, and other migratory species, some of which travel from South America to the far north of Northern America, stopped to feed on brine flies and other insects that collected on the surface of the lake. However, with the completion of the Los Angeles Aqueduct in the early 1900s, much of the Owens Lake water was redirected to Los Angeles. By the 1920s, only 30 square miles marked what was once a 110 square mile lake. This depletion not only devastated the local habitat and wildlife population, but also created a toxic dust hazard for residents of the area.

In 1999, the Environmental Protection Agency (EPA) mandated the LADWP to begin a dust mitigation project in order to meet federal air quality standards. The LADWP reached an agreement with the local GBUAPCD, and in 2001 began channeling water back into the lake in contained “T cells.” With the reintroduction of water to the lake, ESAS saw the almost immediate return of migrating birds.

In 2008, the first year of the Big Day Count, surveyors counted about 45,000 birds. That number has steadily increased, with last year’s previous high of 75,000 birds. However, for the past several years, the LADWP has begun to consider cutting its water use for mitigation on the lake, which comes in at about 95,000 acre-feet. The LADWP wishes to cut that number by about half, capping their mitigation responsibility at the current 45 square miles.

Prather explained that this desire does not necessarily run counter to the desires of ESAS and GBUAPCD. Since 2007, ESAS has worked in conjunction with over 60 agencies, including the LADWP, GBUAPCD, CDFW, Inyo County, and the Owens Valley Indian Water Commission, to create an Owens Lake Master Plan that will preserve the current habitat, control dust, and conserve water. “Through cooperative efforts by all stakeholders a plan has been drafted that would accomplish all of these goals,” said Prather. “There is enough water used at Owens Lake for dust control to provide for large, robust habitat areas, reduce water consumption by around half and still control the regional health hazard caused by the dust.”

Andrea Jones, Audubon California’s Important Bird Areas Director, explained at last year’s Fall Big Day that this will require the LADWP to explore new ways to accomplish dust control, making “a higher efficiency mosaic, a richer habitat mix, while still maintaining that baseline habitat the birds need.” For instance, the LADWP may be able to use less water in certain habitats if particular bird species thrive with less water and more vegetated land, or if species prefer water with higher salinity, which tends to evaporate more slowly, requiring less water use overall.

Prather noted that the Owens Lake Habitat Work Group, composed of the LADWP, GBUAPCD, CNPS, CDFW, Inyo County Water Department, and Audubon-California, have put in over 100 hours of work with consultants and experts on water, habitat and wildlife, and that “the Group feels that the quality of the habitat can be enhanced and thereby use less water and require less areas.”