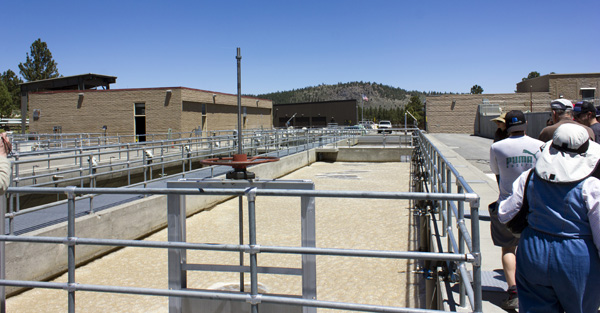 The Mammoth Community Water District gave its first open house on the 24th of May, inviting locals to come see how the water redistribution process works and show them what goes on behind the scenes at the District.

A group of twenty or so, led by Betty Hylton, a project specialist at the District, marched onto the MCWD’s malodorous wastewater treatment plant where, by passing through several channels and buildings, sewage is filtered and made potable. Now, when I say “filtered,” you probably think of those home filtration systems you can buy. Actually, the Water District’s system is far different from that.

Things start with the grinder, which eliminates the solids — food, plastics, diamond rings, and even unfortunate mobile phones. What’s left moves to the primary clarifier, where heavy items sink to the bottom and floating ones are skimmed away. From there, the particles (heavy and light) head to the digester, and the water continues to the aeration tank, which is filled with bacteria (and oxygen to keep it alive) that eat the waste.

When finished with the aeration tank, the waste water returns to a clarifier, this time the secondary one, and the satisfied microorganisms sink to the bottom. By the time the water exits this clarifier, “it’s pretty clean,” said Betty Hylton. This water then goes through a filter to remove any remaining toxic particles and then is treated with chlorine to kill any residual bacteria. As the bacteria die, the chlorine fades as well. The end result is fed to a pond, which supplies the golf course in the summer and is released into Laurel Pond in the winter. Hylton says this water is “clean.”

“We don’t say that you can drink it, but there’s a good chance it would not make you sick.”

Returning to the particles that headed to the digester, they are kept there for 20 to 30 days. These are minimized by more bacteria (also oxygenated) and eventually brought to a belt filter press, which extracts any remaining liquid from the solids. It must be said that the solids on this belt are not visually distinguishable from excrement, though Betty Hylton assures they are different. “The organic materials have been eaten by the bugs, so all that’s left is plastic that the bugs can’t eat and the bugs themselves, being squished down.” The remaining solids are taken to the dump.

The MCWD’s main source of power is an array of about 4,000 solar panels. “It produces enough energy to account for about 80% of the waste water treatment plan’s energy needs,” according to Hyleton. “After 25 years, the District will see a cumulative savings of $4 million. It’ll pay for itself in the 11th year of production. So far it’s been a great investment and it reduces our carbon footprint by 1,700 tons of carbon a year,” she added.

Also during the half-hour presentation, Hylton explained the difference between ground and surface water. “Ground water uses eight times more energy than surface water. Pumping it out of the ground is energy-intensive, and so is the treatment process,” she said. The District wants residents to be mindful of their water usage, because it does take a substantial amount of power to pump water from the ground if it’s not available on the surface.

Lake Mary, said Hylton, is “our only long-term storage facility, other than our aquifer, which is underground.” The Lake can retain about 1 billion gallons when full, and the District is allowed to lower it 5.7 feet, which is the natural low level for the Lake.

In addition to Lake Mary, the District has 2 ground water treatment plants, 8 production wells (which water is drawn from), and 36 monitoring wells (which are used to test the health of the aquifer).

For its first open house, the Mammoth Community Water District did a great job of informing locals of its process and giving them a tour of its facilities. If you didn’t have a chance to make it, you can always call 760.934.2596 with questions.