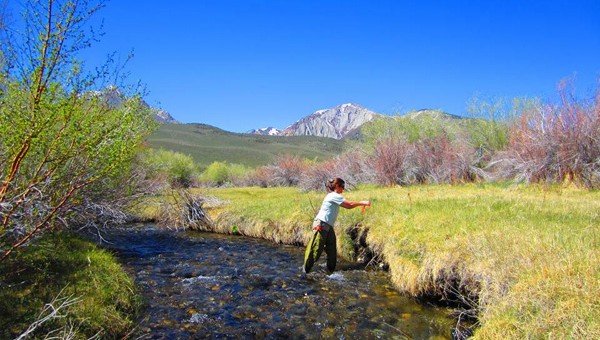 A NEON staff member on site at Convict Creek at SNARL.

NEON is coming to the Eastern Sierra, and I don’t mean the bright colors that accompanied big hair in the ‘80s.

“It’s a systematic way to measure change in the ecological environment across the country,” said Dan Dawson, Director of the Sierra Nevada Aquatic Research Laboratory, located in the Eastern Sierra between Mammoth and Crowley Lake.

The three top items under the microscope will be climate change, land change and the effects of invasive species on ecosystems, according to NEON Senior Visiting Scientist, Dr. Louis Pitelka.

“There’s no doubt that the climate is changing, the debate is just what’s causing it,” Pitelka said. “But what’s important are its effects on ecosystems.”

Both Pitelka and Dawson are excited by the huge data set that will be created by NEON.

“We’ll be studying the causes of change and the effects across the U.S. using the same methods,” Pitelka said.

The project will set up sites across the country to look at change at each local site and compare it to change, nationally for the next 30 years. NEON collects a standardized, integrated set of atmospheric, soil, organismal and aquatic data at each field site, according to the website.

Locally, NEON is also a chance for SNARL to be recognized for its role and value in national aquatic ecology.

“SNARL was relocated from the original core site for region 17,” Dawson explained. There are 20 domains/regions in the NEON program, each with a terrestrial site and an aquatic site.

“The NEON observatory includes 20 eco-climatic domains that cover the contiguous 48 US states, Alaska, Hawaii, and Puerto Rico. Each domain represents a distinct region of vegetation, landforms, climate, and ecosystem performance,” according to the website.

“The high Sierra is fairly pristine without many pollutants,” explained Pitelka.

In most cases, the terrestrial and aquatic sites are near one another, which was the original goal with the chosen aquatic site for region 17.

“SNARL was eliminated at first when NEON was choosing sites because it is on the east side of the Sierra and NEON was going to focus on the west side,” Dawson said. “However, the site originally picked for the aquatic work was deemed unsuitable.”

At the last minute and with help from a friend, SNARL was given the slot, even though that meant the terrestrial and aquatic sites would be on opposite sides of a mountain range.

“Ideally you would have the terrestrial and aquatic sites in the same location, but that’s not always possible,” Pitelka said. SNARL’s complementing terrestrial site is at the San Joaquin Experimental Range, about 20 miles from Fresno.

In addition to the 30-year monitoring project of NEON, SNARL will also be one of 10 sites that will participate in an accompanying 10-year experiment called STREON, or the Stream Experimental Observatory Network. While NEON will gather data from natural change, STREON will force change by manipulating the stream, and record data produced from the manipulations.

“STREON will force change to see how the ecosystem responds,” Dawson explained.

Another reason that the arrival of NEON is a big deal for SNARL is the large amount of resources it will make available in the region.

Dawson expects the data produced to be valuable on its own, but to also act as a jumping off point for additional research and study. It would be at the disposal for the likes of graduate students to use for projects, as one example.

“Additional research will tier off of that data,” Dawson said.

Pitelka will be the speaker for the final installment of the SNARL 2013 Lecture Series on Thursday, June 6 at 7 p.m. at the Green Church off of U.S. 395. He will further discuss the NEON project, and will share ways for the public to become involved through citizen science projects. The lecture is free but seating is limited.

The NEON site at SNARL is expected to begin construction in 2014.