With this season’s drought restricting water use in towns and cities across the west, it comes as no surprise that Mammoth may soon be raising its water restrictions from Level 1 to Level 2. Level 1 Water Restrictions have been in place for the last 15 months. The restrictions aim to reduce water use by 10 percent.

Level 2 Restrictions would aim for a 20 percent reduction.

The shortage of water in Mammoth is the result of not just this dismal snow season, but also of the cumulative effect of the last two below-average seasons, reported Mammoth Community Water District (MCWD) General Manager Pat Hayes at Wednesday’s Town Council meeting.

Snowmelt affects both MCWD surface water, which the District draws from Lake Mary, and the nine District groundwater wells in the Snowcreek, Eagle Lodge and Sam’s Wood Site areas. Hayes reported that this year, according to the most recent snow survey sampling, the snowpack water content is 16.6 inches. The only year with less water content on record was the drought of ’76-’77.

“We were pacing [that year] all the way until February,” Hayes said.

This year, he said, the area has seen 38 percent of average annual rainfall. Last year was 84 percent; the year before, 45 to 50 percent.

“If we were relying just on surface water, we’d be in pretty drastic circumstances,” Hayes said. “Surface water is usually gone by July. This year it may be even sooner.”

While the District has also relied on groundwater to supplement its water supply over the past 20 years, even the groundwater wells are feeling the strain of three drought years. Hayes noted that Well #6, “one of our bigger producing wells … is starting to get into the ‘caution range.’ We know we’ve still got water there, but it’s a trend downward that you don’t want to see.”

The District calculates a maximum applied water allowance (MAWA) for users, or an amount of water required to make up for evaporation and transportation. “It’s kind of like a [water] budget,” Hayes explained. Last summer, he said, 40 of the District’s top 75 users exceeded their MAWA by 200 percent or more.

Some of these users also ignore the District’s Level 1 Water Restrictions, which include watering only every other day, and ceasing outdoor watering between 10 a.m. and 5 p.m. 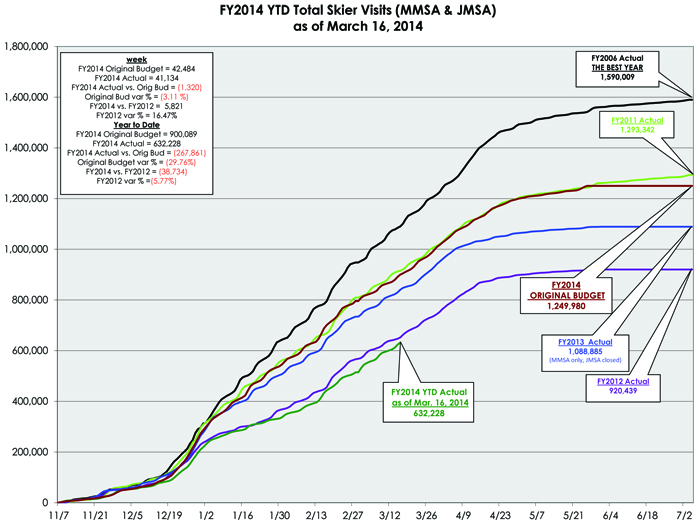 One of these users had a water leak of 500 gallons per hour, Hayes said. Once the District alerted the user to the leak, “They saved about $10,000 a year,” he said. “There is also an economic incentive to take this on.”

Last year, by locating such issues and alerting users, the District saved a total of 10 million gallons of water. “Customers saved about $40,000,” Hayes said.

Hayes noted that the Town can also make improvements to its water use. While Shady Rest has only exceeded its MAWA “by a little bit,” Hayes said, conversely, the narrow strips of grass on Old Mammoth Road “exceeded the allocation by five times.”

One of these areas along Old Mammoth is taking on 30 feet of water per year on every square foot, Hayes said. He added that the District receives regular reports from citizens of irrigation water running down the street.

The Town currently exceeds MAWA by about 5 million gallons of water per year, which costs about $42,000, Hayes said.

The District is in the process of rolling out a new program that will provide water use interval data to customers. “The customer will be able to log in to the MCWD website to see how they’re doing,” Hayes said. “Right now, you have the equivalent of going to the gas pump five times a month, and not knowing how much gas you’ve pumped and how much it cost you. So this interval data will give you a lot more information as to how you’re using your water.”

The District aims to complete this program by the end of the summer. Other water reduction efforts include a rebate program for water efficient toilets, showerheads, clothes washers and pressure reducing valves for irrigation systems.

In spite of these changes, the summer could still see a rise in water restrictions. “We could go to 20 percent,” Hayes concluded. “It’s completely dependent on how those wells hold up, and how much water is being consumed.”