You know, I started the week thinking that Town Attorney Andrew Morris was just another guy out to make a buck at taxpayer expense, but if you’re the Town Attorney and they just keep calling you … well, is it the fault of the drug user or the drug supplier?

Let’s start where we left off last week. I received the following email from Morris over the weekend:

“I noticed an inaccuracy in today’s (March 15) editorial that I’d like to point out. I left Best Best & Krieger at the end of 2013 and I’m now a sole practitioner. BBK does continue to do work for the Town, but I have no ownership, employment, or financial connection with the firm.

Incidentally, the reason for having separate attorneys for the hearing officer and for the staff who are essentially acting as prosecutors is that a number of court cases have held that having the same attorney advising both the hearing officer and the prosecution doesn’t provide due process.  It’s unfortunate that the Town winds up having to pay for two attorneys, but that’s what the courts say is required in order to be fair.”

It appears that Morris left BB & K in order to take a salaried position as Truckee’s City Attorney (he couldn’t become an employee while remaining a partner of the law firm).

According to the contract approved by Truckee’s Council last November, Morris is paid $140,000/year by the City of Truckee. The contract language states that “while he [Morris] most likely will not work full-time for the Town, he will, like any salaried employee complete his job tasks in whatever time is needed.”

While the contract specifies he be available at all times, it permits him to serve as Mammoth’s attorney.

“Unlike former Town Attorney Peter Tracy, who was a Town employee, Morris’ firm is contracted and paid on an hourly basis.

‘Everything is done on an hourly basis,’ said Morris, ‘because that’s what the Town wanted to do. Going forward, [the cost of] legal services should come in lower because the bankruptcy is done.’ Morris estimated the Town should expect to pay about $250,000 annually for legal services.

Tracy, by contrast, used to make approximately $165,000 annually plus benefits.

Morris said, however, that his is a larger firm that handles all manner of items which Tracy may have once contracted out elsewhere.

Morris says he personally spends about 40% of his time on Mammoth matters, though this percentage does not reflect the total time his firm spent on Mammoth.”

Morris estimates he’ll bill the Town about $10,000/month for the first three months of 2014. Meanwhile, the Town spent close to $15,000 in January on special legal services provided by Best Best & Krieger.

“Special” services often relate to personnel matters. The Town has seemingly spent $5,000/month on the Hugelman case for the past several months.

Adding it up. Mammoth spent approx. $25,000 on legal services in January, and it doesn’t appear like there’s an end in sight.

Morris, who has experience working as a Town Attorney in numerous locales, said that “Mammoth has an unusually high number of [legal] issues for a town its size.”

Morris said that most of the work he does is at the request of staff, not Council.

Aside: One wonders whether the airport settlement has left the Town gun shy and more disposed to call an attorney at the slightest provocation.

The Sheet did ask Morris whether it might be a wise idea to have him appear at Council meetings via this newfangled device called the telephone. Reason being that travel time to attend meetings is included as part of Morris’s contract, and the Town pays approx. $900 in travel for each meeting Morris attends.

Morris said, “I think having a personal presence is worthwhile … it’s easier [for Council] to ask questions if you’re there.”

But as Morris says, that’s not his decision to make, and if Council wants him to appear telephonically, that’s how he’ll appear.

The City of Bishop, meanwhile, recently floated an RFP (Request for Proposals) for its City Attorney position.

The Town received seven bids. Jones and Meyer, based out of Fullerton, got the contract.

As Bishop City Councilman David Stottlemyre explained, while Ryan Jones is now Bishop’s official attorney, he can appoint someone to serve in his place. In other words, it may appear as though nothing’s changed and current Town Attorney Peter Tracy never left. 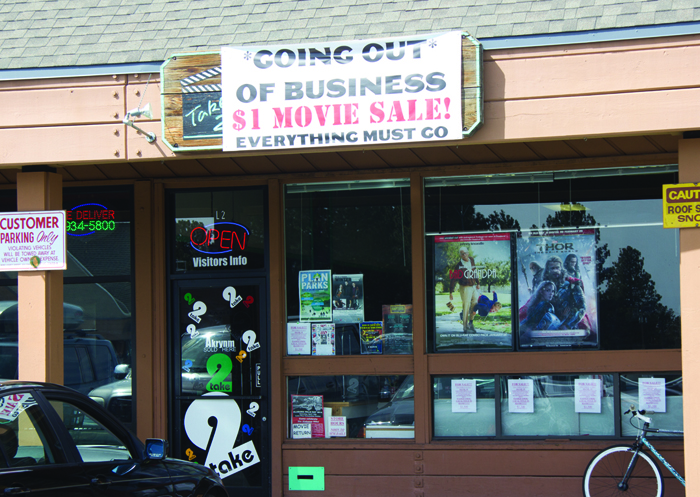 Take 2 Video will close at the end of this month.

Take Two Video’s Alex Miller says the video store located in the Do-It Center mall will close as of March 31.

He and partner Rob Vuke have owned Take Two for five years. The store has been in business about 15 years.

Miller said simply, “We’re closing ‘cause it’s the end of an era.”

He explained that the combination of a poor winter and competition from the likes of Redbox and Netflix were too much to overcome.

A retail storefront can’t compete with a machine that can dispense movies for a dollar.

Starting this past Monday, Take Two began liquidating its movie stock. All general stock movies are selling for between $1 and $3 while new releases/Blu-Ray titles are going for $5.

Of the thousands of titles they had, about half had been sold by Thursday.

Miller said he and Vuke both plan to remain in the area, and both have second jobs to fall back on. Miller also bartends at the Clocktower Cellar while Vuke works construction.

Bishop Vet is taking over the space once occupied Day and Night Pediatrics, as Dr. Maria King decided to close her office. She is still taking some house calls, but has decided to scale back her schedule and practice.