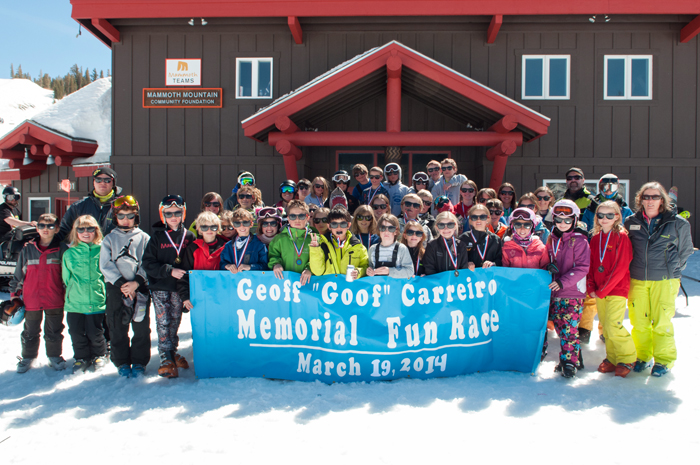 A list of components necessary for a perfect race would likely include: sunshine, bright blue skies, firm snow conditions, a hard working race crew and a field of very talented athletes. On March 15-16 the USSA U12 Mono Cup at Mammoth Mountain had just those things. To make it even more impressive, some of the fastest athletes to take on the super G course that came down World Cup onto Fascination were Mammoth Ski Team members.  On Saturday, two MMST girls made their way on to the award stage.  Sasha Mueller placed sixth and Anastasia Seator-Braun was eighth. In the boy’s division Lance Davenport’s time of 1:02.28 was good enough for second place behind Squaw Valley Ski Team’s Guthrie Goss, who had a time of 1.01:80; Aidan Le Francois came in eighth; and Leo Sarvey placed ninth.  On Sunday, Seator-Braun moved up to take sixth, while Davenport was able to find the fastest line down the course to come across the finish with a time of 1:00.27, 1.05 under the time of the second place finisher Goss; Le Francois moved up to take seventh and Sarvey landed on the front page for the second time with an 11thplace result. The U12s will compete alongside the U10s Sunday in the final Junior Village Championship race at Mammoth and then it will be on to the USSA U10-U12 Championships at Sugar Bowl, April 3-6. 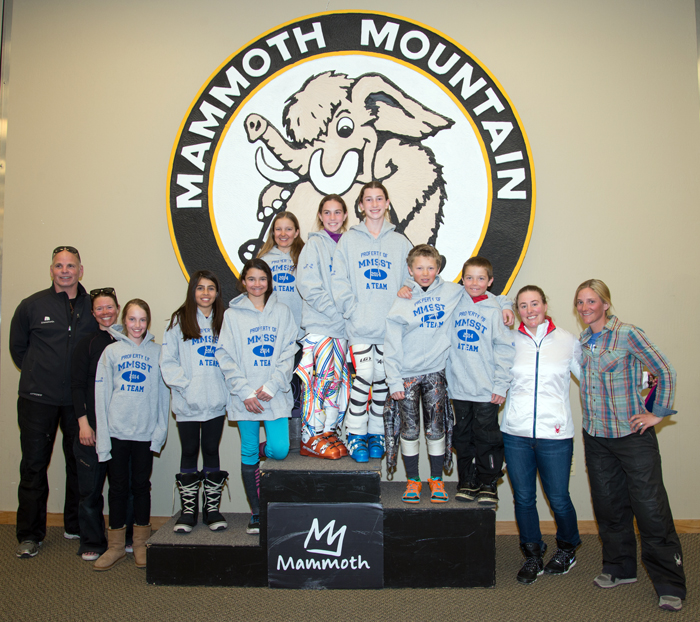 The Mammoth Mountain Community Foundation held the second A Team Award presentation on Saturday, March 15. Olympian Stacey Cook was on hand to congratulate the winners. Cook (second from the right) is shown here with the All-Mountain Charger A Team.

The Mammoth Mountain Community Foundation held the second of two A Team Award presentations for the season on Saturday, March 15. Athletes were nominated for this award by their coaches for demonstrating performance above and beyond normal efforts. They may have achieved a significant result in competition, or they may have made a major personal breakthrough in their training on the mountain. A Team athletes are known for exceeding the goals set in an environment of high expectations. 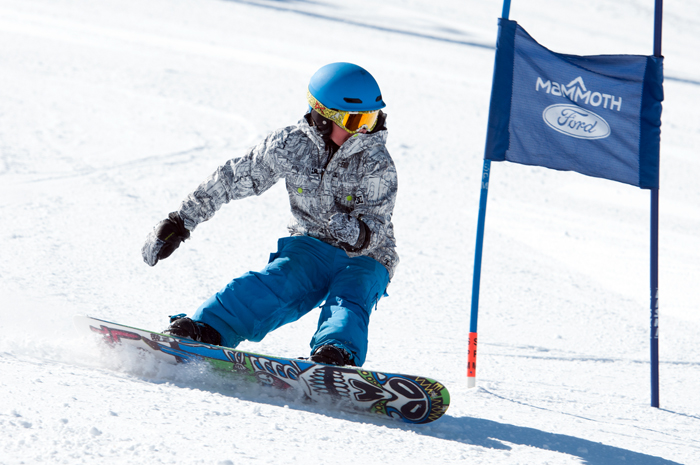 Jake Westfall on his way to posting the fastest time of the day for the snowboard division in the Fourth Annual Geoff Carreiro Memorial Fun Race, held Wednesday, March 19.

After the presentation several athletes were asked, what receiving the award means to them, U 14 racer Kian Sadat responded, “To me, being a recipient of the A-Team means that I have improved a lot since the beginning of the year. I am proud of myself for working so hard to improve.” He finished by saying, “Skiing is the main part of who I am, and it means the world to me to get acknowledgement doing what I love.” While ten year-old Daniel Steiner responded, “It means that I was listening to my coaches and working hard.”

Sugar Bowl Race Department and Sugar Bowl Ski Team and Academy hosted the annual Far West U14 Performance Camp, March 10-12. Fifty-four of the top U14 skiers from 12 ski teams took part in the invitation only event including nine Mammoth Ski Team athletes. Over a three day period the racers competed in three disciplines, slalom, super G and giant slalom with all of the Mammoth team members producing very strong results including: Mack Carkeet, who was third in the girl’s slalom, fifth in the super G and, third in the giant slalom. Her teammate Eva Yguico was eighth, 10th, and sixth in the same events. On the boy’s side: Cole Williams finished fourth in the slalom, ninth in the super G, and fourth in the GS; Sheldon French was fifth, 13, 11; Erik Eisen sixth, seventh, 10; James Gooch eighth, 14, DQ; Barrett Calvin DNF, eighth, third; Connor Staley DNF, fourth, sixth; and Luke Davenport DNS, 15, eighth.  The U14s are currently training for the 2014 U14 Championships scheduled for March 27-30 at their home mountain.

Three days after the Performance Camp a contingent of MMST athletes competed in the Far West Open Series GS races for second year U14s and U16-SRs at Northstar, March 15-16. Again the Mammoth racers showed their strengths with Eva Yguico placing second and fifth for the U14 girls. In the U14 boy’s competition, Barrett Calvin was second on the first day; James Gooch sixth and eighth; Connor Staley ninth and fifth; Cole Williams 12, fourth; and Erik Eisen took sixth in the second GS race. Delaney Kearns took ninth and 11 for the U16 girls. In the U16 Boys division Aidan Carrigan stepped up his game taking fifth and eighth; Duncan Reid was ninth the first day, but came back to take second the next day and Lachlan Anderson had two front page results finishing 11th and 12th. Other MMST racers who competed were Jack Fitch, Emily Steiner, Miranda Betts, Carrie Brody, and Rylie Whistler.  After the race, Aidan Carrigan, who had a break through weekend was asked if he had been working on anything special that helped him achieve his results. Carrigan responded, “I have been working with my coach Brett Allen on some drills that specifically help me to fix the problems in my skiing and then taking those skills and bringing them into the course.” Carrigan confided that,  “After the Northstar race I have found a sort of newfound confidence and motivation to keep competing.” He went on to admit, “My biggest goal for the season was to make JOs, so when I didn’t make it I figured I might as well make the Northstar race count for something. I saw it as my last chance to prove myself.” And prove himself he did.

Mammoth local and now “Olympian” John Teller edged his way into sixth place March 15 during the first of two skicross competitions at a World Cup double-header weekend in Are, Sweden.  Teller won his first two heats, but he couldn’t hold on to his lead in the semifinal, which advanced him to the small final. He then fought his way into second place, which was good enough for sixth behind race winner Victor Oehling Norberg of Sweden.

The athletes headed back the hill up for another skicross race the following day, where Teller skied into the top 20 behind Thomas Zangerl and Andreas Matt of Austria, who went one-two in the final with Armin Niederer of Switzerland third. The weekend results put Teller in 12th in the skicross standings, just 13 points from the top ten. This is the mark he will be gunning to reach next Sunday, March 23 when the men head to La Plagne, France for the World Cup Finals that will close out the skicross season. That will put Teller back in town just in time to take part in this year’s Mammoth Invitational.

Eight athletes represented Mammoth Ski Team at the Les Schwab Western Region Open FIS at Mission Ridge, Wash. The U18-U21 athletes competed in six races in three disciples over the six-day series from March 12-17. Traveling to Washington were Erin Maidman, Hannah Everson, Nikita Norton, Logan De Angelis, Austin Gumins, Alex Colby and Marco Lorico-Rappa. The international field was comprised of foreign racers attending college in the U.S. and younger racers from all three U.S. regions.  The competition was intense, but several Mammoth athletes cracked the top fifteen including: Maidman who took twelfth in both super-G races; Norton who took four top 10 results including 10th on the second super G, seventh in the first GS, fourth and ninth in the two slalom races; and Colby who walked away with and 11th in the second SG. Next week most of the team will be at home training for multiple races coming up in April, while Colby and Norton will be off to Sun Valley, Idaho for the Elite Spring Series.