Boy did he ever succeed.

Klassen first posted the video on YouTube on May 6 as a 3rd birthday present for Kinsley. It has since generated more than 617,000 views.

The video, approximately four minutes in length, has also been shown on Good Morning America, the Huffington Post, and 15 other major media outlets.

According to Klassen, it is trending to become the most popular snowboard video ever shown on Transworld Snowboarding’s website.

Question is, why are Mammoth Mountain and Mammoth Lakes Tourism so reticent to embrace the video, co-opt it, cross-promote, ride the wave?

Part of it could relate to some of the trick photography Klassen uses. In the video, he makes it appear like he’s doing flips and riding rails with his daughter in tow.

Some of the comments on YouTube, from folks not comprehending that some of it wasn’t real:

did this guy seriously pull off a rodeo while holding onto a two year old?!?!?

Lately everyone going crazy watching this edit ….yes is super fun …..BUT …..no one maybe realise how irresponsible and dangerous this thing is. You can be the best pro in the world , but you can’t put in dangerous the life of your own daughter…..just to have fun !!!!   Steve Klassen…..grow up please !!!!

But the most troubling comment came from this guy.

Does anyone know where was this video recorded ?

Klassen, who is not known for his reticence, said he is absolutely okay with MMSA or Mammoth Lakes Tourism using any and all parts of the video, re-branding the video, etc., but, he laments, “Unless they thought of it, they can’t embrace it.” 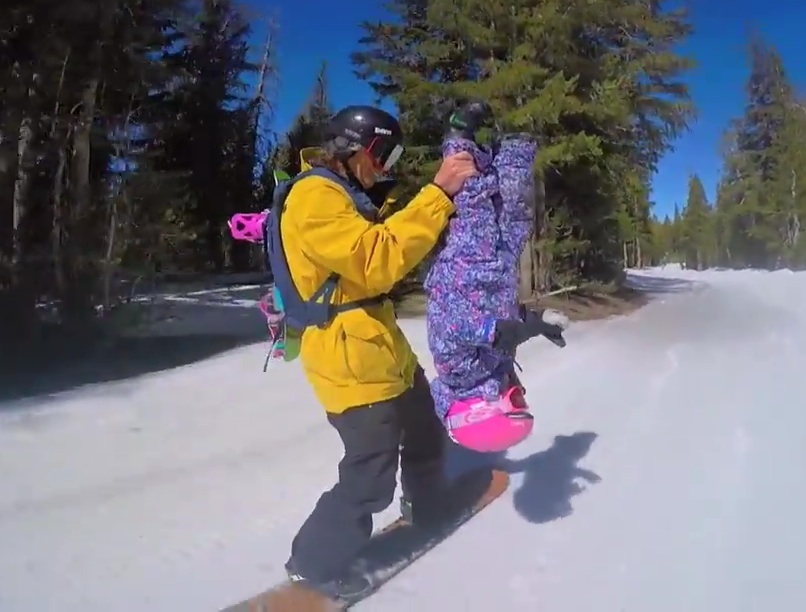 MMSA Communications Manager Joani Lynch said the Mountain has posted the video on the Unbound page of its website, but, she added, “it presents a challenge from a resort standpoint.”

As Klassen acknowledges, “For Mammoth, they don’t want people learning snowboarding like that.”

While Lynch said the Mountain is still having internal conversations about the best thing to do with the video, The Sheet could not even find the video posted on the Unbound page when we searched for it on Thursday.

As for Mammoth Lakes Tourism, Executive Director John Urdi said, “I’ve watched it and I think it’s very cool but we haven’t decided if we’ll use it. If you look at the comments, it’s a little controversial and I don’t know if we want to get into that game.”

Urdi said he has personally posted the video on his own social media outlets.

For Klassen, however, this wasn’t good enough.

“The problem with being employed by someone is that every move and decision is made with one foundational reason … to protect their job. They wouldn’t recognize creativity if it hit them over the head.”

The point of the trick photography was simple: “It needed edge if we wanted it to go viral.”

In a follow-up email on Thursday, Klassen said, “Please make sure there is something which talks about art, and it being my right as a filmmaker to stir emotions in whatever way I wish. It is what art is about. Todd Robertson (Wave Rave’s Art and Marketing Manager) and I stirred peoples emotions in a radical way with this one.”

As for the choice of the sunny, uplfting music, Klassen said “That was my choice. I wanted it to appeal to little girls.”