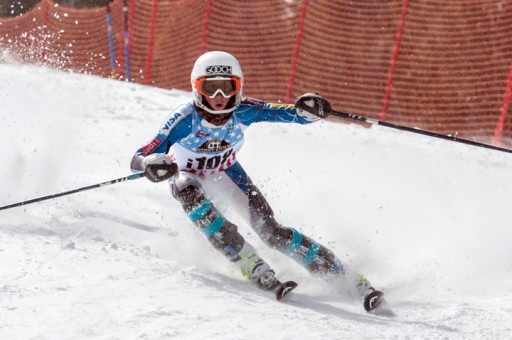 Barrett Calvin took first place in the Far West division at the 2014 USSA/FW U14 Championships. Photo by Susan Morning.

The U14 members of the Mammoth Mountain Ski Team, who began their competitive season on Dec. 27 at home and persevered through a difficult season plagued by lack of snow, race cancellations, and “resited venues,” found themselves back on their home mountain on March 27 for the opening race of the USSA/FW U14 Championships.

This season, in spite of the drought, every speed event at Mammoth was hampered by storms. The last speed race storm at the end of February forced the cancellation of the U14’s SG training run and their first race, leading Harry Blackburn, Mammoth Mountain Ski Team Director and U14 coach to say, “Schedule a speed event and you can almost bet it will snow.”

Just as Blackburn predicted, a storm moved in and the 2014 Championship SG was cancelled. But the super G wasn’t the only race in the series, and after four days the racers competed in three out of the four events with a number of Mammoth athletes landing podium spots.

On Thursday, March 27, Evin Haworth was 13th for the ladies in a snowy slalom, while Barrett Calvin, Sheldon French, James Gooch and Luke Davenport all placed in the top fifteen for the Men’s slalom, taking third, fifth, eighth, and 12th respectively.

The next day in the giant slalom the ladies faired better with Eva Yguico placing third; Mack Carkeet, seventh; Kendall Lach, 11th and Haworth just missing the front page in 16th. Six men made the podium stage, including five in the top ten. In this event Calvin moved up one spot to take second; Cole Williams was fourth; French, fifth; Gooch, sixth; Connor Staley, ninth; and Erik Eisen 11th.

The racers’ hopes of racing in the final day of the championships appeared doubtful on Sunday, after the mountain received almost 10 inches of new snow. But after several delays the race got underway.

Mammoth placed six men in the top 15 against 85 of the best U14s in the Far West division after the first run. After the second run, Calvin, who took first in the first run, held on to his lead to take the win, with teammates Williams in second; Staley in fifth; French in seventh; Davenport in 13th; Eisen in 14th and Cody Jayne, who placed 15th in both runs, only to be edged out by .16 to end up 16th. On the ladies side, Carkeet and Yguico held first and second after the initial run, with Carkeet leading by .22. In the second run Carkeet again dominated the race, while Yguico slipped to third. The pair ended up first and second overall.

Part way through the year-end awards ceremony, Mammoth U14 coach Kara Munsey came to the stage and told the story of a special young athlete who persevered through a very difficult time, never giving up. The young man she presented with the Far West Skiing- 2014 Andrea Mead Lawrence Sportsmanship Award was non-other than Mammoth’s own Cody Jayne.

The final award was the Alex Cushing Team Series Award. The Mammoth U14 team had consistently put members on the podium throughout the year, but Mammoth wasn’t the only team with winning athletes. The Squaw Valley and Sugar Bowl teams, which had traded the cup back and forth over the years, had their fair share of talented racers who made it regularly to the podium throughout the season.

Yet it was Mammoth’s U14s who won the overall cup for the first time in many years. As the team rushed to climb on the podium, Calvin, undeniably one of the shining stars of the U14 Championships, took center stage and raised the giant trophy high above his head. Just as he did, the wind picked up and the skies began to shower snow crystals like glittering confetti over the group of jubilant athletes.