On Friday, April 4, I consented to be buried alive on Mammoth Mountain. The purpose: to do a live training exercise with Chief, one of Mammoth Mountain Ski Area’s three avalanche dogs. Ski Patrol would bury me in a coffin-shaped hole, where I would wait until Chief located and rescued me.

My training exercise with Chief was just one of many that take place over the course of the season. Ski Patroller Scott Quirsfeld, Chief’s owner, said Patrol creates avalanche scenarios once a week with articles of clothing, or live subjects when the Mountain has a deep enough snowpack.

I’ll admit I was nervous. Like so many others who regularly ride the Mountain, I’m fortunate to never have been caught in a slide. I owe that good fortune to the efforts of Ski Patrol, which keeps the avalanche dogs on hand for those times when guests duck avalanche closures or head out of bounds on a powder day.

Chief’s owner and handler, Scott Quirsfeld, said Chief responded to such an incident earlier in the season. “Two guests poached Roger’s and triggered a significant avalanche,” he said. “Luckily, they weren’t caught in it.”

Quirsfeld described the avalanche dog program as we rode Chair 12 toward the hole he and Patrol had dug out of the week’s fresh snowfall.

Quirsfeld is the program’s de facto leader since founder Sean Macedonio departed the Mountain last year. Macedonio “recognized the need,” said Quirsfeld; “The time and commitment that it took is what held a lot of people back, and he made that commitment.”

The program is now nine years old, and its product is two certified avalanche dogs Chief and Atlas, and a new puppy, Duke.

Each dog has an owner and trainer who carefully selected their puppy from a breeder after putting that puppy through an aptitude test at 6-10 weeks old. The owners then raise the puppies, training them over the next several years, until they are certified.

Macedonio chose to adhere to the strictest Canadian standard for avalanche dog obedience training and testing. Now that the program is developed, a potential handler has a three year apprenticeship in which they shadow the primary dog trainer. Quirsfeld said the program requires this in part because prospective handlers need to know the level of responsibility required by the job.

Should the apprentice handler complete their three years, they can then become a primary handler with a dog of their own.

We reached the top of 12, and Quirsfeld took me on a short trip down to a cluster of trees below White Bark Bowl. I took off my snowboard and scooted down a narrow passage into a surprisingly spacious snow cave, where I stretched out and took one last look up at blue sky.

Quirsfeld had equipped me with a walkie talkie, which I would use to communicate with my caretaker, Ski Patroller Robert Oppor, and a rubber toy Chief would bite onto once he dug down to me. Chief would use the toy to simulate dragging me out.

I’ve never been claustrophobic, but as Quirsfeld lowered blocks of snow into the narrow opening, shutting out the light, I started to wonder if I might be. Quirsfeld had warned me he was going to pack the snow tight to give Chief a challenge: “I want to hear him bark,” he said. 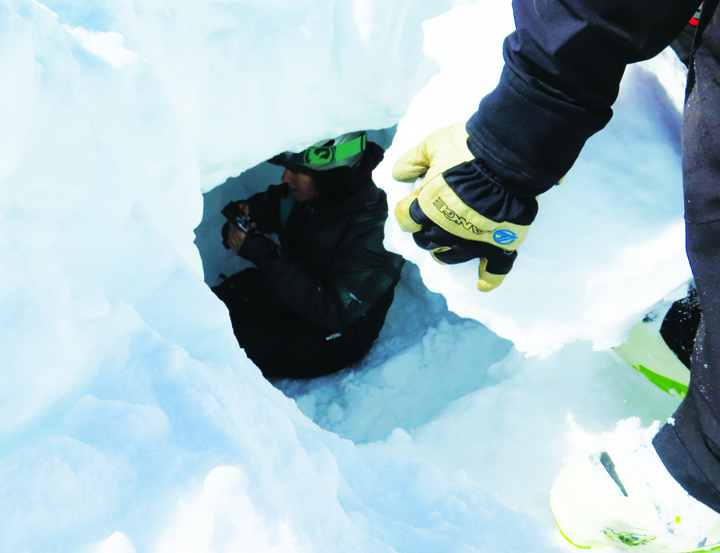 Sheet reporter Vane gets comfy in the snow cave while Ski Patroller Scott Quirsfeld lowers the first block of snow. Photo by Oppor.

Chief is a six-year-old Black Lab. The best breeds for avalanche dogs are Labrador, Golden Retriever, and German Shepherd, Quirsfeld said, because “they’ve got to have what we call victim loyalty; they have to really bond with people. A Lab, once they find a person … you cannot call the dog off.”

I held onto this idea for comfort as I settled into my snow cave. With the opening sealed off, I sat in a cold blue bubble, silent apart from my breath and the scrape of cloth on ice as I shifted my legs.

It’s remarkable how much a few feet of snow can separate you from the world above. Remarkable and frightening, particularly when I considered how much worse this experience would be in a true life-or-death situation. I at least had a walkie, and a Ski Patroller waiting 30 feet away, should I panic. Those trapped in a true avalanche, encumbered by ski equipment, turned around, and subject to possible trauma, would have considerably less.

When I asked Quirsfeld if there are any hard and fast rules for bettering your chances of survival, he admitted that it’s hard to say. “There have been cases where people have survived for up to two hours in an avalanche, and others not 15 minutes,” he said. Trauma is a factor, he added, as well as snow density.

Carbon dioxide is also a problem on Mammoth Mountain specifically. “It’s part of our protocol to test our [training] holes,” he said. Although snow is typically very porous, “That’s an extra precaution we take,” he said.

Quirsfeld’s key piece of advice: “It really helps to have a partner, even in a ski area. A lot of times, the person might just be in a shallow burial. Companion rescue is always the best and the quickest.”

Effectively caught, I waited for Chief’s rescue. Within twenty minutes I was comfortable enough to take a nap, but Ski Patroller Robert Oppor had other ideas. His job was to check in with me to see how I was doing, and to dig me out should I begin to have a panic attack.

He also admitted to a second motive behind my burial. This, he said, was how Ski Patrollers find their girlfriends. “We get a pretty, single girl, and we don’t let her out until she agrees to go on a date,” he said.

I ventured a guess that another snow burial might be necessary to keep that train moving. Oppor would neither confirm nor deny.

After about 40 minutes in the snow cave, Oppor told me it was time for radio silence: Quirsfeld had brought Chief up on Chair 12 and was going to let him loose in the area.

To my astonishment, it was less than three minutes after turning off my walkie that I heard the scrabble of Chief’s paws overhead.

Soon I heard the scratch of his claws as he went to work on the snow at the entrance, and I watched as the light came back to the cave, little by little, until two black paws and a black nose poked through. Chief had found me.

Once Chief and Quirsfeld had cleared away the rest of the snow from the entryway, it was time for me to come alive. I began to holler and shout, as Quirsfeld had instructed me to, while offering Chief the toy so he could “drag” me out of the hole. This positive reinforcement rewards Chief for his work. 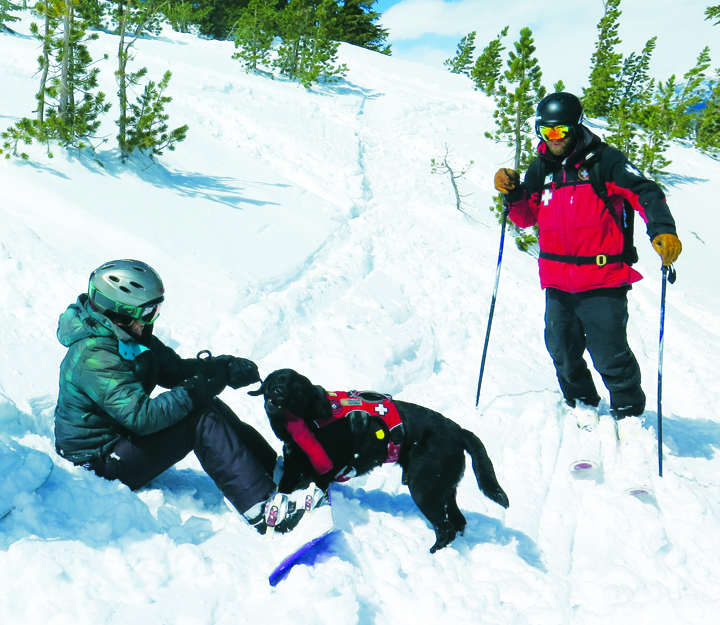 Chief enjoys a game of tug-of-war with Vane as a reward for another successful “rescue.” Photo by Oppor.

A further reward was our spirited game of tug-of-war with one of his favorite toys once I was safely out of the hole.

While I wouldn’t want to be buried by anything other than Mammoth Mountain Ski Patrol, with Chief waiting in the wings, I’d go under the snow again in a heartbeat.