Mammoth Lakes Tourism (MLT) is entering a new age of transparency, or so the organization’s Summer Kickoff Event on April 29 implied. Hosted by MLT Executive Director John Urdi, the Kickoff introduced a full house to Mammoth’s newest ad campaign, and offered insight into MLT’s approach to marketing the Town.

Urdi kicked off the Kickoff with both good and bad news, noting that MLT entered the winter with a $400,000 Transient Occupancy Tax (TOT) cushion, thanks to a third record summer. However, that boom was short-lived, and after a disappointing winter, TOT is down 14 percent, Urdi said. Anticipating such a shortfall, MLT staff had to cut about $300,000 from its annual budget, which is now roughly $2.4 million.

Cuts included not hiring a Chamber Director (MLT merged with the Chamber of Commerce last year), as well as reducing some advertising expenditures, “which we hate to do,” Urdi said. “Advertising is the last thing we want to cut.”

Meanwhile the Tourism Business Improvement District (TBID) fee also underperformed, down 22 percent, or $700,000, from Urdi’s prediction. Urdi said he had projected collecting $3.1 million through March; the reality is $2.4 million.

Because of the late start collecting TBID, Urdi said MLT won’t begin using that funding source until next winter. When it is used, a portion of the TBID will go toward the Town’s air service subsidy. That subsidy was about $3 million this winter, with MLT paying up to $1.5 million and Mammoth Mountain Ski Area covers the rest. The subsidy was about $850,000 for the summer of 2013.

The remainder of TBID will go to marketing. 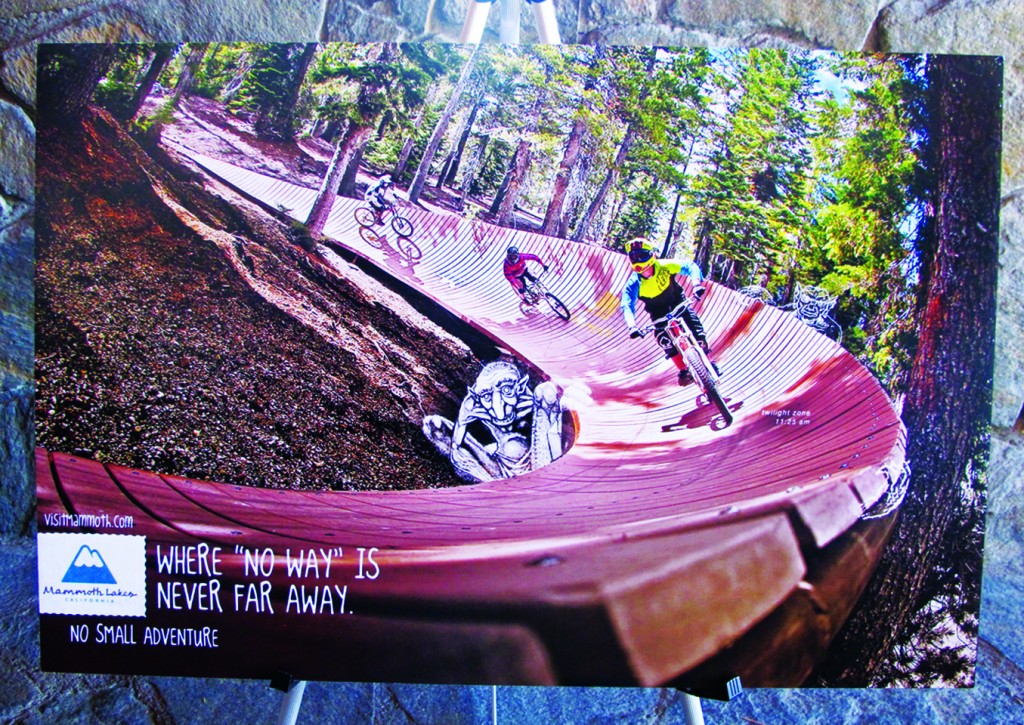 One of the two examples of MLT’s new “No Small Adventure” advertising campaign, rolled out at the April 29 Summer Kickoff Event. Note the troll in the center. Photo by Katie Vane.

Yet Urdi also noted some of the success stories generated by MLT’s current budget, such as a new ad campaign rolled out at the Summer Kickoff. The “No Small Adventure” campaign features sketched, fantastic creatures like trolls and dragons superimposed on landscapes and action shots. The effect is surprisingly whimsical and fresh.

Urdi acknowledged that the campaign could be divisive. “People [may] decide to hate it just because it’s different, and that’s fine,” he said. “… Never once in my career did I think I’d please everyone.”

The campaign is the result of a partnership between MLT and MeringCarson, an advertising agency based out of Sacramento and San Diego that counts the City of San Diego and Visit California among its clients.

MeringCarson conducted a survey of locals and visitors, using focus groups that included “everything from business owners to bartenders,” Urdi said, to determine what Mammoth means to those who live and recreate here. The result: an overwhelming impression that Mammoth is “mother nature’s adventureland,” from which the new “No Small Adventure” campaign was born.

According to a 2013 Adventure Tourism Study, about 42 percent of travelers from North and South America and Europe cited adventure activity as their last trip’s main activity in 2012; that’s up from 26 percent in 2009.  Urdi said the new campaign will help MLT tap into that market.

Thus far, MLT’s marketing efforts appear to be paying off. According to a Leisure Trends study last year, the return on one dollar spent by MLT to market the Town is $176 in direct spending. That number is up from $136 the year before. Urdi said that this equates to $4.82 in tax revenue per $1 MLT dollar, up from $4.02 two years ago.

Urdi also said that MLT used a more conservative estimate of the expense of marketing, including not only the ad placement, but also the money spent to research and design the ad. “We didn’t want to fluff up the [return on investment] number,” Urdi said.

Urdi’s final announcement at the Summer Kickoff was the creation of a new website, MLTindustryinsider.com, which will collect data formerly released in a monthly report sheet and make it more readily available to the public.

The website will detail MLT’s advertising campaign, allowing visitors to see what MLT currently has out in the marketplace, what impressions those advertisements are getting, and whether the ads are successful or not.

This will include newspaper and magazine articles written about Mammoth, with the advertising equivalent potentially included (for instance, Urdi said that an LA Times article written free of charge last year would have cost about $300,000 for comparable advertising space).

“We had an opportunity, with such a dramatic change in our budget [with the addition of TBID] and focus, to show people that the money is going to a good cause; it’s going to a professional effort,” Urdi said of the Summer Kickoff Event.

MLT will host a Winter Kickoff later in the year, “So people can know what we’re doing, and also know how they can participate,” he said.