So I’m heading across the street, going towards the Outlet Mall, when I encounter two backpackers, a couple, standing just beyond the crosswalk at the side of the road holding a “395 North” sign.

So I tell them, “Hey, you may wish to walk down the street and hitchhike past the McDonakd’s – maybe by the large, awesome Gateway monument sign where I would also suggest you take a picture and tweet it to your vast following.”

Okay, so maybe I wasn’t that obnoxious, but I suggested a different location. And then I added, “And if you really want to assure yourselves a ride, it’s really not that far a walk down to the northbound highway entrance.”

To which the guy replies, “No way. That’s way too far.”

I leave, shaking my head, thinking to myself, “It’s not enough that you’re looking for a free ride. It’s got to be a convenient ride requiring no extra effort.”

This is a red flag to me. If I’m the girl’s father, I say dump this twit.

Speaking of backpackers, Sheet writer Angela Evans notes that the smell-o-meter inside local establishments has been registering higher levels of late. The other day, she went to get a package at the post office and the sun was pouring into the lobby and it was stifling hot and there were about six backpackers waiting in the counter area.

She described the scent as not quite roses.

Responding to a bear call, he witnessed a woman walk out of her front door, around to the back of the house, stop and begin tossing carrots to a group of three bear cubs wrestling on her back lawn.

When asked why she was feeding carrots to the bears, the woman said she had feared for her life, what with the bears outside playing on the lawn and she and a young girl (daughter or granddaughter) inside a locked house filming them.

As Searles was writing up the citation for feeding the bears, he asked her if she was sure that she wished to stand behind her statement. She replied by saying that yes, she stood by her statement, and that the young girl had been absolutely hysterical about the bears, thus leading her to take decisive action … by feeding them.

At that precise moment, the young girl skips out of the house, clearly happy about seeing the bears. Oops.

In response to a few phone calls, here is a report on the College Parkway repaving project: 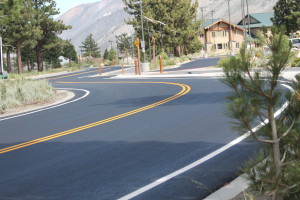 College Parkway, a loop that connects Cerro Coso Community College to Meridian Boulevard, has been repaved at a price tag of $1.2 million according to Steven Krystek, Office Manger at Mammoth Lakes Foundation, although he did say that’s only the number he heard.

“It was badly damaged from wear and tear,” Deanna Campbell, the Director of Eastern Sierra College Center, which is overseeing the project, said. “There was erosion and two inch cracks.” She couldn’t confirm the price of the project.

Campbell said the College worked with the Town in order to make sure the new road will meet Town standards, and they have added a bus pull out right in front of the campus. A year ago, the College petitioned Town Council to take over maintenance of the road, which they denied. “It truly is a Town road,” Campbell said.

Campbell said the College routinely re-seals the road, which experiences erosion from the winters and the direct sunlight in the summers, but this is the first time they have repaved it since the road was built more than ten years ago.

Finally, ever since Katie Vane wrote the following lead to a story on Development Impact Fees last December, I’ve been meaning to follow up. Her lead was as follows:

This followed a comment Gregory made at a Town of Mammoth Lakes/MMSA Liaision Committee meeting on Nov. 11 where he said, “DIF is the stupidest way to fund a project.”

At the time, I found the statement jarring because I could’ve sworn that this was contradictory to statements he’d made historically, but of course, I got busy and distracted and forgot about it.

Until yesterday, when in the course of tidying the office, I happened to glance at the October 29, 2005 issue. Headline: Gregory Gives State of the Union Address. This was just weeks after Starwood Capital had acquired MMSA. This is what Rusty said:

Given this compressed time frame, Gregory said it is more important than ever for the Town of Mammoth Lakes to make sure developers make a good return, exact stiff fees from developers for the privilege, and make sure the fees are spent in the right areas (specifically housing).”

Further research revealed that by 2007, Rusty said MMSA’s pro formas indicated it could pay $21,000/unit of DIF … which, of course, isn’t zero.

As a new Council prepares to take office next week, perhaps it would behoove that Council to consider whether or not it agrees with Gregory’s apparent philosophical evolution on the topic of DIF.